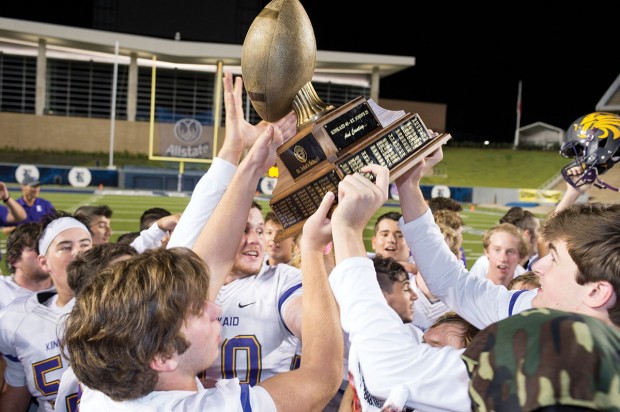 PROUD FALCONS In the 66th meeting  between the two schools, the inaugural McMillan-Lee trophy was awarded to the Kinkaid Falcons with their 42-9 victory over rival St. John’s Mavericks. (Photo: David Shutts Photography)

In a season in which the Episcopal Knights dominated virtually every opponent, there was one final hurdle they couldn’t quite clear, as Episcopal dropped a 57-39 heartbreaker to Fort Worth All Saints’ Episcopal in the SPC 4A championship football game.

“We had an incredible group of seniors who were great teammates and tremendous leaders,” said Knights head coach Steve Leisz. “Even though injuries were a big part of our season, our guys came out of the blocks and battled hard each and every game. We put up a lot of points and beat some really good teams this season, including some big UIL public-school programs.”

Senior quarterback Gavin Geib threw 32 touchdown passes this season, while junior receiver Jaylen Waddle scored 30 touchdowns for an offense that averaged an amazing 55 points per game. Defensively, Jack Graham led the way with four interceptions. “We also had so many guys step up, especially with all the injuries,” said Leisz. “Camden Miller did an outstanding job at running back when we lost Jake Levrier for several weeks.”

Liesz also had high praise for 6-7, 300-pound offensive tackle Walker Little. “Walker was just sensational. He not only blew defenders away on offense, but Walker also played a lot of defense for us. For a big guy like that to dominate on both sides of the line of scrimmage is pretty impressive. Our kids just played hard and left everything on the field.”

It wasn’t a championship victory, but it was a special trophy presentation following the Kinkaid Falcons’ decisive 42-9 win over St. John’s in the 66th annual meeting between these tradition-rich rivals. The inaugural McMillan-Lee Trophy, which was named in honor of the two legendary coaches of the respective schools, was proudly accepted by the Falcon players after the victory.

“Those are two great men who created this rivalry,” said current Kinkaid head coach Nathan Larned. “Coach McMillan is a legend at Kinkaid and a mentor to me. He’s a coach I truly love and respect. For us to bring this trophy home with his name on it is special.”

The Falcons dominated the game itself despite being without two of their best offensive weapons in quarterback Matthew Maggi and running back Johnathon Thomas, who were both sidelined with injuries. Sophomore running back Josh Williams led Kinkaid with four touchdowns on the night while also making several big plays in the defensive backfield as a two-way starter. “Josh pounds the ball, runs hard, and has great agility and vision,” said Larned. Meanwhile, junior quarterback Zach Evans played a flawless game while stepping in for Maggi. “Zach did a tremendous job managing the game. Really, it was an all-around great team effort.” 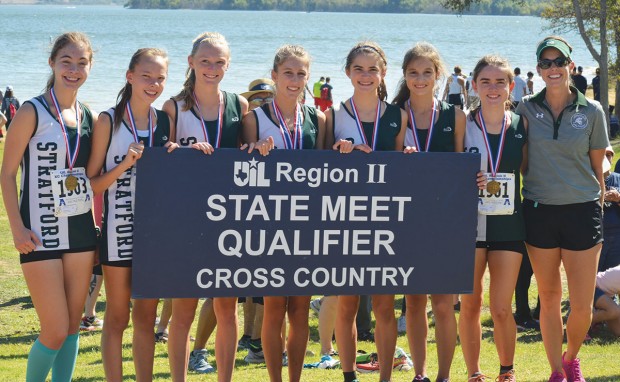 ON THE RUN Despite moving up from Class 5A to 6A this season, the Stratford Spartans once again qualified for the state cross country meet with a strong third-place finish at the 6A Region II meet. Pictured (from left): Maddie Harms, Hope Sage, Sydney Lawrence, Grace Custer, Faye Gibb, Olivia Hirst, Ella Gibb and Coach Jennifer Clouse.

Despite a move up from UIL Class 5A to 6A, the Stratford Spartans girls cross country team proved that it can more than hold its own against the state’s top teams. Stratford, which finished fifth in the state in Class 5A last season, dominated the District 15-6A meet before finished a strong third at the UIL 6A Region II meet. The Spartans missed out on second place by a mere four points. “Our girls welcome the stronger competition,” said Spartans girls cross country coach Jennifer Clouse. “It’s actually made us a better team. They’re actually pretty fired up to run against the state’s best.”

Leading the way for Stratford this season has been sophomore Grace Custer, who finished fourth overall at the regional meet in a time of 18:47.19. “The thing about Grace is that she’s just such a competitor,” said Clouse. “She pushes herself to the limits and just gives 110 percent every single time she races.”

“For us to finish in the top three without a single senior on the team is pretty exciting,” said Clouse. “We ran three freshmen, two sophomores and two juniors at regionals, which is pretty amazing. We’re still learning how to run in those really big races, but our girls set their goals and have been up to every challenge.”