From camp crush to a lifetime 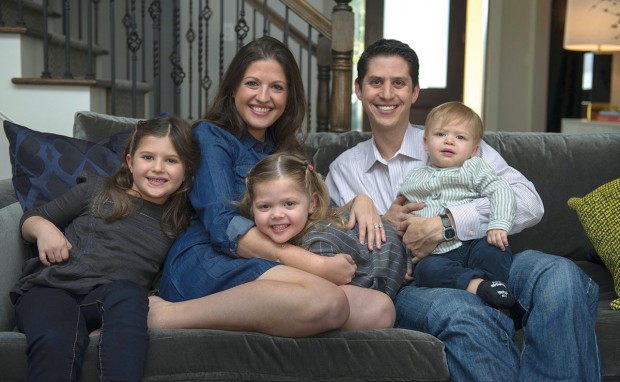 Debbie and Arturo Karakowsky are married with three children (from left): Noa, Liv and Eli.

If there were ever a blueprint for summer romance, it would have to be summer camp. No parents! No school! No rules! Okay, maybe rules, but the kind of rules that encourage kids to step outside their comfort zones and try new things. It just works. At least for the summer.

But not all camp romances cool with the temperatures. Sometimes, love strikes and stays.

Every summer growing up, Debbie (Forkowitz) and Arturo Karakowsky attended Camp Young Judaea in Wimberley. Debbie, a recently retired attorney, remembers being just 6 or 7 when she left her home and family in Waxahachie to spend a few weeks as a camper. Arturo, a financial advisor, started camp when he was just slightly older that that, maybe 10 or 11, as one of a large group of Mexican children making the trip to Wimberley from Monterrey. But Debbie and Arturo attended different summer sessions, so they never knew each other as campers.

Fast-forward several summers to 2001, when the two returned to Young Judaea as high school graduates and counselors. “We became really good friends for years,” Debbie says. “Every single summer, we returned back to camp because we were both passionate about it.”

It took them four years of summering together as counselors, but finally the friends began dating. “I think over the years we had different times when we were both interested, but someone always had a boyfriend or a girlfriend,” Debbie says. “That summer after we graduated from college [in 2005] was just a good time for us to start dating.”

The two spent a semester together at The University of Texas at Austin, he as an exchange student and she in law school, and then they dated long-distance until becoming engaged in 2007. 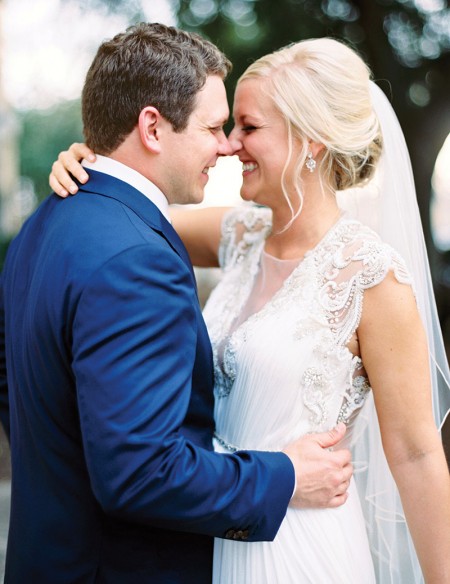 Camp continued to play an integral role in Debbie and Arturo’s life together.

“If you go to summer camp every year, the closest relationships in your life will usually be connected to camp in some way,” Debbie says. “For me it’s just natural that my husband is a part of that community.

“We knew each other’s best friends and exes. We became close a lot younger than marriage age, so it fostered a different kind of relationship before we ever entered a romantic relationship. By the time we started dating we were probably already in love.”

Ali (Donelson) and Ben Monk might say the same thing. The two met their first year working on the summer staff at Camp Ozark in 2009 (they both still work for the camp). Ben was a longtime camper, and it was Ali’s first experience with the camp.

“We were like best friends,” Ali says. “We worked on the same team, so we’d work together all year and go to camp together all summer. I actually realized I had a crush on him over Christmas break of year six. After that, I talked to him in the office and said, ‘Maybe we should think about this.’”

“We wanted to be totally sure if we were going to move from best friends to something like that,” Ali says.

“What was awesome about the whole thing was that we got to know each other really, really well working in an amazing environment,” Ben says.

“I got to see this really cute guy hang out with a bunch of 7 year old boys who really looked up to him,” Ali says. “There’s nothing more attractive that that!” The two married on Feb. 20 of last year, with over half the wedding party – and the officiant – a part of their camp “family,” as Ali and Ben describe them. 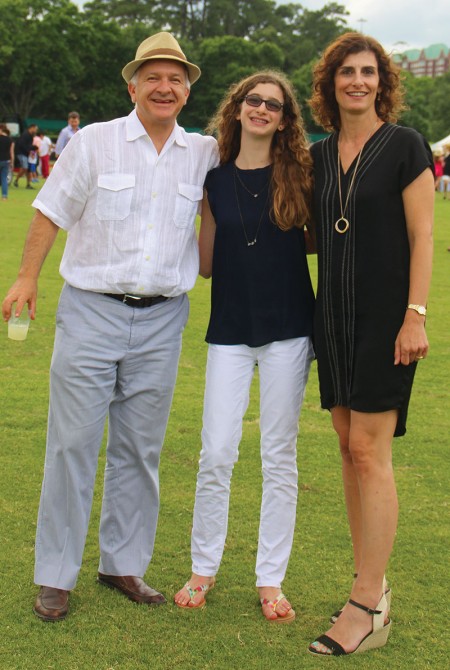 Working as counselors at camp in Maine morphed into lifetime love for Andy Edison and Donna Lax-Edison, here with their daughter Shelby (center).

It didn’t take quite as long for summer sparks to fly for Donna Lax-Edison and her attorney husband Andrew Edison. The two met when both were counselors at Forest Acres and Indian Acres in Fryeburg, Maine. Donna, who grew up in Michigan, started attending the camp when she was 12, while Andy, a Houstonian, came in at 19 as a counselor. “We met during counselor training,” Donna says. “I was wearing a Detroit Pistons shirt, and he is a really big sports fan. So we started talking about the Pistons, and he was impressed that I actually knew something about sports.

“We spent a lot of time together during training week,” she says, explaining that they lived separately, she at Forest Acres, the girls’ camp, and he at Indian Acres, the boys’ camp. “We didn’t have the same day-off schedule, so we would trade with other people so we could go out together. There was this thing called the Pony Express between the girls’ and boys’ camps, so we’d write letters to each other, and we also could call back and forth. People would hear us and make fun of us.”

At summer’s end, the couple went their separate ways, he to his second year at Dartmouth and she to her first at the University of Michigan, but they decided to remain exclusive. “I’m sure Andy was terrified because I had never been to college,” Donna says. After college came more distance – law school in Virginia for Andy and a move to Washington, D.C., for Donna. But three more summers as counselors brought them together at camp, as did long weekends and holidays. “We had a long-distance relationship until we got married,” Donna says. “Now we’ve been married for 22 years and have known each other since 1988.”

While Donna says she didn’t go to camp with any thoughts of meeting a boyfriend or future husband, she does recommend the job highly. “It’s one of the best jobs in the entire world,” she says. “I know kids think they should get internships for their careers, but think about camp: One, it’s a blast; two, all meals are paid for; three, they do laundry for you; and four, you get to meet people. It was obviously the best experience for us.” 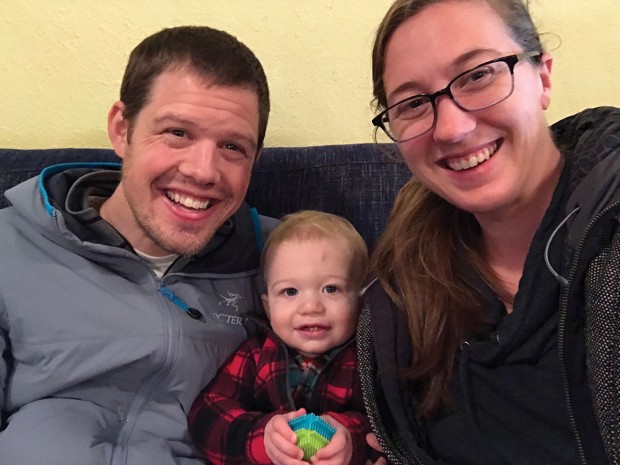 Matt and Christina Buzby met as counselors at Camp Cho-Yeh in Livingston. Now they have a 1 year old, Brooks, and are expecting another baby.

For Christina (Strider) and Matt Buzby, who met as counselors at Camp Cho-Yeh in Livingston, camp has become a theme in their seven-year marriage. “Matt [now a business management consultant] brought me on my very first camping trip at the end of our second summer at Cho-Yeh,” says Christina, a personal trainer in Portland, Oregon. “So for our wedding cake, he had a tent made at the top with us in it. The cake lady suggested wildlife themes, and Matt really wanted a bear on top of the cake. I didn’t, but the cake lady made it work, and I’m really glad she did.

“Now, we do a small wedding cake every year to celebrate our anniversary, and the cake topper is always a bear theme. It’s funny, because I didn’t want the bear originally, but here we are.”

Which all goes to show that you never know when summer love will turn into a lifetime of summers together. 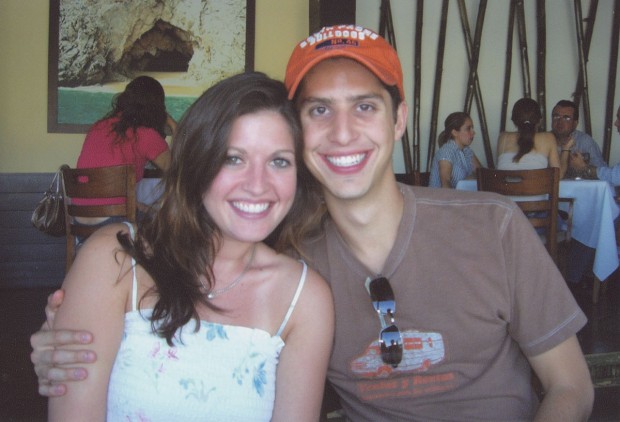 Debbie and Arturo Karakowsky met when the two were counselors at Camp Young Judaea. 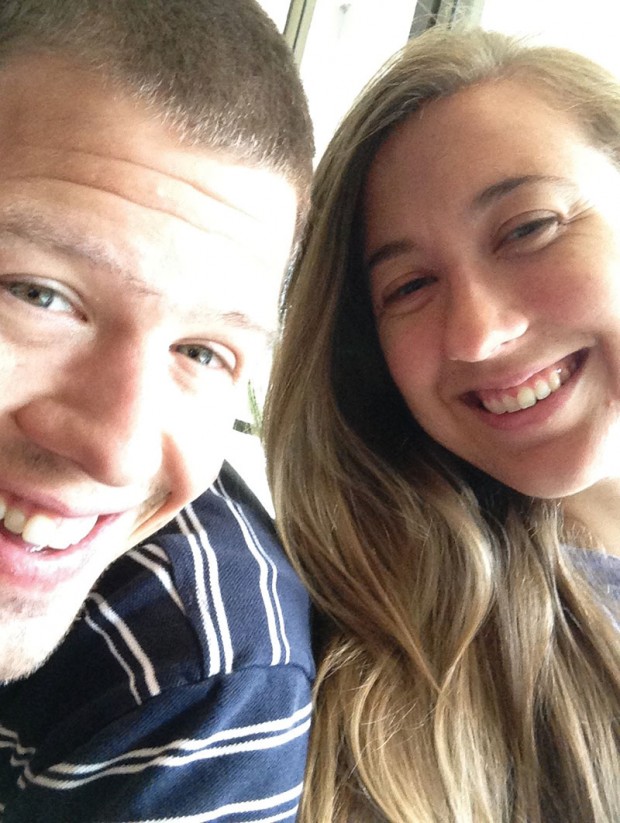 Matt and Christina Buzby met as counselors at Camp Cho-Yeh in Livingston. Now they have a 1 year old, Brooks, and are expecting another baby. 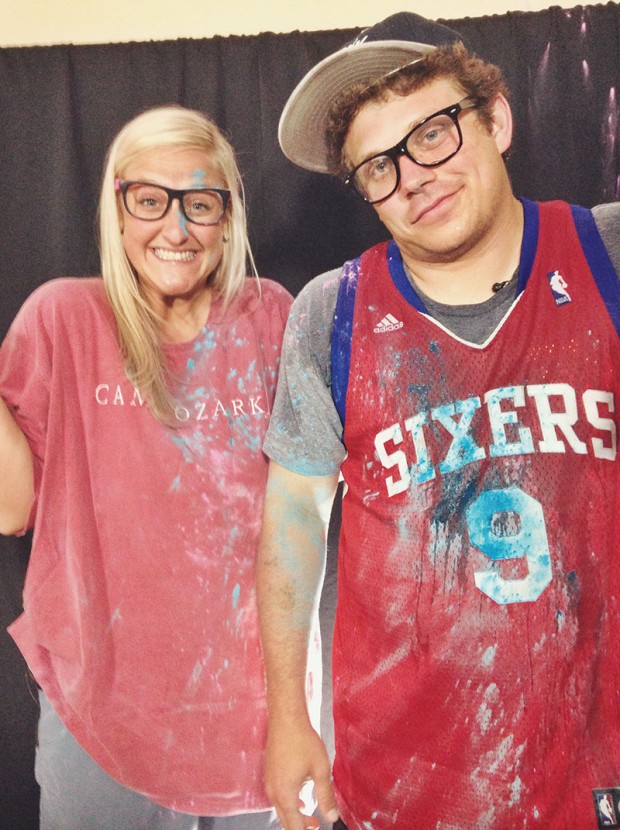 Ali and Ben Monk, who met at Camp Ozark, celebrate their first wedding anniversary this month. 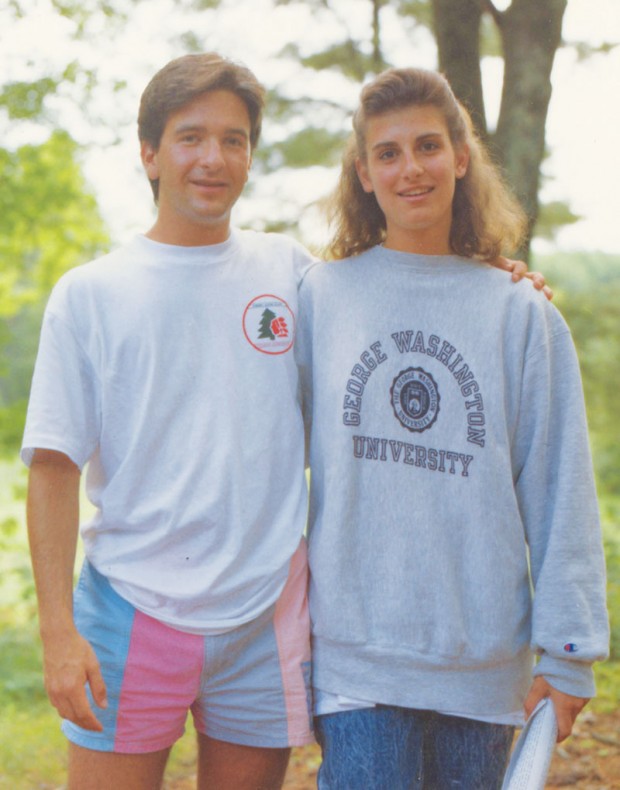