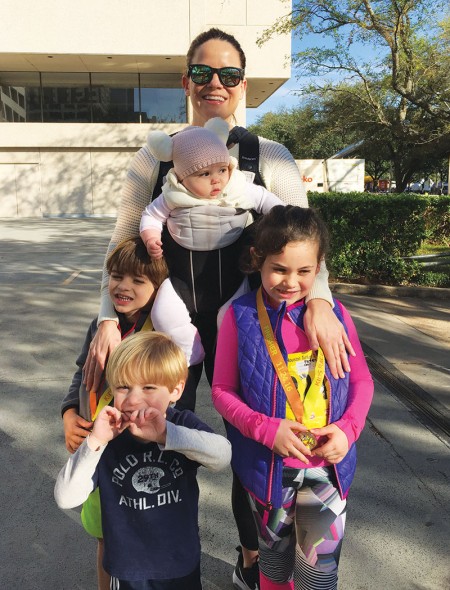 A MOM WITH A PLAN Brady Peters – with children Cullen, 6, Zach, 5, Kelly, 2, and Bennett, 6 months, keeps to a routine to handle the stressful witching hour.

It’s 3:44 p.m. My toddler twins and even my dogs are following me around the house. Everyone is whining, tired and bored. It’s the dreaded witching hour.

I open the drawer where I stash toys, stickers, lollipops and even bones for the dogs. I throw the dogs some raw hides, grab my bag and throw some snacks in. The kids and I vacate the premises while the bored pups assume their chewing positions.

Staying in the house during witching hour – typically anywhere from 3 p.m. until dinnertime for us – is the equivalent of listening to nails on the chalkboard for hours.

We venture to a park, Gymboree Play and Music, or the Trotter Family YMCA. I used to have Target on this list, but that expensive habit had to stop. Some days, we stay at home and just bear it.

For Buzz mom-of-two Holly Loftin, the dreaded afternoon slump has involved a fire extinguisher. Her son Cort is 5, and daughter Cooper Claire is almost 3 months. One evening, her husband Aaron was working late while she was preparing dinner with the kids. “It was actually my second day home alone with both kids,” said Holly. “Cort was playing with a toy that wasn’t doing what he wanted it to do, so he threw it across the room and broke it. He was hysterical and screaming so loudly that he woke up the baby, and she started crying.”

Holly rushed to calm everyone down but as she did, she started to smell smoke. “I went into the kitchen and realized that the oven was on fire.” Olive oil had leaked through the potatoes’ aluminum foil and caused a fire. “I had to grab the fire extinguisher, put out the fire, all while everyone was still screaming.”

Holly said she has learned “less is more” when it comes to the more difficult hours of the day. “I have found the less I am doing, the smoother things run; multi-tasking hardly ever works out during these hours. Being prepared as much as possible is key, having dinner already made and bottles prepared.”

Brady Peters, a mom of four, says her witching hours can differ due to the varying ages: Cullen, 6, Zach, 5, Kelly, 2, and Bennett, 6 months. “Just this morning, about five minutes after I woke up, [Kelly] had a meltdown that lasted a good 15 minutes.”

She said to handle typically challenging times, she likes to keep a routine. “I have found these Kenson Kids ‘I Can Do It’ chore charts on Amazon. The kids are really into earning stars for their charts, and [I take them] to Target when they reach a certain goal.”

Sometimes, routines can be difficult. “My husband [Dan] is always telling me to be more in the moment,” said Brady. “But, right now I really like knowing that the kids eat dinner at 5 p.m. and bedtime is at 7 p.m. It helps me feel like I’m more in control, and even if it’s a false sense of security, I’ll take it.”

Michelle Collins, mom of Coralyn, 3, and Joel, 16 months, and a licensed professional counselor, says her family’s most difficult time of the day is first thing in the morning, which presents a big challenge for her because she is “not a morning person.”

Her “worst-case scenario” is waking up late and not being prepared for the day. “If I am [being] super mom, the tactic is getting up 30 minutes to an hour before the kids wake up, so I have time to compose myself and think through the day,” said Michelle.

“Another tactic is to give my kids eye contact as much as possible in a hectic morning. I get on their level and listen carefully to what they are wanting. [This] takes like one minute each, but when [Coralyn] is about to melt down, slowing down and connecting with her makes a huge difference.”

Michelle’s kids, like most others, can also have rough afternoon and early evening hours. “Going outside can be the only thing to calm my babies down sometimes. Getting them away from the playground is another story.”