Emery Presents 'It Shoulda Been You” 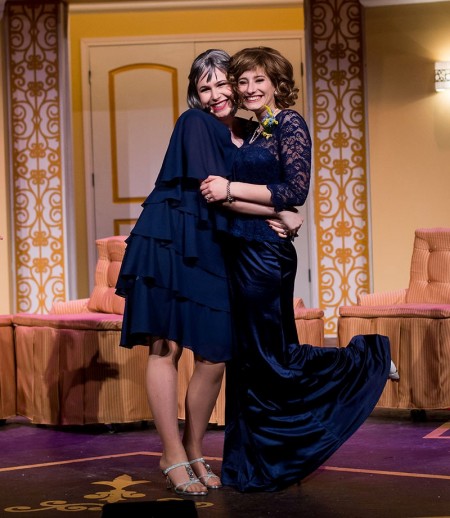 Students Audrey Goodman and Hannah Golub performing in "It Shoulda Been You." (Photo: Katie LeFave)

A Jewish family prepares for the big wedding day with their “favorite daughter” and not so favorite “potential groom.” This past month, the Emery/Weiner high school performed “It Shoulda Been You,” a play written by Brian Hargrove and music by Barbara Anselmi. It was one of the most enjoyed plays in all of Emery’s history, said Emery senior Lexi Spolane. The play encompassed gender equality, gay rights, teenage daily issues and so much more that is not in your normal Broadway show, nor a student production.

The interesting thing about this play is that Emery is the first school to get the rights to perform the play at a high school.

The play revolves around a Jewish wedding, and the play-by-play that the family undergoes leading up the big moment. The main role played by Sofia Heyl, who played Jenny Steinberg, was the daughter who was not the one with the ring on the finger, but who considered herself “unwanted” in her own means. Later in the show she realizes that her sister's ex-boyfriend, (Ryan Bronston as Marty Kaufman) is the one who has been in love with her throughout her whole life. The first act revolves around the struggles of Jenny as a teenager and young adult, Brian trying to get his father's approval prior to the wedding and George’s awkward attempts to connect to his son. Most of all, a crazy mind boggling scene at the wedding reception. See a quick summary of the play here. Senior Lexi Reichstein says, “The play was had a great message behind and was one of the best plays I have seen in all of my years at Emery.”

The show was performed three times, on a Saturday, Sunday and Monday. After the Sunday production, The Montrose Center of Houston came and spoke about how to be allies at Emery. They also spoke about how to not be bystanders when we notice something out of the ordinary. Also, they described the different themes of the shows and how to apply them to our everyday lives as teenagers. We learned how to get involved out of just school organizations to help kids that are coming out, like the Montrose Center or PFLAG. The Montrose Center empowers our community, primarily lesbian, gay, bisexual and transgender individuals and their families, to enjoy healthier and more fulfilling lives.

Overall, “It Shoulda Been You” was a great Emery Production thanks to Jennifer Bauer Conley, Cath Elder, Walker Fair, Nishta Mehra and of course the great cast. I hope one day you can see the show with your own eyes!