Careers for adults with autism 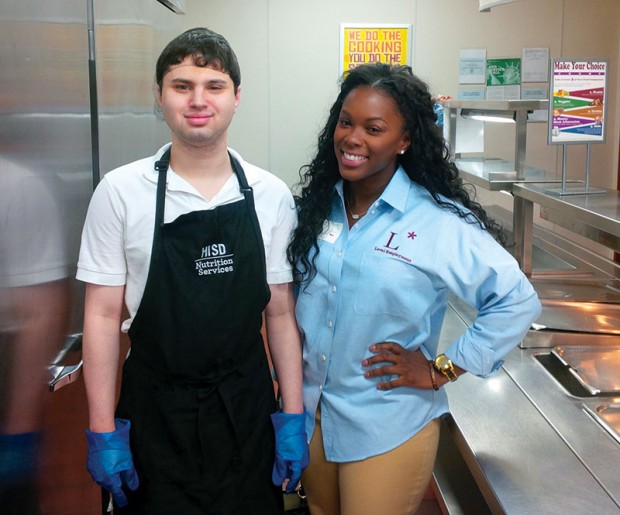 SKILLS Ryan Blake worked on organizational and workplace skills with job coaches, including Porsche Abraham from Level Employment Services, for his job with HISD.

“I like having a job and making my own money.”

This simple, succinct statement is from Ryan Blake, a young man for whom employment is important, if not precious.

When Ryan landed his first position in October near his Meyerland home, at HISD Food Services, it was a milestone worthy of celebration. The 22 year old has spent the better part of a decade training for that critical moment.

His personal challenges are daunting – autism, obsessive-compulsive disorder and late-onset Tourette’s syndrome. “Ryan paces like a panther and talks to himself. Talking to himself is okay. You can still get your work done. But if you’re pacing, how do you get your work done when you’re walking around?” said his mother, Judy Blake, a coordinator for Disability Leadership of Houston, a project of Family to Family Network.

But with a job coach and a little advocacy from his mother, Ryan is successfully working part-time and beating the odds that have kept many disabled young adults from earning a paycheck.

“They can’t be at home playing video games, or they can’t be in these sheltered workshops making 50 cents a day,” said Judy. “I think a lot of it has to do with employers being more open minded. It’s getting better, but there is a lot more that needs to be done. Maybe if there were just incentives for employers to hire people with disabilities.”

Autism Spectrum Disorder (ASD) is a group of complex disorders of brain development characterized, in varying degrees, by difficulties in verbal and nonverbal communication and social interaction, and sometimes repetitive behaviors.

Recent research published in the Journal of American Child and Adolescent Psychiatry found autistic adults have among the worst employment outcomes compared to people with other disabilities. Young adults with autism earned an average wage of $8.10 per hour, researchers found, and two-thirds had neither a job nor educational plans during the first two years after high school, a condition which continued for more than a third of them into their early 20s.

“Starting in the early to mid-1970s, there’s been a historic shift in the balance of jobs in the manufacturing sector to the service sector,” says Paul Shattuck, an associate professor at Drexel University’s School of Public Health, who led the study. “And those types of jobs, which require lots of social interaction, are exactly the types of jobs that people with autism have difficulty with.”

“You can go to school. You can make good grades, but you can still end up on the couch,” said Louis Geigerman, a Meyerland resident and special-education advocate who created a lecture series at the McGovern Medical School at UTHealth to showcase those on the autism spectrum who have been successfully employed as well as employers who have discovered the advantages of hiring them.

“The public schools’ mandate is to prepare kids for further education, independent living and employment. Really a part of that should be helping and providing internships for these kids in high school. They should be preparing them for employment. They are not doing that well enough, and parents aren’t putting enough pressure on them to do it,” said Geigerman.

Memorial-area resident Ryan Dole has been at The Monarch School for people with neurological differences for the last 16 years. He has worked on adult-transition skills, which, in addition to job training, involve relationship development, independent-living instruction and emotional self-regulation. Dole, now 25, is working two part-time jobs, one at an energy Company, Freudenberg Oil and Gas, and the other at a law firm, Hayes & Wilson.

“The oil and gas company came to Monarch to meet with the staff. I just happen to be sitting at the front desk, and they said they needed an administrative assistant. They asked me to interview. I was very lucky,” he said. “I like my jobs. The hardest thing about working is keeping calm when I feel stressed or angry.” He is still taking classes at Monarch, lives in an apartment with a roommate and hopes to earn his driver’s license soon.

For Ryan Blake, the young man who works a cafeteria job with HISD, his career is just beginning. He and his mom aspire to open a restaurant one day run by people who’ve overcome disabilities and need some on-the-job training.

Editor’s note: And if you're an employer looking to hire, let us know, and we'll get you connected.