Passion for a Park

A family’s love for Evelyn’s Park 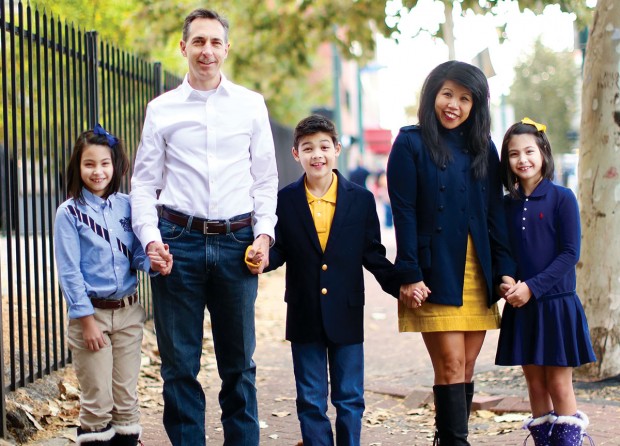 PARK PEOPLE Patricia Ritter, president of the Evelyn’s Park Conservancy, and husband Tom are all smiles with children Ellie, Luke and Kia (from left), who donated part of their allowance toward the park’s development. (Photo: Chubby Foot Photography)

In Patricia Ritter’s house, your word is your bond. You say it, you own it.

So when son Luke, then 6, looked squarely into a news camera four years ago pledging to raise $5,000 for Bellaire’s Evelyn’s Park, well, that was a surprise to mom.

It was a sweet broadcast segment, a child handing over his allowance – a Ziploc bag of  $70.85 – to then-park president Marybeth Flaherty. As cameras rolled, Luke rolled out an ambitious business plan. “I’ll get the money by selling $25 cookies and $5 lemonade,” he enthused.

“I remember thinking, okay, now Luke has to figure out a real way to earn $5,000 because you can’t just say things and not follow through,” says Patricia, the current park president whose family’s connection to the community project was sweetly, indelibly forged in that one teachable moment.

She rolled up her sleeves – Luke’s too – and set about meeting his goal. “I didn’t want to tell him what to do so much as make him think about what he could do,” says Patricia, an admitted Type A personality whose degree in marketing from The University of Texas came in handy. That’s where she met husband Tom, of like mind when it comes to child rearing. “We think it’s important to help our kids think for themselves and do good for the community,” she says.

Luke, of his own volition, suggested that friends and family give money to the park in lieu of his birthday presents that year. So they hosted a party, hired a food truck, and invitees gave donations. Bellaire’s Whole Foods set aside a day for his cookie plan, letting him sell the store’s cookies and lemonade out front on “donate any amount you want” terms.

Between the two events, Luke overreached his goal.

“I was very proud of him,” says Patricia. “It’s an experience he will always remember.”

Fast forward a few years and you’ll find the Ritters are seriously devout Park People. Luke, now 10, and identical twin sisters Kia and Ellie, 8, give 10 percent of their allowance to the park. Patricia, powerhouse behind the project’s marketing, was appointed to the Evelyn’s Park Conservancy board in June 2014. Four months later, she was voted president.

The park, with trails, natural play areas, lawn, café, event center and art, opens on the former Teas Nursery site, Bellaire Boulevard at Newcastle, on Earth Day, April 22. Patricia is almost giddy about the positive impact she thinks it will have on the community.

“I think we forget what a park can do for you. It takes you back to the basics. Our mission theme is ‘Enrich Your Everyday,’ with the core values being family, community and nature. I can’t wait for my kids to use the natural playscape. There are no typical park structures, just cool things from nature that spark the imagination.

“As adults we forget to spend time outdoors. Our society has become such overachievers with no time to breathe. In nature, you reboot. Your brain figures out how to balance, figures out spacial relations. A hike is so refreshing to the mind. Luke and I like to hike and find fun learning things to do along the way, like we’ve hiked and counted prime numbers.”

Yes, Patricia is a bit of a math geek. She was president of Mu Alpha Theta, the math club at Clear Creek High School. Not that she’s always looking to be president. But it’s a trend.

She was instrumental in a successful effort to acquire curbside recycling in Bellaire years ago. Within six months of appointment to the city’s recycling committee, yep, she was president.

“I know how to get things done,” quips Patricia, who sits at her breakfast table, long dark hair topped with a baseball cap, looking like she’s in her 30s. She turns 50 in June.

“I get that all the time,” she laughs. “Don’t have a single gray hair. My dad died at 80 with a head of black hair.” Her youthful exuberance for life and giving back was certainly a learned trait from her Chinese immigrant parents, she says.

Her dad grew up dirt-poor in Shanghai, her mom in Hong Kong. “They had that immigrant mentality to come over here, work hard and live the dream, so to speak. And they always gave to charity and took leadership roles in the community.”

Three sets of acrylic containers on the breakfast room windowsill, receptacles for her children’s’ allowance, tell the tale. They are marked “Spend,” “Save” and “Donate.” The kids happily plop money into the donate jar.

“I want to instill a value in them,” Patricia says, flashing a smile, “that being a part of something is wonderful.”