Curtain Call: One-Act Plays to Bid Farewell to the Class of ’17 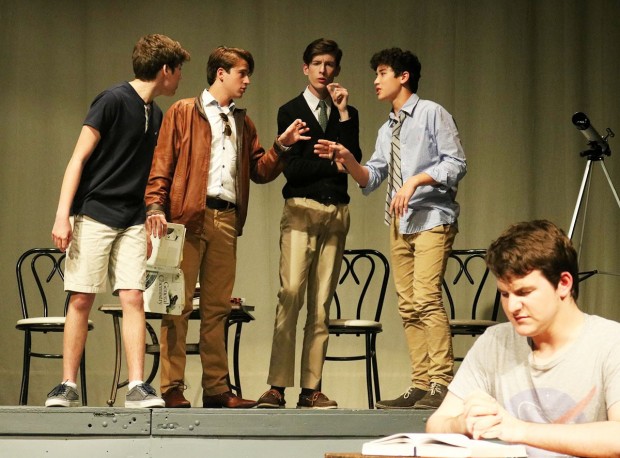 Even if they’re four years coming, goodbyes are never easy. This sentiment rings especially true in the case of tightly-knit communities of tightly-knit friendships, and there’s not a place that better encapsulates such a community than the Strake Jesuit Theater. Every member has his or her distinct place in the program, so each adieu leaves us with a hole that we’ll never quite fill. For such special people, it’s only natural that we bid them farewell off in a special way - each spring, the theater department says goodbye to the year and its graduates with a tear-jerking slideshow and hug-filled awards assembly, but perhaps the best sendoff comes in the form of our annual student-directed one-act plays (SDOAPs).

These productions allow seniors to select any (reasonably appropriate) scripts of their choosing and step into the director’s chair, providing them with a chance to bring their visions to the stage. Each director’s distinct personality shines through in these productions, often leading to shows that take a rather unorthodox approach to things. The silly, lighthearted Maggie Ryan took some liberties with her stage direction that ended up with a sophomore locked in a cabinet, while the more introspective Andrew Johnson spent the bulk of his rehearsal time focusing on emotional connections and vocal intonations. Ethan Lambright, a natural director, showed off his impressive attention to detail by directing a tightly-choreographed, emotionally engaging show, one which sparked debate among the theater regarding the safest way to kick an underclassman on stage. When all was said and done, no bones were broken, so I suppose we can chalk that one up as another success.

SDOAPs, of course, proved more than just another show - as a sendoff to the large and instantly memorable thespian class of 2017, it was a special month of preparation, last-minute bonding, and tearful goodbyes. Nevertheless, theater kids, as we are wont to do, managed to turn even the saddest of processes into a complete blast, as the weeks leading up to opening night were filled to the brim with around-the-clock madness. From late-night Whataburger runs to our daily rendition of the National Anthem, it proved an unforgettable experience for seniors and underclassmen alike

Even with graduation looming over everyone’s head like a pesky rain cloud, the show was a rousing success. Andrew and Ethan’s plays were met with watery eyes and hushed gasps, while Maggie’s farce generated a near-constant stream of laughter. Quiet senior Alex Razim captivated audiences with an emotional, pained, and heartfelt leading performance in “The Other Room,” Andrew’s hand-picked script.

Goodbyes are never easy, but they’re a part of life. Though this year’s seniors once welcomed many of us to the theater with open arms and free food, it’s now up to the sophomores and juniors to accept the torch and continue their legacy. Soon, we’ll be the ones graduating, and before we know it, the theater will have brand new leaders, traditions and inside jokes. Yet, thanks to the beauty of time, the marks we all leave throughout our tenure will never be fully erased. The class of 2017 may be bidding the theater farewell, but their ethos lives on in all of us.