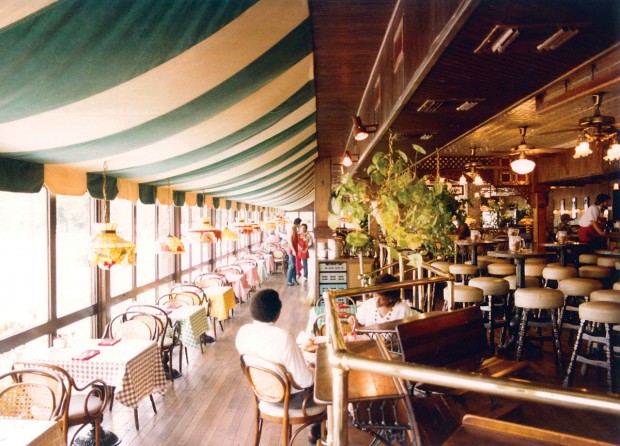 STRAWBERRY PATCH Tiffany lamps, brass accents and a dark-wood bar create a cozy atmosphere at The Strawberry Patch in this photo from the 1970s. (Photo: Pappas Restaurants, Inc.)

Last year, I wrote the second in a series of stories on iconic restaurants from Houston’s dining past. These memories still resonate, sparking conversations and trips down memory lane, from family celebrations at Kaphan’s on South Main to barbecue and fried chicken at The Barbecue Inn on Crosstimbers and Yale Street.

Readers who contacted us after the stories appeared shared favorite dining spots they have enjoyed (and in some cases, continue to enjoy) through the years. And it wasn’t only the restaurants, but the specific dishes and how they were prepared, that hold fast in their memories.

I recently came across a 1980s-era book on menus of Houston restaurants, Houston Epicure – A Menu Guide to the Better Restaurants in Houston by Fran Fauntleroy. The vintage menus included my favorite place to eat a steak when I was young, Bud Bigelow’s on Westheimer near Hillcroft. Greeted by an attentive valet parker as we drove under the rustic porte-cochere, we could smell the charred dishes as soon as we got out of the car. The dark wood interior and small dining rooms were cozy. The “Charcoaled Specialties” section highlighted their steak offerings. I always ordered the extra thick rib eye steak for $11.95. Cooked pink in the center, this juicy entrée was accompanied by a crisp romaine salad topped with homemade salad dressing, my choice being Thousand Island. For dessert, I chose warm fudge pie topped with vanilla ice cream. There was not a better meal in my opinion.

Buzz resident Chuck Zagst wrote in about one of his longtime favorites, Hebert’s Ritz, specializing in steaks, seafood and a popular shrimp remoulade. Run by Clifton and Lula Hebert, “The Ritz” was a large, white, two-story house at McGowen and San Jacinto, in what now is known as Midtown. “Their bone-in rib eye, warmed saltine crackers, and trout almandine were the best,” Chuck wrote.

“When you sat down, they served warmed saltine crackers in a serving dish lined with a cloth white napkin, and butter on the side. The butter was served in individual squares. Trout almandine was also served as a boneless filet in the oven. The almonds were very thin-sliced and were toasted to a dark brown. The fish was also cooked in butter.”

Hebert’s Ritz was around for over 40 years before closing in the mid-1980s.

Local foodie Jay Francis is a longtime fan of Mexican food, and he has a special place in his heart for the puffy and crispy tacos that are made at Fiesta Loma Linda on Telephone Road and also at Los Tios on Beechnut, both of which continue to enjoy loyal followings today. “When I was growing up, these were available at most Houston restaurants. But I fear they will all but be forgotten if these places close.” For vintage nostalgia, his fondest memories are of the cafeteria-style, serving-line lunches he would have on Saturdays at the Felix Mexican Restaurant on Main Street. His family also liked to eat at an El Patio on Telephone Road. While Felix is a memory, El Patio still serves up Mexican Food at its Westheimer location in the Briargrove area.

The Strawberry Patch was one of the most popular restaurants serving traditional American food to hit Houston during the 1970s. Owned by the Pappas family, it was located at 5839 Westheimer Road, where Pappas Steakhouse stands today. The September 1977 issue of Texas Monthly magazine called The Strawberry Patch one of Houston’s first fern bars. The centerpiece was the impressive wooden bar flanked by brass rails, Tiffany lamps, ferns, bromeliads, and other plants. Large floor-to-ceiling windows allowed natural light to flank the interior. Lines were always long, as this popular eatery was jammed noon and night for meals that were all priced under $10. 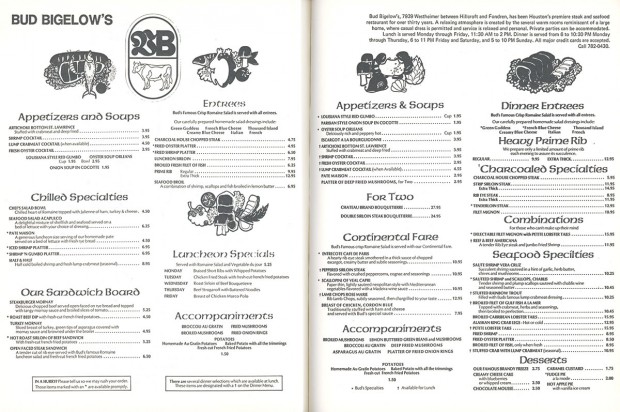 BUD BIGELOW’S STEAKHOUSE This 1980 menu from Bud Bigelow’s, featured in Houston Epicure: A Menu Guide to the Better Restaurants, highlights its steak and chop offerings. The restaurant was especially popular in the ’60s and ’70s.

Buzz reader Randy Jennings wrote, “I miss the Strawberry Patch on Westheimer where Pappas Steakhouse is now. I loved their chicken teriyaki and their large blueberry muffins.” A basket of muffins would be brought out to the table as you sat down. The teriyaki chicken was topped with a pineapple ring and served with fries and a salad. At $6.95, this was one of the most popular dishes, along with burgers served on an English muffin and a bacon-wrapped filet accompanied by a salad served in a flower pot. Drinks came in mason jars.

In 1949, taking over the Greek restaurant Peacock Grille, Maxim’s opened its downtown location at 802 Lamar Street, home of a nondescript parking garage today. The French owner, Camille Bermann, took the name from the famous Maxim’s restaurant in Paris, introducing Houstonians to French food, including lobster thermidor, poached Trout Marguery, and desserts of cherries jubilee and peach melba. When he realized that this was Houston, where meat and potatoes were popular, steak offerings were quickly added to the menu, as were New Orleans Creole-inspired dishes including Creole Gumbo and a signature seafood dish, Red Snapper Excelsior, topped with artichokes, mushrooms and chili powder.

“The original Maxim’s downtown was the only upscale restaurant downtown that was open after 5 and was very popular in the ’70s,” Chadwick said.

In 1981, the next generation of the Berman family relocated Maxim’s to the Richmond location in a newly built facility. With a luxurious pink interior and ornate chandeliers, Maxim’s catered to a new River Oaks crowd, while hoping to maintain loyal customers from the downtown location. Thriving for another 20 years, Maxim’s closing for renovations in 2001 was permanent. Soon afterward, Tony’s made the location its own.

Buzz reader Lindsay Freireich wrote in about one of her favorite fine dining spots, Vargo’s on Fondren Road near Westheimer: “I remember Vargo’s lush garden and settings with elegant silver platters.” Memories of Vargo’s are often different than those we have of other favorites from Houston’s dining past, where we tend to recall our favorite menu items. Here, we reminiscence of lavish grounds with exotic plants, serene lake, and peacocks roaming the property. Dining on the patio was a popular option.

The opulent gardens were a favorite destination for weddings and other milestone events. I fondly recall being asked out for a prom date at Vargo’s in the early 1980s, feeling like a real adult ordering fancy food and a libation. (The legal drinking age at that time was 18.) While I am unable to recall what I ordered that evening, I can visualize the main dining room with large windows overlooking the outdoor paradise. This memory has stayed with me for over 35 years.

Many Houstonians remember the Southern-style, upscale dining experience of The Confederate House at the original Highland Village site where Smith & Wollensky is today. In an elegant setting with antebellum murals and large white columns, and where male diners were required to wear jackets, waiters with napkins draped across their arms served the upper crust of Houston with precision.

The original menu of traditional Southern specialties was created by Texas food legend Helen Corbitt, the New York-born and Texas-proud American chef and cookbook author. Buzz reader Karen Le recalls her favorite meal. “Our meals always began with the Wilhelmina salad – chopped-up iceberg lettuce, avocado, tomato and blue cheese, which was followed by the Confederate Fried Steak. The succulent rib eye was crunchy on the outside and tender inside. Even if we were completely full, we would never leave without their pecan ball for dessert.” Having eaten at The Confederate House myself on many occasions, I can personally vouch for the pecan ball, which I remember as a cold, nut-encrusted, snow globe drizzled with warm bittersweet chocolate.

After a move to the corner of Weslayan and West Alabama, currently home to 2929 Weslayan Apartments, and a name change to State Grille by new owners (members of the Mandola family) in 2001, The Confederate House has, like so many others, quietly moved on.

Editor’s note: Do you have favorite old time-Houston restaurant dishes to share? Or stories about other unforgettable restaurants in the city’s past? We’d love to share your menu memories. Comment below this story or email [email protected].