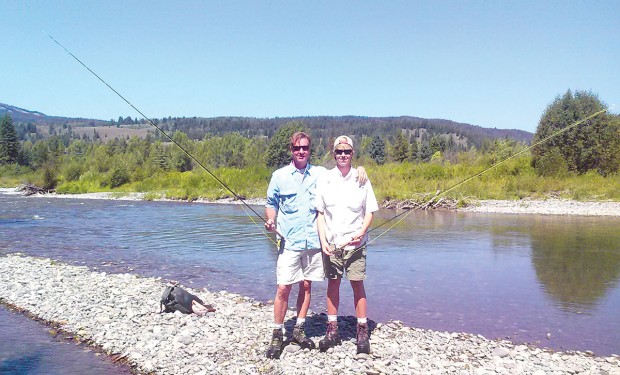 Hans and Henry Groppe enjoy their shared passion for fly fishing on the Snake River near Jackson Hole, Wyoming.

Adolescence is not an easy time to stay close as a family. Schedules are filled to bursting, and relationships can strain as young people seek to individuate. And for many teenage sons, it’s just cooler to hang out with friends than with Dad.

For fathers keen to nurture those bonds and keep communication strong, there’s nothing better than hitting the road together.

The Groppes began their father-son travels on the weekends when Henry, now a junior at Memorial High School, was a little boy. The family would travel to the farm that’s been in the family since 1874, founded by Hans’ great-grandfather, a Texas pioneer who immigrated from Germany when he was 15.

“My grandfather grew up on that farm and so did my father, so I have always had a sense that that’s just what you do when you have a son and you’re a father,” recalls Hans. “You spend time together, and it really doesn’t matter what you’re doing.”

A shared love of nature led the family to Jackson Hole in 1977, and they’ve been going ever since. Their first father-son trip was when Henry was in eighth grade, when Hans taught Henry to fly fish. It became a shared passion.

“The thing about fly fishing is that it’s a real challenge,” said Hans, an oil and gas producer and investment manager. “So that’s what I enjoyed, putting that challenge to him, and he was very eager about it.”

The pair began exploring Wyoming, Montana and Idaho on fly-fishing trips every chance they got. “My personal belief is that there is no substitute for spending time with your son in order to share your values and love with him as your role as a father. And then when you combine that with doing something that’s mentally and physically challenging and surrounded by nature – that’s as good as it gets.”

During Spring Break of Henry’s sophomore year, they were ready for something new.

“After doing those freshwater fishing trips we wanted to pump it up a notch, so we went to the Yucatan,” Henry said. The two of them flew to the island of Cozumel in Mexico and learned to scuba dive.

Henry passed with flying colors, according to Hans, and they dove in the caves and the Palancar Reef. Then they went to the mangrove flats, where Henry quickly caught his first bonefish on a fly rod. Henry had organized the trip himself, as his father proudly tells it.

Hans says he feels fortunate to have a relationship with his son. “We’re thick as thieves,” he said with a laugh. “I admire him so much, and I tell him so.” More seriously, he added, “A 16 year old with his father and it’s just the two of you for a week at that age – I think it says a lot about our relationship.”

Henry advises his friends to travel with their fathers. “I tell them, you should hang out with your dad because once you go off to college you’re going to be gone.” 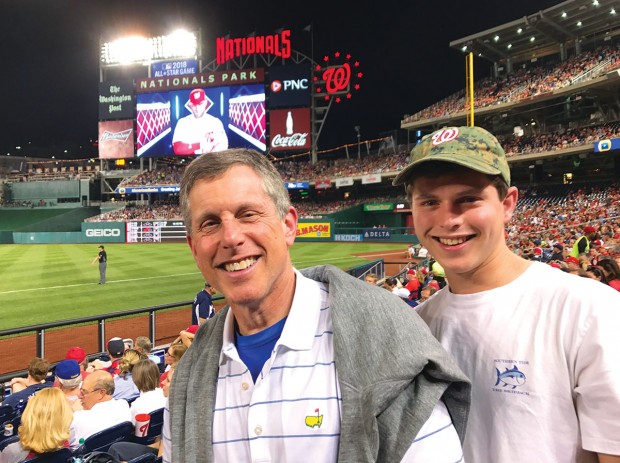 Howie and Sammy Gerber, from left, enjoy the first of an East-Coast series of ball games at Nationals Park in Washington, D.C.

Take me out to the ball game

Three years ago, Howie Gerber, a dermatologist, started a new tradition: father-son trips, beginning with a trip to his alma mater, Duke University, with Sammy, the eldest of his two boys. The occasion: a basketball game.

The two enjoyed their guy time, taking in a lacrosse game and the Duke campus as well.

Next came a trip to San Diego with Jason, now 13, when they went to Legoland, went off-coast fishing and took in a Padres game.

This year, Sammy, 15, now a 10th grader at The Emery/Weiner Schooll, had a weeklong Passover break and Jason did not, as he is in public school. “Teri put Sammy up to asking me to take him on a baseball trip,” Howie said. “He didn’t have to ask me twice.”

They flew into Baltimore that Tuesday, April 11, headed down to DC and went for a tour of the Georgetown area, where Sammy is thinking of studying. Their first game: the Washington Nationals against the St. Louis Cardinals, at Nationals Park.

“The atmosphere was really good, the fans were cool, and the park was really nice,” said Sammy. The Cardinals scored first, but then the Nationals took over. Player Daniel Murphy scored four hits, including a home run.

Wednesday they drove to Philadelphia, where they tried some local flavor with a Philly cheese steak in the historic Reading Market. Soon they made their way to Citizens Bank Park for a match between the Phillies and the New York Mets.

“The Phillies aren’t as good as the Nationals, so there weren’t as many well-known players,” said Sammy. “Also the fans there are not as good… Good fans don’t boo at their team when they’re doing bad. They always support them. They always show that love and passion for the game.”

Thursday morning they took the train station to New York, where they dropped off their things with a friend from Duke at his apartment on the Upper West Side. From there they took the subway and wandered around the city, eventually ending up at Yankee Stadium, where the Yankees beat the Tampa Bay Rays in an exciting 3-2 match.

Friday they took a day off from baseball, touring the Statue of Liberty, the 9/11 Memorial and Little Italy, ending with an off-Broadway show.

But they still had one more game ahead. Saturday they rose early, rented a car and drove up to Boston, where they cheered on the Red Sox along with their famously loyal fans before catching a plane back to Houston.

“It was really great to have almost a week dedicated to going to baseball games, and to be able to share that with my son was pretty fantastic,” said Howie.

Sammy agreed. “It was such a unique and fun trip,” he said. “Looking back on it, it was definitely a life-changing experience in a way. We’ll definitely put that trip in the scrapbooks.” 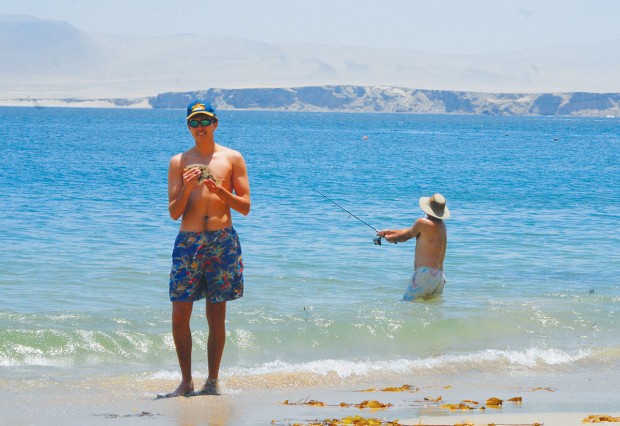 Now-grown Aurelio Benavides, 17, traveled in December to Máncora, where he enjoyed the beach and had a successful fishing trip.

On the Hemingway Trail

Antonio Benavides started going to the remote north coast of his native Peru when he was about 12 with his uncle, staying in Cabo Blanco, a fishing village that became famous in the 1950s. Houston oil magnate and sports fisherman Alfred Glassell, Jr. landed a 1,000-pound black marlin in 1952 and the place soon became a fisherman’s legend and a playground of Hollywood stars and millionaires.

Ernest Hemingway filmed the movie adaptation of his last novel, The Old Man and the Sea, in this spot, and by some accounts he landed a 910-pounder during his time here.

By the time young Antonio arrived on the scene, the massive marlins had been fished out. It was still a wild and beautiful coast with extraordinary sport fishing, however, and he and his uncle went up to the spot, 750 miles north of his family home in Lima, every chance they got.

As luck would have it, his future wife, Alexia, had even deeper roots in the area, with a family mango farm nearby and a cousin with a resort in Máncora, to the north. So the new family began vacationing there, and Antonio’s son Aurelio was 6 weeks old during his first visit.

Aurelio and his sister Arabella spent summers with their grandparents in Peru learning Spanish, and Aurelio visited for a few times as he was growing up. But he longed to go out on the open sea, to go after the big fish that he’d heard about. And last year he finally got to do it.

Last December, 17 years after that long-ago trip, Aurelio and Antonio joined with some guy friends for a father-son fishing trip in Máncora. For Aurelio, now 17 himself, it’s one he will long remember.

These days the rich and famous have found other haunts, but Máncora has grown popular with surfers, backpackers and adventurers. A few nice boutique hotels and an array of top-notch international and seafood restaurants give the town variety. And the fishing, while no longer the phenomenon of the Hemingway days, is still excellent, nourished by the cold waters of the Humboldt Current from the south mixing with the tropical El Niño current from the north. 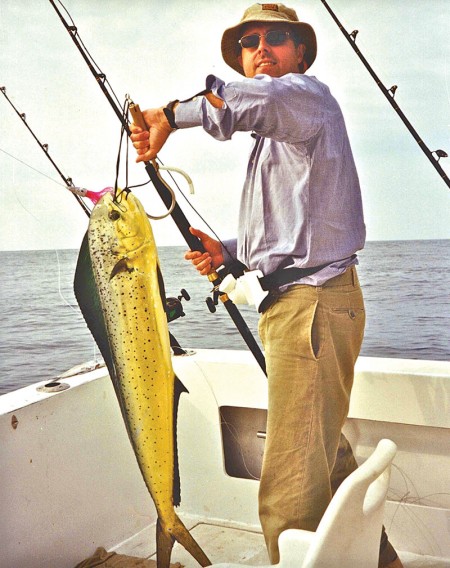 Antonio Benavides hooks a 25-pound mahi-mahi on a trip to Máncora, Peru, 17 years ago, right after his son Aurelio was born.

They fished for two days, floating alongside sea turtles and dolphins, seeing whales in the the distance. The first day they went about 20 miles from the coast, where the captain had word of good fishing. “There was wahoo and they’d seen some marlins swimming out there, but we only caught three yellowfin tuna,” Antonio said.

The next day they headed out nearly 70 miles to an undersea plateau known as the Banco de Máncora. Fishing boats were throwing nets out for the local markets, bringing in 3- to 5-foot squid – impressive creatures in themselves, they also serve as the main attraction for the sailfish, marlin and other big fish that have historically inhabited the region.

They saw the fins of the marlins in the distance, but didn’t catch any; in fact, coming up on 3 p.m., they hadn’t caught anything.

“The captain was turning around; we were already 80 miles out – and then he saw a big school of tuna,” said Aurelio. “In the space of about 2 hours we caught 47 of them.”

They weren’t big, but they were fighters, he said. “They’re only like 5 to 10 pounds, and you’re expecting a huge marlin; after you catch three or four of them, your arms get really tired, because they fight really hard.”

Between the five of them, they hooked about 60, but some got away.

“We saw some guys catching 200- to 300-pound tunas, but those are hard to come by,” said Antonio. “We only caught their children.”

They had no regrets – the smaller ones are better to eat, anyway, said Antonio. They ended up giving three or four to the captain and to his helper, and one to each of the crew. Back at the hotel, they gave one to every worker and still had a whole cooler’s worth of filets to take back to Lima – enough to treat the extended family to a splendid tuna tartar on Christmas Day.

Their travels alone – or with other guys – are important, they say, to do things the girls wouldn’t want to do. Their Peruvian coastal getaway is great for dune buggies, horseback riding, kite surfing and jet skis, as well.

To Aurelio, escaping civilization is part of the charm.

“Actually it’s a lot less stressful,” he said. The women tend to need a lot more time for organizing and packing, he noted. “With guys, you can just get up and go.”

And for Antonio, the challenges are what brings them closer together. In Peru there’s very little infrastructure, and without marinas, even getting into a boat can be challenging at times.

“I enjoy exposing my kids to different things than what we are used to in the States, where everything is spelled out and safe and sanitized to the max… It’s more adventuresome, which means more risks in some ways. It’s not very tourist friendly, and so you bond more with each other.”