Exploring 'Gladiators: Heroes of the Colosseum' 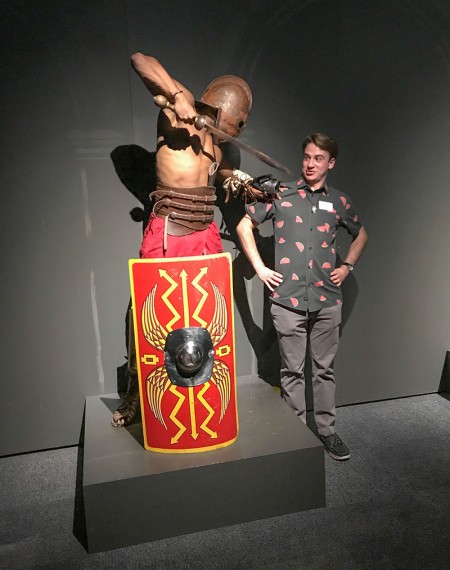 Buzz interns Eli Maierson, Jordan Miller-Mandel and Trevor Schneider went to see the Gladiators exhibit at Houston Museum of Natural Science to test their knowledge of ancient times and see what the hype was all about.

The Gladiator exhibit caught our eyes as soon as we entered the third floor. A man, fully dressed in gladiator gear, stood on a podium completely still. His stillness led us to believe that he was a wax figurine, but he proved us wrong when he held his sword to Buzz summer intern Trevor Schneider’s throat.

The first few rooms of the exhibit focus exclusively on the Colosseum, which, as it turns out, is pretty similar to the old Astrodome. Both stadiums sat about 60,000 people, both sold food inside the building and both sold souvenirs. While a typical Astro game souvenir might be a bobblehead of a player or a hat, souvenirs of gladiator fights included small, metal figurines of fighters and oil lamps in the shape of helmets. 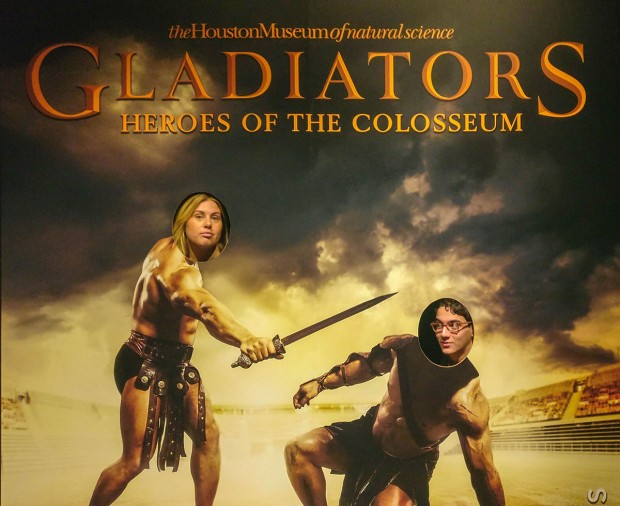 Buzz interns Jordan Miller-Mandel and Eli Maierson putting their gladiator skills to the test. Wonder who the winner is here? (Photo: Trevor Schneider)

Walking through the exhibit and catching bits of information from nearby tour guides, we learned that there are 18 different types of gladiators, with five on display at the museum. Battles did not always feature the same type of gladiator, as certain combinations proved more interesting. One popular battle was the Retiarius against the Secutor. The Retiarius was quick with little armor, and used a trident and a net to ensnare than attack his opponents. The Secutor was heavily armored, but moved slowly and had limited vision. Essentially, it was a battle of agility versus brute strength.

My favorite part of the exhibit were the gaming pieces. Among the ruins of the Colosseum, archaeologists have found dice and sheep’s vertebra, both used to gamble during the battles. I found it fascinating that even ancient people bet on sports, and that two millennia later, not that much has changed. 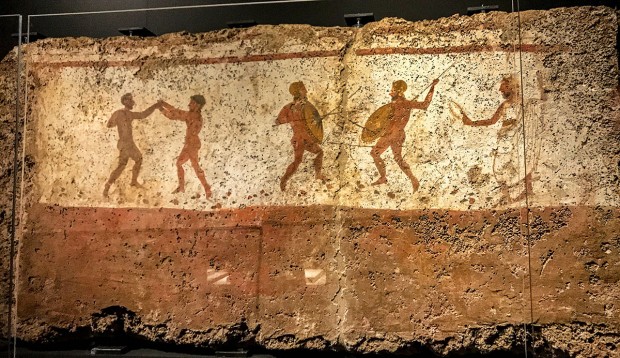 This is one of the first pieces of evidence of gladiator battles. The picture depicts a gladiator battle and the man on the right is offering the crown to the winner. (Photo: Jordan Miller-Mandel)

My favorite part of the exhibit was toward the end of it. There was a virtual reality headset that you could put on and tour the Colosseum, see the gladiators fight, the different styles they used to fight and how tactile they were when they fought. It gave me an appreciation of their lives and how they were almost forced into this lifestyle of fighting. With sounds and great graphics, visitors are transported to Rome in 2nd century A.D.

Driving to Houston Museum of Natural Science on Thursday morning, I didn’t foresee the near-death experience that awaited me. Yet a simple photo-op with a gladiator statue* ended with a sword to my throat and terror in my heart. As it turned out, the man in the gladiator suit was a masterful actor, fooling me into waltzing on over to him without a care in the world. Though his lightning-fast strike scared the bejeezus out of me, it woke me up more effectively than any number of Starbucks lattes - and for that, I am forever thankful.

*or so I thought

Gladiators: Heroes of the Collosseum is open at Houston Museum of Natural Science through Monday, Sept. 4. See more photos from the Gladiators exhibit below, plus a few images from other exhibits currently at HMNS. 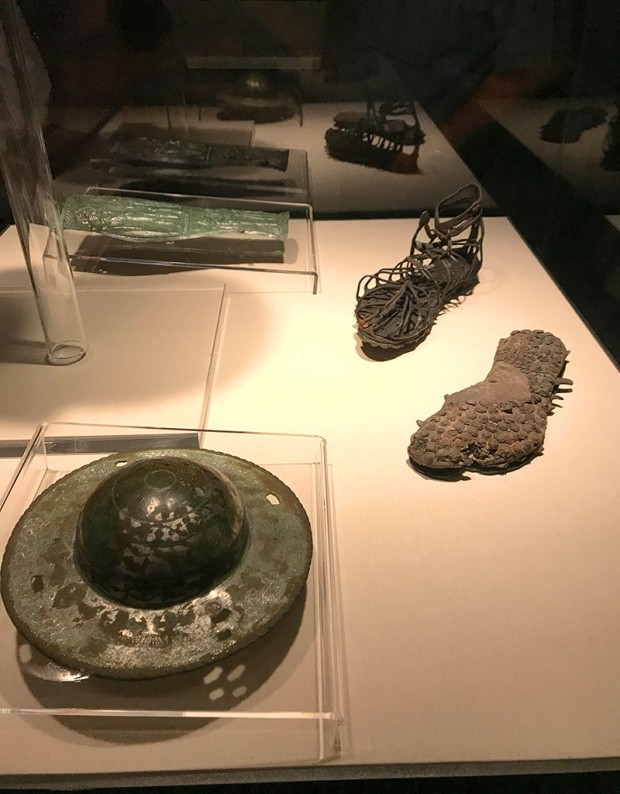 Gladiator equipment, including a greave, which is essentially thigh armor, cleats and part of a shield. (Photo: Jordan Miller-Mandel)

This is one of the first pieces of evidence of gladiator battles. The picture depicts a gladiator battle and the man on the right is offering the crown to the winner. (Photo: Jordan Miller-Mandel) 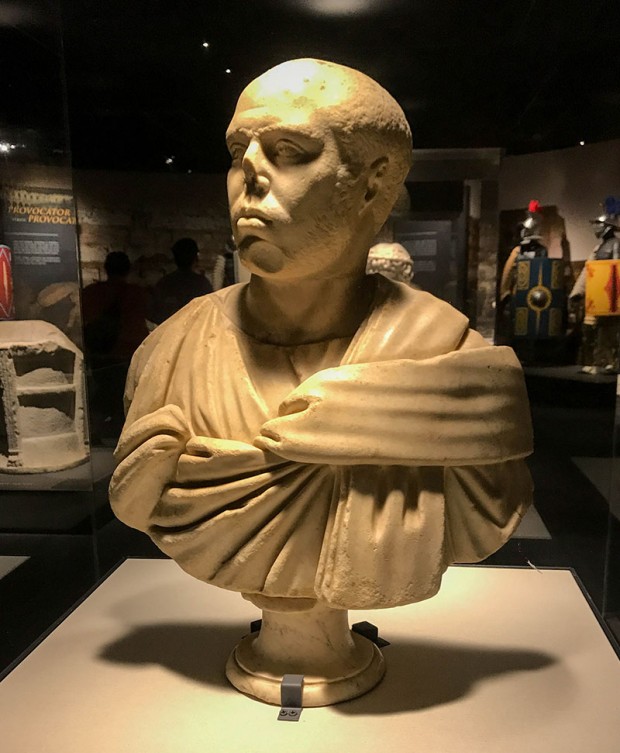 Statue of a wealthy man, one that would sit low to the ground as well as had reserved sitting at the Colosseum. (Photo: Jordan Miller-Mandel) 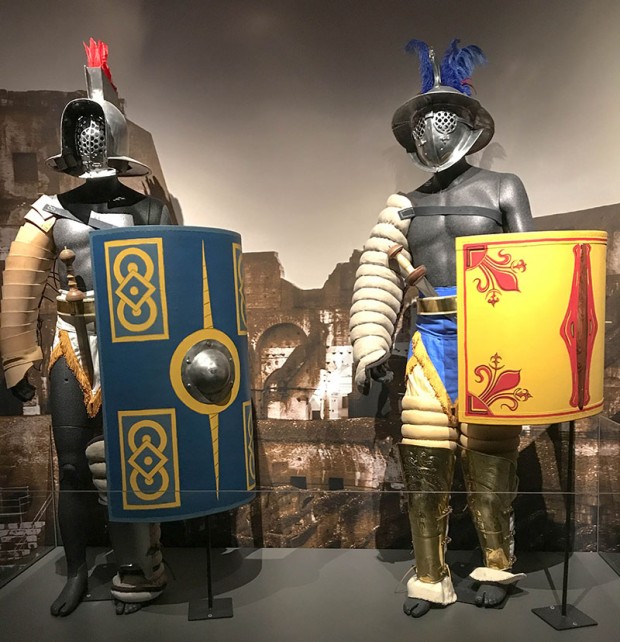 A popular gladiator battle in which one has more armor on and one has a smaller shield making him faster than his opponent. (Photo: Jordan Miller-Mandel) 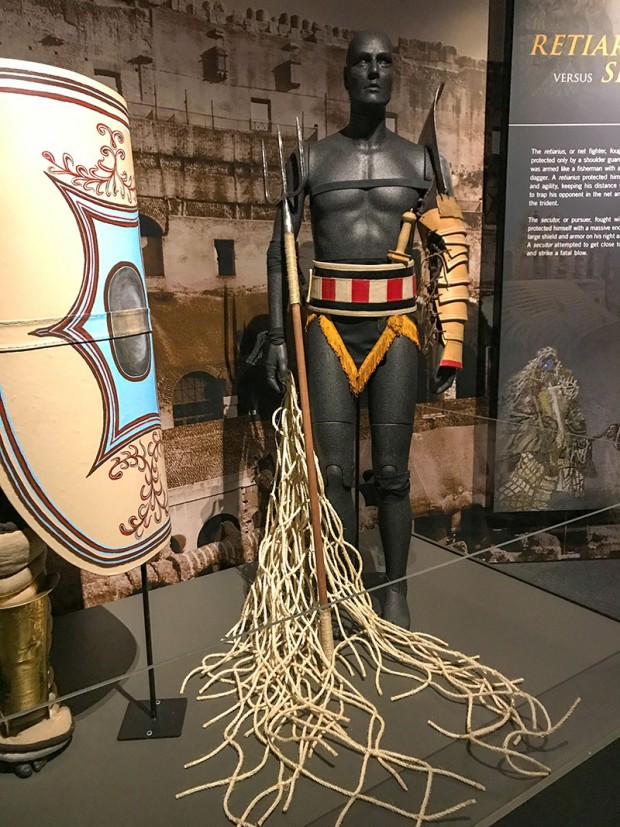 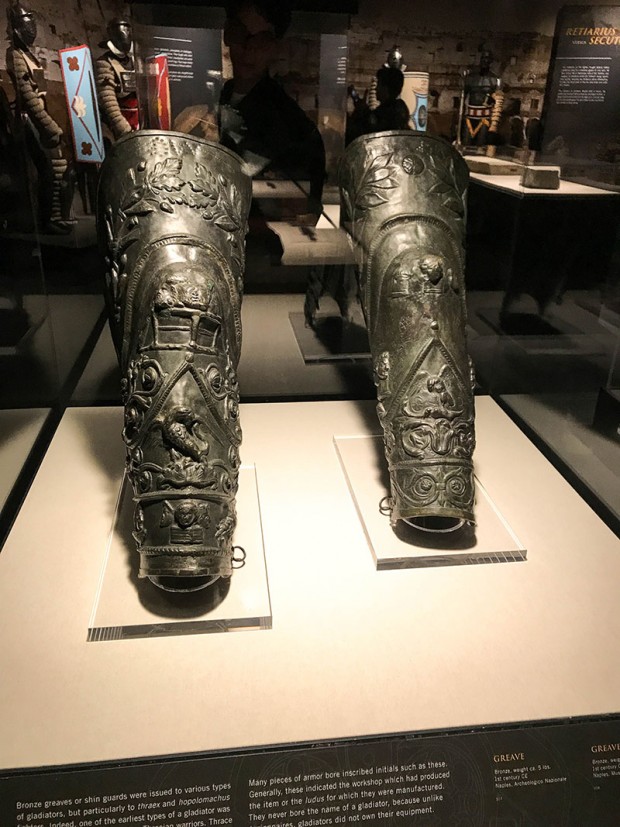 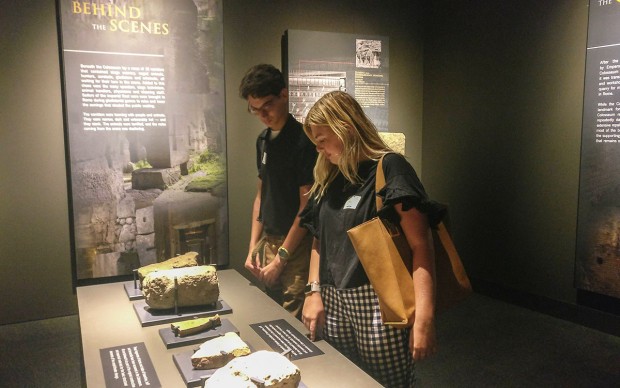 Buzz interns Eli Maierson and Jordan Miller-Mandel looking at the type of rock that was in the Colosseum. (Photo: Trevor Schneider) 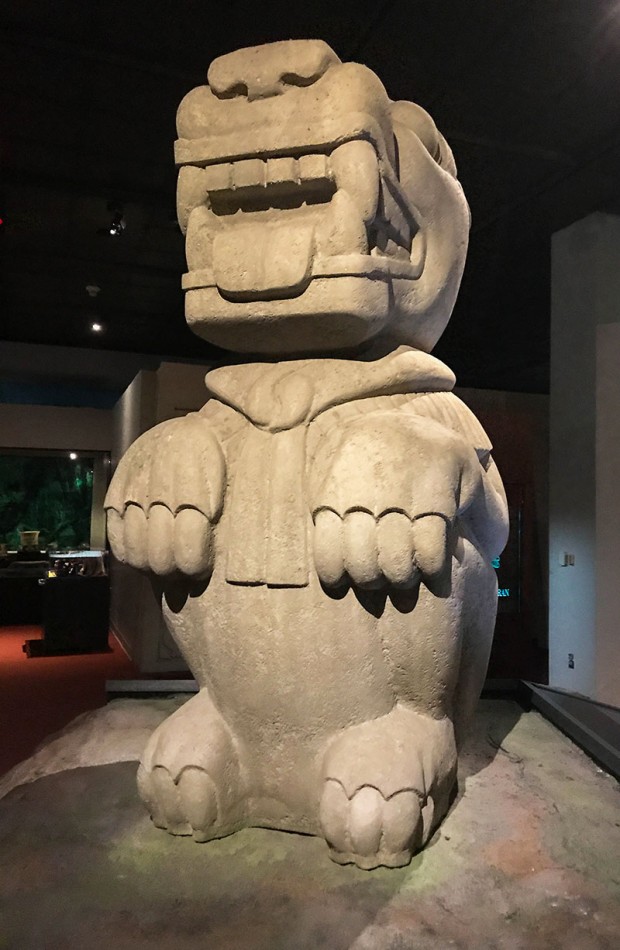 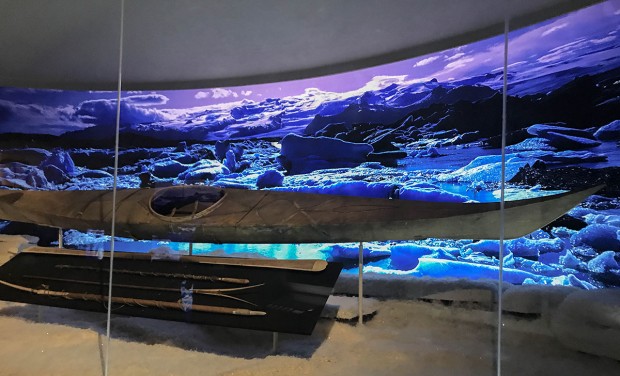 An old-fashioned kayak used by the indigenous people of the Americas, located at the Americas exhibit. (Photo: Jordan Miller-Mandel) 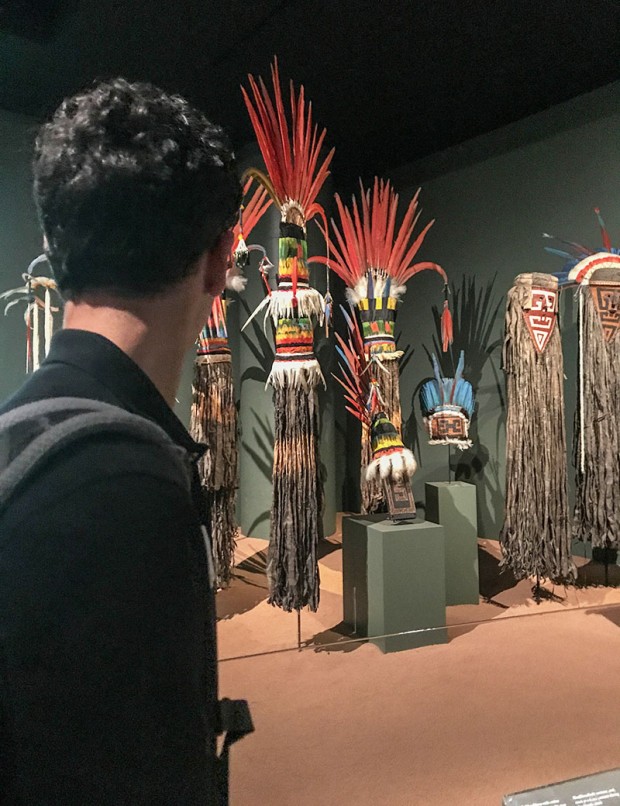 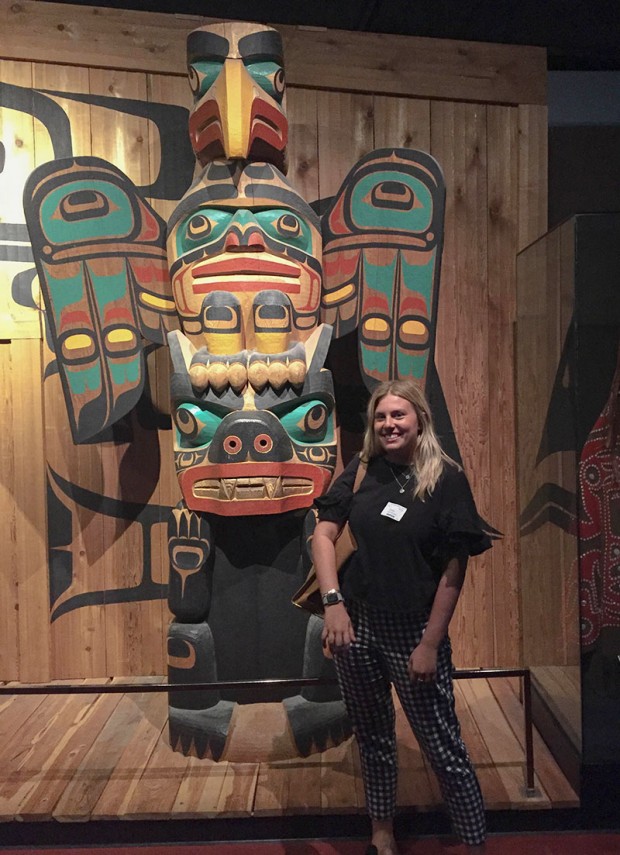 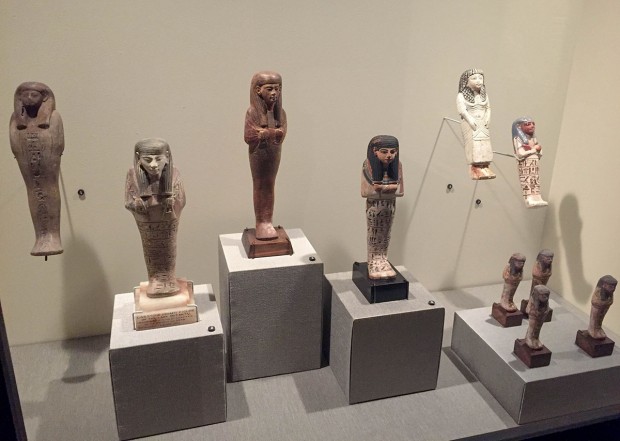 Most people were buried with these figurines of Shabti and in the afterlife they were to grow to the size of people and do your work for you.  These are located in the ancient Egypt exhibit. (Photo: Eli Maierson) 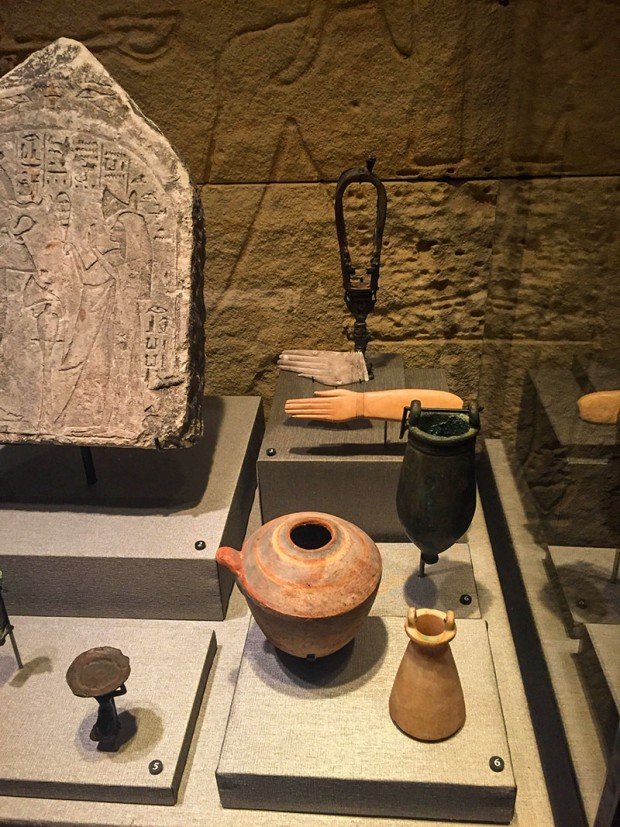 The two hands in the back were used for musical instruments, the tablet to the left displays hieroglyphs. This is located in the ancient Egypt exhibit. (Photo: Eli Maierson)