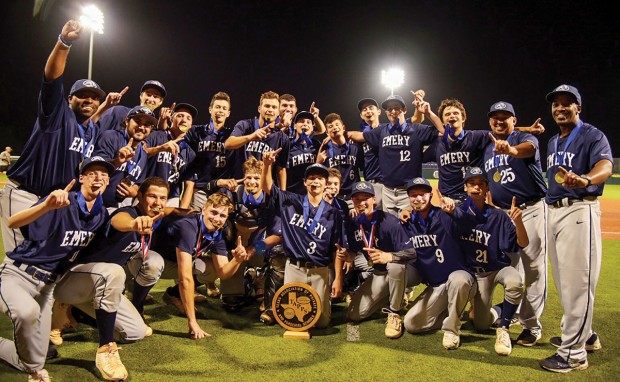 With their dramatic come-from-behind victory in the state final, the Emery/Weiner Jaguars capped off a historic season by winning the TAPPS Division II state baseball championship.

“I’ve never been a part of a more clutch, electric and exciting team in my entire life,” said Jaguars star senior Evan Sack. “We’ve had a core group working together for four years, and we finally did it – we’re state champions.”

The Jaguars earned their first-ever state title with a pair of remarkable victories at the state tournament, beginning with a 3-1 victory over defending state champion Second Baptist. Senior Michael Ran knocked in the eventual winning run with a two-run triple in the eighth inning. Jacob Grzebenski allowed only one run in seven outstanding innings on the mound, while Joe Sondock closed out the victory with a pair of strikeouts to end the game.

“It means the world to win this title,” said Grzebenski. “I’m so happy I was along this journey with my brothers. I’ve never been happier.”

Grzebenski, who will play college baseball at Georgetown, was one of the heroes in the ultimate 6-4 state-championship victory against a Fort Worth Christian team that boasted a 37-5 record. The senior’s two-run single in the Jaguars’ final at bat gave Emery its first lead of the game. Junior Ryan Tiras added three hits and three RBIs in the victory.

“Emery prides itself on community,” said senior Jordan Hudson. “We had over 200 fans that made the trip to Austin for the state final. It really shows how close all of us are both on and off campus.”

For the Emery seniors, the state championship meant postponing their annual senior trip to Israel with the rest of the senior class by about 10 days. They flew out to Israel within 24 hours of winning state to meet up with their classmates. “It was totally worth it. I wouldn’t trade this feeling for the world,” said Sack. 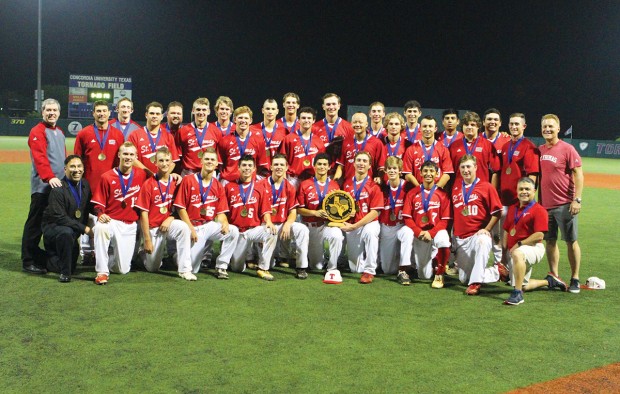 CHAMPS AGAIN The St. Thomas Eagles captured their fourth state championship in the last eight seasons with a 15-1 victory over Beaumont Kelly in the TAPPS Division I State Final. The victory marked the 24th state baseball championship in school history.

For the St. Thomas Eagles baseball team, the tradition continues in the wake of the school’s 24th state baseball championship. The Eagles capped off a magnificent season by routing Beaumont Kelly 15-1 to secure the TAPPS Division 1 state title. “I don’t think there are too many high schools in the country that could say they have 24  state championships, much less four in the last eight years,” said Eagles baseball coach Ryan Lousteau.

In the state semifinals, Eagles pitcher Owen Meaney was sensational with a dozen strikeouts in a one-hit shutout while also driving in the only run of the game in a 1-0 victory over Dallas Parish Episcopal. “It was a really special game for me,” said Meaney. “It means so much to have that accomplishment and help put my team in the state-championship game.”

Then, in the state-title game, senior Logan Bear drove in six runs, with Brandon Campos, Nick Rodriguez, Daniel Perkins, Ross Brock, Nick Phan and Max Winter among those adding to the scoring onslaught. Simen Borland threw a strong five innings for the victory on the mound. “We all played together as a team all season,” said Borland.

“The guys really took this season as a challenge. We won 30 games last year, but we wanted to top that by not only winning more games, but also going a step further in the playoffs and winning a state championship,” said Lousteau. “This class has truly carried on the tradition of St. Thomas baseball.” 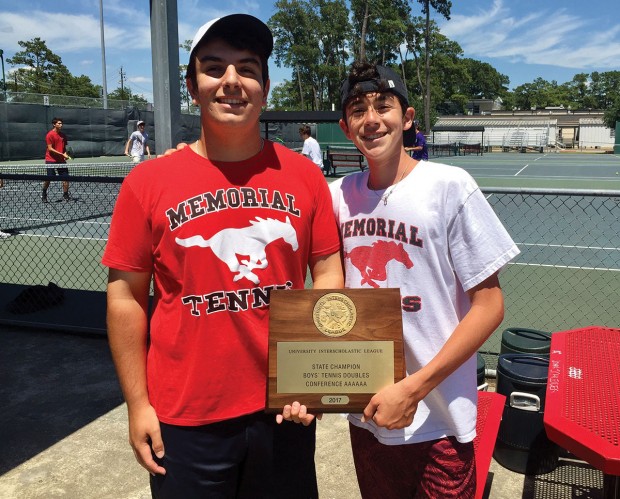 In tennis, the Memorial Mustangs duo of Andrew Esses and Artur Zigman closed out the season in grand fashion by winning the UIL 6A state doubles championship. It was an all-Memorial doubles final, with Esses and Zigman defeating teammates Ben Westwick and Anthony Huynh for the state championship. “It’s truly very rare to have just one school represented in a state-finals match,” said Mustangs tennis coach Budd Booth. “It was an amazing victory for Andrew and Artur and a great showcase for our program.”

“It means so much especially to win it for our school,” said Esses. “We came up just short last semester in Team Tennis, and to win it all with so many people from our school coming out to the match just really meant a lot.” Even after the victory, Zigman said he was still somewhat in shock. “It’s kind of surreal. It feels amazing because we’re going to be in the UIL Texas history books forever.”