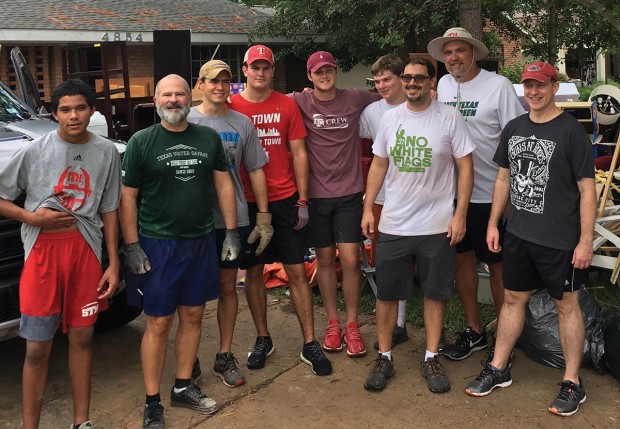 FROM RIVALRY TO PARTNERS The St. Thomas Eagles football team worked their way across Greater Houston to help in Hurricane Harvey relief efforts. St. Thomas joined forces with the Kinkaid Falcons to assist in the massive clean-up.

The games were cancelled, but there was no shortage of off-the-field heroics from local football teams in the wake of Hurricane Harvey. The St. Thomas Eagles and Kinkaid Falcons, instead of playing each other in the season opener, teamed up.

“We tried to make the most out of an extremely difficult situation,” said St. Thomas athletic director Mike Netzel. “Our head coach, Rich McGuire, contacted Kinkaid head coach Nathan Larned about our two teams joining forces in the massive clean-up. We had up to 30 teams of players representing St. Thomas and Kinkaid jointly who went to work across the city. They went to Kingwood, Cypress, Missouri City, Meyerland, Garden Oaks and other hard hit-communities, working feverishly from 7 a.m. to 6 p.m. I think that football took a backseat to real-world events. The kids just said to themselves that we’re going to get out there and help out.”

One of the flooded homes belonged to St. Thomas junior linebacker Seth Deitz, who saw his teammates rally. “My teammates started working on our family home, and then we all went from home to home around the neighborhood to help in the relief work,” said Deitz. “There were so many people in desperate need of assistance in the neighborhood, and the football team was just incredible. It was amazing how everybody was helping everybody.”

The tradition-rich St. Thomas vs. Strake Jesuit game was also cancelled as a result of the hurricane. “We’ve been playing that game for something like 56 years straight, so that was a tough pill to swallow,” said Netzel. “The game was going to be at NRG stadium, and there were so many great events planned around the matchup. I feel especially bad for the seniors, who won’t have that experience of playing at NRG. Still, given the devastation of the last few weeks and where we’re at today, it’s hard to complain too much.” 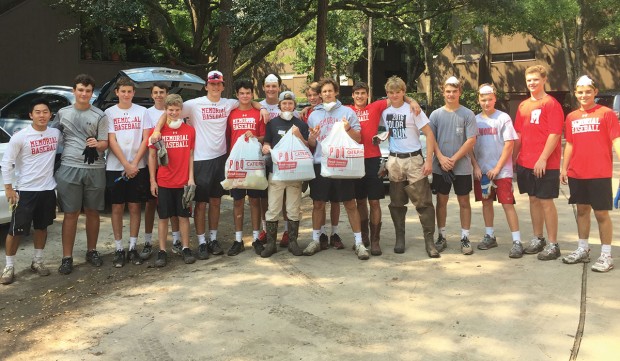 FROM BATS TO BLEACH The Memorial Mustangs baseball team helped as part of a massive clean-up effort in the wake of Hurricane Harvey.

The Memorial area had its share of hurricane-related devastation, but that wasn’t about to stop a large contingent of Memorial Mustangs in the relief efforts. “Our baseball team really came out in huge numbers to help out, as did a lot of our athletes from football, volleyball, lacrosse and several other of our sports,” said Memorial head baseball coach Jeremy York. “It’s really been a school-wide effort.”

Two brothers who play for both the Memorial football and baseball teams were among those whose home was flooded by the storm. “The home was just south of Memorial Drive, so we sent out an email blast for help, and we quickly had Mustangs from several of our sports helping out,” said York. “Just today, we received word of a couple of families in a nearby townhouse complex that were in huge need of help, and our kids responded tremendously. It’s really been a fantastic effort by the entire Mustangs community.” 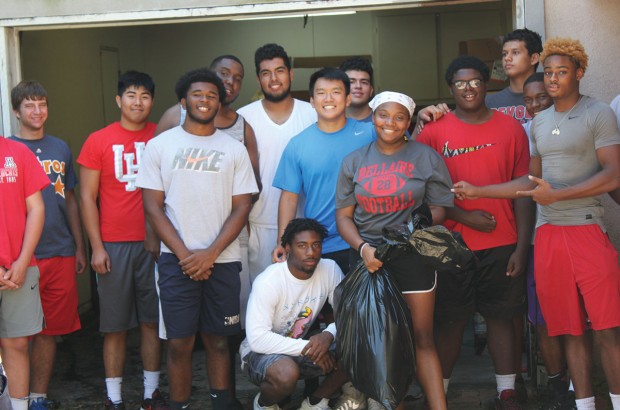 HELPING OUT Despite the devastation that impacted their own community, the Bellaire Cardinals were out in full force to provide much-needed help to area families.

The Bellaire High School community was certainly hit hard by the hurricane, with Cardinals head football coach Herb Kunz estimating about 24 families in the football program alone severely impacted by the storm. “We first had to organize our players to help our own families in the Bellaire and surrounding area. It’s been a huge effort. I’m very proud of how our young men have stepped up and truly displayed the finest qualities in helping people in time of need. I’ve heard story after story about the efforts of these kids.”

Bellaire baseball coach Nick Ozuna also saw his players volunteer across the community under the most difficult of circumstances. “The guys could’ve just been sitting at home, but instead they’re helping out dozens of families in the neighborhood. Our players have been breaking down walls, loading furniture, packing boxes and just doing whatever it takes to come to the aid of their neighbors across Bellaire and Meyerland.

“Our mission is to be great on the field, in the classroom and in the community. To see these players simply take the bull by the horns under tragic situations has been incredibly gratifying. It’s a selfless group of kids. We talk about playing for the name on the front of the jersey and not the back, and this is a prime example.”