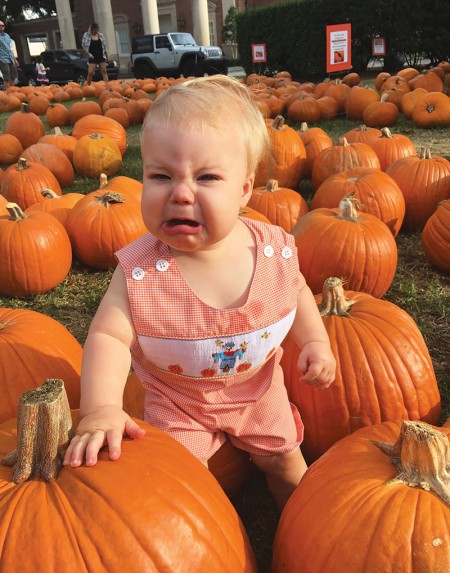 Nolan Wardroup, now 2, didn’t enjoy his first visit to the pumpkin patch. Mom Allison Wardroup said, “I decided that in 10, 15, 20 years to come, we're going to look back on this photo and have a lot more laughs than if I had gotten the perfect smiling picture.”

One of my favorite fall outings is taking our kids, 3-year-old twins, to a pumpkin patch. The past two years, we’ve had a great time.

That wasn’t always the case. When they were babies, my husband and I took them in their smocked pumpkin outfits for a photo at the Nature Discovery Center in Bellaire. The whole thing was, well, a big fail, not because of the pumpkin patch, but because they were, well, tiny babies.

At only 3 months old, they couldn’t sit up yet. They were tired, fussy and very hot. The adorable pumpkin pictures I had always envisioned were a complete joke. I can laugh now, but at the time, I wasn’t laughing.

Allison Wardroup, an early-childhood specialist at Yellowstone Academy, took her son Nolan, now 2, to see the pumpkins and take a picture at St. Luke’s United Methodist Church. Nolan attends school at St. Luke’s, so the drill was easy for the family, who also went to support the patch’s cause. “When you purchase a pumpkin, it raises money for the St. Luke's choir, which my aunt and uncle are a part of,” she said.

The then-new mom (who recently welcomed her second child, Boone) had a perfect day planned. “I packed his little smocked pumpkin outfit – that I spent too much money on – in his backpack. [My plan] was to pick him up from his class, change him and head to the patch for photos. I even scheduled [husband Michael] to arrive in time for the big event.”

Allison, like a lot of new parents, had high expectations. “You want to document every little thing to perfection,” she said.

On the day of the photos, Nolan had other plans. “He was tired, cranky and just not having it from the moment he saw his first pumpkin. He did not get the memo that I needed an adorable photo for the baby book and social media,” Allison said, laughing. “No amount of singing, clapping or snack-bribing could've forced a smile. But it’s all about the memories, no matter what they are. Motherhood has taught me that hardly anything ever goes according to plan, and smocked outfits do not equal perfect pictures.” 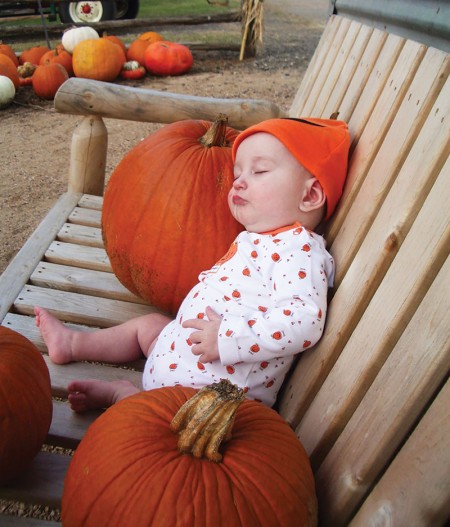 Mason Arnold, now 9, fell asleep during his photo session as a baby at the St. Luke’s Methodist Pumpkin Patch.

Amanda Arnold, a communications manager at The Parish School, and her husband Eric Arnold, an instructional lab manager at The University of Houston, have a 9-year-old son, Mason. He fell asleep during his first pumpkin-patch photo session long ago.

The Arnolds love the St. Luke’s pumpkin patch, though. “They have such a huge variety of size and types of pumpkins,” said Amanda. “They leave wagons, hay and stools out in the patch for photos, and the volunteers working are so sweet and helpful. Their wagons are also so helpful in bringing pumpkin purchases to your car.”

They would take Mason every year until he was about 5 to the pumpkin patch in his Halloween costume. “The first year, we dressed him in a pumpkin costume, and he cried the entire time” and fell asleep, she said, laughing. “As a 2 year old, he dressed as a giraffe, and it was so cute.”

As the kids get older, into toddlerhood and beyond, it’s fun to road trip to pumpkin patches that offer family activities beyond photo opps, like Blessington Farms in Simonton and Dewberry Farm in Brookshire.

My favorite so far is Blessington Farms, about 20 miles from Katy, which opened for the fall on Sept. 23 this year. It is not only a huge pumpkin patch, but there are games and activities so the kids can go nuts. They can dig up bones in the fossil dig, take a ride in an old-fashioned tractor hay ride and get lost in a corn maze. It’s fun to take home a huge pumpkin to carve, too.

“After teaching preschool for 6 years, I've been to my fair share of pumpkin patches,” said Allison. “My favorite pumpkin-patch experience, so far, is at the Houston Oil Ranch in Hockley. [Visitors] can do everything from milking a cow to playing mini golf. My personal favorite is Tike's Town, for toddlers.”

Good luck to all of those parents striving to get that perfect pumpkin-patch photo this fall. But don’t be disappointed no matter what happens. You’ll look back on it and laugh.