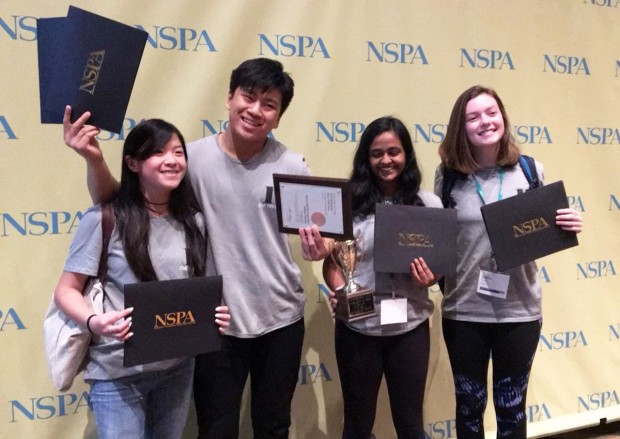 As we entered the Hyatt Regency in downtown Dallas, we were overwhelmed by the enormous crowd. Thousands of writers, photographers and designers milled about in a lofty exhibition hall, admiring the newspapers and yearbooks on display.

We, along with the other editors of the Review (our school’s publication), were in Dallas for the National Scholastic Press Association convention. On Nov. 16, we left school after first period and embarked on a 5-hour journey to the Hyatt Regency, where the convention was held.

During our time at NSPA, we attended various conferences led by esteemed journalists and other media personalities. We learned how to hone our craft and become better writers, editors and leaders. We were also given a chance to evaluate the work of our peers from around the nation.

“Seeing their [other schools’ publications] designs and interacting with them made me feel competitive and also helped me to appreciate the effort put into journalism,” junior designer, photographer and writer Stephen Kim said.

Speakers at the convention rarely shied away from contentious subjects, such as racism, sexual assault and religion.

“I was impressed at how thoroughly they discussed controversial topics,” junior assignments editor Sophie Caldwell said. “They emphasized techniques for writing about difficult topics with compassion and accuracy.”

On Saturday, we concluded the convention with the NSPA award ceremony. Members of the NSPA board honored print and online newspapers for their excellence in categories such as writing and design. For the 2016-2017 cycle, the Review won first place for Aileen Zhang’s comic strip, third place for Multimedia Sports Story and received an honorable mention for Page One Design and Multimedia News.

The committee then announced the winners of NSPA’s Best of Show. For the Small School Website category, our online publication won seventh. For the Special Edition award, we won first place for our issue on Hurricane Harvey, marking the first time the Review has ever placed in the Special Edition category.

“The Harvey issue was the most meaningful issue I’ve ever helped produce on the Review,” senior editor Claire Furse said. “There were so many important stories to tell, from St. John’s community members who experienced devastating loss during the storm to those who spent countless hours volunteering or rescuing others. Everyone on the Review worked hard to represent the school community accurately and respectfully in the aftermath of the storm, so we were all incredibly grateful to receive first place recognition for the issue.”