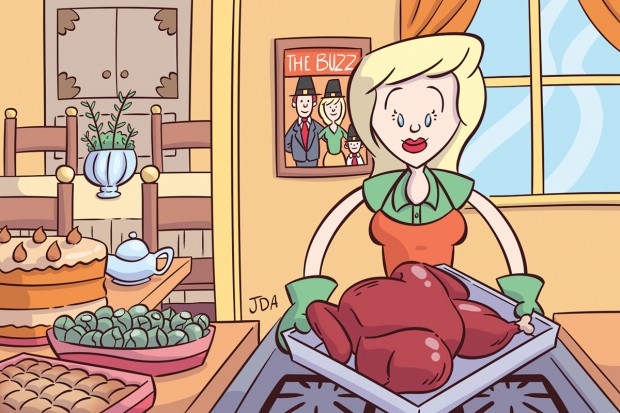 NEWFANGLED There are lots of ways to update traditional Thanksgiving fare, including spatchcocking the turkey – if the family agrees to it. (Illustration: behance.net/runamokstudios)

Thanksgiving, more than any holiday, is all about tradition. Not just in terms of what we do, where we go and whom we spend the day with, but right down to what we eat. I can’t remember a Thanksgiving without a green bean casserole.

But after years of the same casserole (canned mushroom soup, anyone?), some of us have made a few tweaks to our Thanksgiving menu. Whether that’s fried shallots, béchamel and haricot verts replacing the canned green beans and French’s Fried Onions, or whether it’s an entirely untraditional take on pumpkin pie, a little change can mean a big shakeup at the family table. Here, a few neighbors share Thanksgiving updates that actually worked – and stuck.

The star of the Thanksgiving table gets an altogether new treatment from the traditional at the McLaren house. Tevia McLaren says her mother-in-law found a recipe for spatchcocking via Martha Stewart. “We thought we were so cool doing it,” Tevia says. “And then I found a reference to [spatchcocking] from pioneer days!”

When asked if Tevia’s family shares their turkey recipe, Tevia says, “Of course we do! But other than the how-to-spatchcock, it won’t help. My father-in-law does the spatchcocking, and my mother-in-law does the seasoning. But every, every recipe she’s ever given me is accompanied by her disclaimer: ‘But I didn’t have this, so I used that.’ Or, ‘Sometimes I…’ Or, ‘Just put on it what you like.’ Argh! The spatchcocking is the easy part.” Google marthastewart.com, how to spatchcock a turkey, for the same step-by-step instructions that the McLarens use.

Amp up the sweet potatoes

Ophthalmologist and gourmet cook Allan Fradkin has devised a sweet potato recipe that brings the old mushy, marshmallow-y one into the 21st century. “I have changed the recipe through the years,” he says. “I started putting streusel on top and liked that, and then I added Grand Marnier. Some people think it’s too much of a to-do. It involves more work than just your basic sweet potatoes. You have to sauté the apples, make the streusel. But it’s worth it.”

Introduce a new side

Leslie Wade, a part-time art teacher and one of the masterminds behind the acclaimed Junior League cookbook Peace Meals, says, “The Brussels Sprouts with Prosciutto is now one of my Thanksgiving family classics, and my kids ask for it every year. My mom used to make Brussels sprouts for years that hardly anyone ate. Now with the Peace Meals recipe, the Brussels sprouts are gobbled up. It’s the one dish that I never have to bag up any leftovers from.”

Katherine Kardesch, a mom of three charged with making all the Thanksgiving desserts for her family, preps Pumpkin Cheesecake, Apple Pie, Chocolate Pecan Pie and Pumpkin Pie, but calls Pumpkin Pie Cake the real crowd pleaser. “We love this recipe,” she says. “It was from a realtor in a neighborhood mailing. I read it close to Thanksgiving about 20 years ago, made it, and brought it to Dallas where it became a family favorite and a staple for Thanksgiving.”

Or just stick with the same

Some of us really love those French’s Fried Onions. I’ve tried frying shallots to top an updated green bean casserole, only to be scolded by my father, Bernie Milstein, who then showed up at my house carrying his own can of French’s. “Sorry to be a stick in the mud, but what is wrong with your grandmother’s string bean casserole once a year?” he says. “Same thing with the cornbread dressing. We’re just talking about once a year.” Guess I’ll be stocking up on French’s.