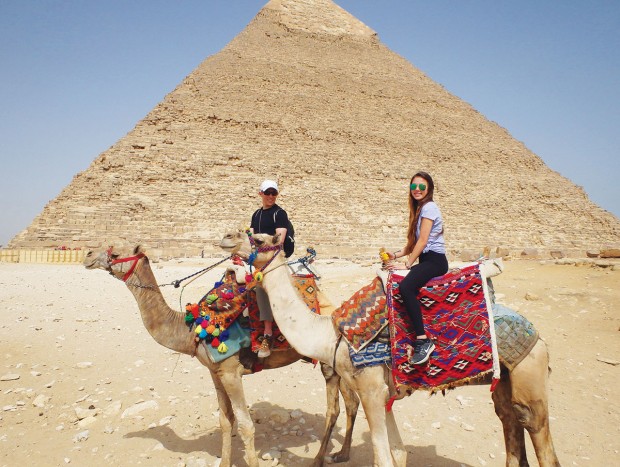 THE PYRAMID CHALLENGE  Traverse and enter all the major pyramids by hoofed animal. Options were camel, donkey, horse or goat-drawn carriage. The Yings found camels.

As a private investor and businessman, Alan Ying is no stranger to travel. But in April of 2017, with then-14-year-old daughter Sydney, he set off for the strangest journey of his life.

The two signed up for the Global Scavenger Hunt, a 25-day, round-the-world trip and competition that had them riding a water buffalo in rural Vietnam, sampling strange fruits in Macau and counting the number of Buddhas in a temple in Thailand, just to name a few of the challenges.

And while they were up against formidable teams from around the world – most adults – it was the Yings who walked away with the championship title, the 2017 World’s Greatest Travelers.

“A Blind Date with the World,” the competition is billed, and the description is an apt one. There’s no way to prepare; contestants are told to show up at a certain hotel in a certain city at a certain time, and there they are given a booklet listing a variety of challenges to choose from. Internet usage is prohibited: No Google, no TripAdvisor – and you can’t hire a tour guide, either. The idea is to learn from locals, immersing yourself in the culture and navigating the old-fashioned way, with maps and directions from people.

Challenges range from the whimsical – finding a foul-smelling durian fruit, for example, and eating it – to the arduous, such as climbing to the peak of Sri Lanka’s Mt. Adams before dawn.

Each challenge is assigned a number of points, depending on difficulty. The contestants travel through 12 countries on four continents, solving riddles and documenting their journeys. And the pair that end up with the highest score – in this case, the Yings – are the winners.

“It was pretty fantastic; you don’t know anything – where you’re going, the time zones, the climate, anything – and really, your only preparation is to pack as lightly as possible,” said Alan. “You’re not going to have porters moving your footlockers to and fro, so the more you bring, the more you have to carry.”

Sydney, then a freshman at Post Oak High School, approached her teachers six months in advance, worked ahead on her studies, and delivered a daily blog and a presentation afterwards. As a Montessori school, Post Oak incorporates real-world experiences into the curriculum, so the 25-day absence was not a problem.

Here’s a peek at their exotic itinerary, from an interview and Sydney’s blog.

Day 1: San Francisco. Sydney: “I’m nervous, excited, tired and more nervous… I’ve been told that everyone cries at least once on the trip, so I feel a little bit better.” Alan: “‘Get comfortable being uncomfortable.’ That was the point of the trip when I first mentioned it to Sydney… Well, it’s here, and it’s already uncomfortable in that good, excited way.”

Sydney’s biggest worries: getting lost, not having fun, getting sick or injured, or perhaps worst of all, “losing terribly... Because this is a game, and we all want to win.”

First was orientation, then meeting their fellow travelers – “…like fantastically interesting characters in a book,” according to Alan, including a septuagenarian couple from New Orleans, a thrill-seeking couple from New Zealand, an American expat and Chinese national from Shanghai, and a meteorologist and food blogger who had never met until that day but were on a team together.

Day 3: Hong Kong lowlight: Spending the night in the ferry station on the way to Macau. They realized Macau is a different country and they’d need their passports – which were back at the hotel. They arrived at the station just after the last ticket had sold.

Alan’s take, from Sydney’s blog: “The best part of yesterday was that now and forever after, I as a parent can look Sydney in the eye and say, “Look, I know you think [X] is horrible and the end of the world, but you’ve been forced to sleep in a ferry station at night in Macau... you can handle anything.”

Day 5: Hanoi, Vietnam. Finding and riding a water buffalo, without speaking the language – at night, was unforgettable. Beyond the edges of the city, in the middle of the night, a huge herd of very pointy-horned water buffalo crossed the road. The cab driver was able to persuade the herder to let Sydney climb aboard the beast, and a fuzzy photo documents their triumph.

Day 7: On a seven-hour layover in Bangkok, they jumped a train and tuk tuks (moped taxis) to downtown, took a ferry, photographed an elephant, ate Tom Yum Gai soup outdoors in 105-degree heat with 90-degree humidity – and made it back to the airport in time for their flight.

Days 8-11: Sri Lanka – “Like a scene from an Indiana Jones movie,” Alan described it – an open-air train stacked with people and babies and animals that carried them six hours into the sweaty heartland of this island nation, where they videotaped a malaria public-service announcement with a local family, hiked a mountain to a temple at sunrise, and visited the sacred bo tree descended from the one the Buddha sat under when he reached enlightenment. Sydney learned to drive a tuk tuk. The biggest challenge: awaking at 1:30 a.m. to climb above the clouds to the summit of Adam’s Peak in time for an unforgettable sunrise.

Days 12-14: Cairo, the first of a 3-day leg in Egypt. Highlights: a cruise on the Nile; Alexandria, home of one of the world’s most ancient libraries; Coptic Town, the world’s largest ancient shopping center; and the Pyramids of Giza. 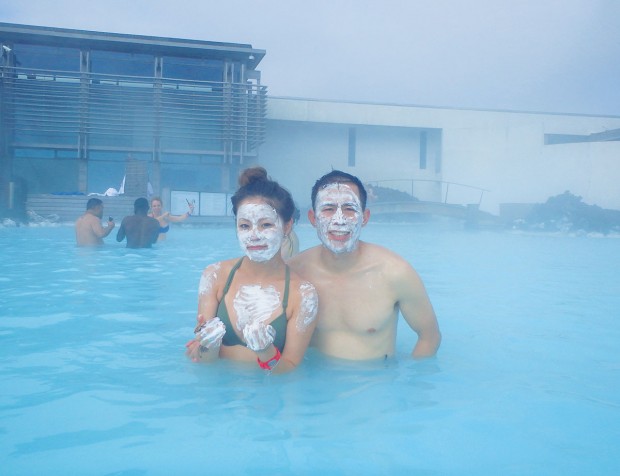 THE SPA CHALLENGE Partake in all the healing properties of Iceland's Blue Lagoon geothermal spa. The spa is located in a lava field in Grindavík on the Reykjanes Peninsula, southwestern Iceland. It's several square kilometers in size, is always at 100 degrees Fahrenheit, and is of uniform depth throughout.  "It was definitely a highlight," Alan Ying reported.

One particularly memorable scavenge involved getting a dinner invitation from a local family – and becoming local celebrities in the process. Their new friend, Mohamed, took them to a remote village beyond the military border, where foreigners were not allowed. Most residents had apparently never seen a Westerner before. Children formed an entourage, shouting their two English phrases: “I love you!” and “Hello!” as they made their way to Mohamed’s home.

Dinner was camel meat, buffalo cheese, bread and veggies in a house shared with goats, sheep and cows, where the most successful communication was laughter and everyone sat on the floor. After, they visited with a dozen families. Everyone wanted photos with the Yings; some handed over their babies so they could take pictures of them with their little stick phones, and others played downloaded songs from Adele and Taylor Swift so they could sing along.

“They gave us gifts we had to take with us,” Alan recalled. “They were extremely poor but very welcoming, giving us whatever they could afford.”

Africa gave, but it also took away. Halfway through their trip, on their way to Cairo, Alan’s comfy flight on the United Arab Emirates airline included a handy pouch to place one’s cell phone – which is where his new iPhone 6 stayed when he stepped off on a layover in Abu Dhabi.

They tried to look on the bright side. “It gave us an opportunity to detox from everything in the world that’s technology,” said Sydney.  Alan had already come to appreciate the rules that kept them from checking the web for information. They landed in Thailand with “no phone, no Internet, nothing – and we found our way to a very particular place within 30 minutes just looking at maps and subway maps and talking to people… It’s just a very empowering feeling to know you can land anywhere in the world and not know the language and get to a place where you need to go without any support whatsoever.”

This was just the halfway point, however; the trip would still take them to Europe – Belgium, the Netherlands, England, Ireland – and on to Iceland, where they swam in the amazing Blue Lagoon, an enormous natural geothermal spa located on a lava bed and ate, in Sydney’s words, the “MOST AMAZING HOT DOGS IN THE ENTIRE WORLD.”

The trip taught them many things, but two lessons rise above. First, people are kind and want to help, everywhere. Second, Sydney and her dad can do just about anything together when they put their minds to it.

“We learned that we can show up in a country and not know anything… and that we have the capability and that we are bonded enough to where we can solve anything together,” said Sydney.

The trip changed her in many ways, she said, helping her learn to prioritize what is really important in life.

“At first I was the most hyper teenager you could be; I wasn’t going to have my phone, I’d be away from friends, I’d be stuck with Dad for a month; I’d get really dirty and meet a lot of strangers.” But with every day that went by, she learned to relax and observe what was around her; to see how other cultures respond to the stresses of poverty and daily life.

“If you are worried about growing up in the real world, this is the No. 1 way to get great exposure to what that’s going to be like,” she said. “The U.S. is so developed; we tend to think we have so much more than other cultures. To see those other cultures in the real world, you learn so much, and you’ll never get that experience in any other way.”