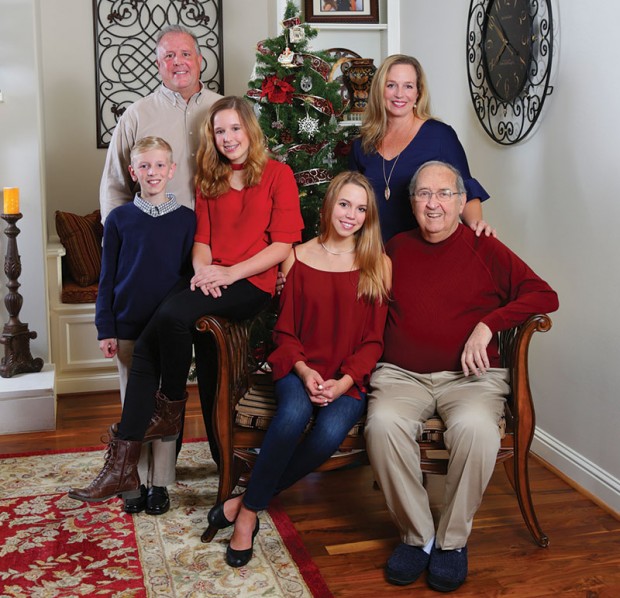 The photo shoot [for An Ornamental Journey: More than just tree decorations, by Jennifer Oakley, December 2017] with my family, including my father, was done on Nov. 1. One week later, on Nov. 8, my father was admitted to the hospital and has undergone some life-threatening heart issues. He’s still hospitalized [at press time for the January issue] but is making progress. For my friends that are closest to me and have walked this journey with me and know what’s going on with my father, when they read the story once it was published, they mentioned how poignant that this article was about tradition and family and the relationships that my kids in particular had and have with their grandparents, for that to be called out in a time that was very scary and dark for us with my dad’s health. He proudly displays the magazine in his hospital room; it’s been very uplifting for him to have this come through in the time that it did. It was so timely and has reinforced for me all the same things I said when the interview was conducted – the importance of family. You don’t know how much time you have, and you’ve got to make the most of what you’ve got.

A friend of a friend reached out to me and says she bakes those cinnamon rolls every year [the recipe featured in The Holidays After Harvey: But what about the cinnamon rolls? by Deborah Lynn Blumberg, December 2017]. She said she would love to bake them for me this year and bring them over so we can have them and warm them up for Christmas. I told her that was so sweet; I am overwhelmed by how many people have offered to open their kitchens to me. Also, one of my students’ parents offered their kitchen to us to bake Christmas cookies, so now we’re going to make Christmas cookies there one weekend. It’s been a wonderful, heartwarming feeling. The devastation from Harvey has really brought the community together. Through all the rough days, it’s incredible to see how people are willing to help in so many ways.

Editor’s Note: We were touched to receive a call to the office from a Buzz resident offering her kitchen up to Missy, plus inquiries from other readers about where she ultimately made her traditional cinnamon rolls. We are happy to hear how many offered their homes to the McClure family.

Yes, it really was that latke recipe

Thank you to The Buzz for sharing my family’s latke recipe [Back Porch: A latke primer, by Andria Frankfort, December 2017]. I was amazed to find out how many people read your magazines! I was just at a Christmas party, and so many people came up to me and told me they loved the article and video demonstrating my recipe. They asked me if it was the same recipe used at Kenny and Ziggy’s. And I said, of course it is. It has been the same one that has been in my family for generations. Of course, Ziggy makes much bigger portions at the restaurant. Thank you!

Editor’s note: Thanks, Alan, for sharing the story of your 25-day, round-the-world trip and competition with your then-14-year-old daughter Sydney. And congratulations on winning the championship title of the 2017 World’s Greatest Travelers.