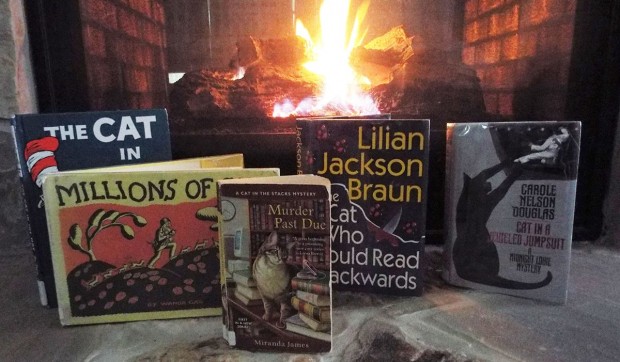 The recent Book Buzz article on “Man’s Best Friend”  by Linda Stevens prompted me to prepare a purr-fect response to acknowledge our feline friends appearance in books.

Growing up, our family had a yellow tabby named Dopey along with a terrier named Bitty. As children, we also had the expected childhood pets of hamsters and turtles to add to the experience of pet ownership. Dogs were our usual pets of choice after Dopey finished his last nine lives, but as an adult I adopted a cat, Peaches, and was then adopted by a cat, Cotton. Cat people know what I am talking about. Stella, a miniature dachshund, is our four-footed companion and ruler of the roost these days - and she doesn’t like cats. But I still like cats, especially when they are in books.

As a younger reader and owner of a cat, one of the first introductions I had to stories with cats was the now-classic The Cat in the Hat by Dr. Seuss. Published in 1957, it was a response to a literacy debate of the time and continues to be a bestseller. Today, characters such as Pete the Cat by Eric Litwin charm young readers as does Skippyjon Jones by Judith Byron Schachner.

In 1928 the classic tale Millions of Cats by Wanda Gág, was published about a man and a woman’s decision to get a cat and T. S Eliot’s cat poems in Old Possum’s Book of Practical Cats have delighted cat lovers since 1939 later inspiring a well-known musical adaptation you may have tried to get tickets to called Cats.

Adults also have a choice of some light-hearted cat characters in cozy mysteries. Koko, a Siamese later joined in the series by Yum Yum, solves mysteries with Jim Qwilleran, a reporter, in The Cat Who series by Lilian Jackson Braun. Midnight Louie is stalking and solving murders in Las Vegas in the series of the same name by Carole Nelson Douglas. Or try the Cat in the Stacks mysteries penned by Miranda James that take place in Mississippi and features a kind librarian and his Maine coon cat named Diesel.

Whatever your choice in four-legged companions, grab a book and relax with your furry friend.