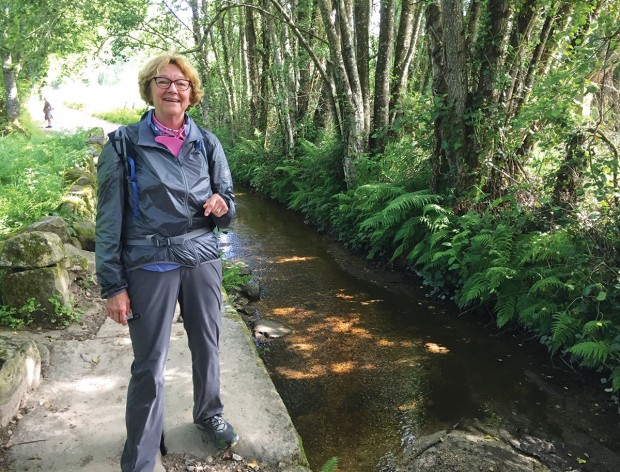 This is the second of a two-part series on Spain’s Camino de Santiago. Part I ran in November, when physicians Bina and Anil Dara shared their journey.

As a third-grade teacher, artist, wife, grandmother and involved community member, Susan Tallman is a woman on the move. Relaxation is not high on her agenda, and that’s by choice. So it made sense that when she planned her first international walking sojourn, it would be a vacation in motion – and, paradoxically, while walking nearly 15 miles a day, a chance to slow down and reflect, at the same time.

Walking 144 miles alone in 10 days along the Camino de Santiago was a challenge, and one she was prepared to face. But she had no idea that this adventure would prepare her for storms that lay ahead.

Susan had heard about the Camino, a network of trails that lead to Santiago de Compostela and the shrine to the martyred apostle St. James, from time to time over the past 10 years. “Every now and then, you hear someone who walked it; it always intrigued me, and I played around in my head with it for a while.”

“The thing they all had in common was that they were traveling by themselves – which for me was important, too,” she said. “I think your mind gets a greater benefit if you’re by yourself.”

Susan had traveled extensively with husband Don, but her first solo walking trip was an epic one. She applied for a grant from the Jamail Foundation, and got it, so her expenses were covered. She did a few 10-mile walks with friends, she read extensively, and she shopped for the right gear – “wicking” clothing that draws moisture away from the body; trekking poles; the right shoes.

There was also the mental preparation, which she had read was important. Nearing retirement, she decided to focus on her life and journal along the way.

“So I took my bag and backpack, I went down to Bush (International Airport) and said goodbye to Don, and I was off.”

She landed in Madrid and took a bus to Ponferrada, the last sizeable city she would see for 10 days.  “It was kind of fun, kind of scary, kind of overwhelming at times,” she said. Perhaps the biggest challenge was letting go of a sense of control.

“It was the first time in my life I didn’t know what to do. I didn’t speak the language, or even know how to get to the walking path…. We live in world where we have a lot of control, and I feel that’s part of who I am. I’m expected to be organized and have control, so that was hard for me to do that. To say, here I am at the mercy of whatever.”

At night she would journal on the sensations and experiences on the trail, and she found the walk to be a metaphor for her life. “So a lot of things like that come up and you say, ‘Oh! Am I too much in control in real life? Do I need to step back from that?”

It was a rich opportunity for reflection. “I would write about what I was doing in my normal life, and how it was different in my walking life.”

That lack of control was something that strengthened her faith, she said. “If you don’t have so much control, you have to rely on other things, and my faith helped a lot in that respect.”

It didn’t take long to test that faith.

On the first day, she was walking alone in a heavily wooded area where the path went down into a dark area near a little stream. “There were three big guys down there, laughing and patting each other on the back,” she recalls. “I thought – ‘ooh, should I do this?’ But there was no other way, so I took a breath and went on.”

The fellows did not speak English, but somehow they communicated to her that they were from Russia. She told them she was from Texas and a merry photo exchange ensued.

“After that, every time I ran into those guys, they would say, ‘Oh, Miss Texas!’ and they would give me a kiss on each cheek. They were like my guardian angels.” 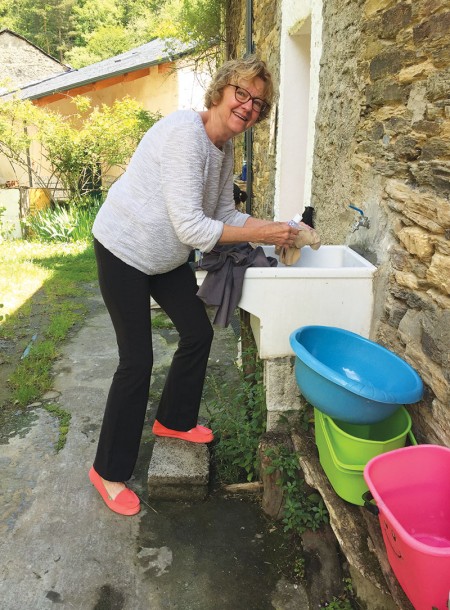 LAUNDRY ON THE CAMINO Like most pilgrims, Susan Tallman brought just two sets of clothing, to avoid the extra weight, so most days ended with hand-washing. "This particular day, the temperature was around 50 degrees, and the water in the basin was freezing!" she said.

Looking back, she realizes that it may have been that exercise in letting go and trusting that, later that year, helped her get through Hurricane Harvey. Don has breathing problems, so they left to stay with their daughter and family in Denver and ride out the storm there. When they learned that their home was flooded, she was anxious to get home and find out the extent of the damage, but had to wait for airports to reopen to book  the return flight. It ended up being a week, and she just decided to take it a day at a time and enjoy her time with her family.

When she came back and saw the extent of the disaster – ruined furniture, walls, appliances – it might have been overwhelming but for the help of her St. John’s School community, who set to work immediately, removing damaged sheetrock, carrying out the ruined belongings and sorting out what was salvageable. She took it all in stride with gratitude and equanimity.

“Maybe I have a little more tolerance now,” she said. “I feel I can let go a little more with some things, and maybe the flood was one of those.”

She was happy to be hiking the trail in the digital age, when she could upload the Bible and her favorite devotionals onto her cell phone and refer to them along the way. The cell phone was an integral part of her trip. It made her feel more secure to know that help was just a call away.

The walk itself was challenging, but as a schoolteacher she is on her feet a lot, and that wasn’t as hard for her as for some people – although on the third day, the steep hills forced her to get out her trekking poles.

Accommodations along the Camino include hostels and hotels with many amenities and also traditional, inexpensive, municipal pilgrims’ albergues – Susan stayed in one that housed 66 people. She’ll never forget the sight of 66 pairs of shoes lined up at the door – or the sound of the fellow next to her snoring. Susan found the private albergues, with rooms for small groups of women or men, the most interesting. Rather than plotting out the entire trip, she was able to use a guide to reserve the next day’s hostel the night before.

The lessons along the way were abundant, as was time for reflection. “I remembered personalities and how people respond to each other, and how that quick smile can make conversations flow or not flow – and I remember thinking a lot about how the body language, gestures, choice of words and all of that impacts the other person and makes them more open or not as open,” she said.

She applied the observation, once again, to “real life.”

“Some people are warm and open, and you gain a lot more from them, and they from you, than people who are closed and not willing to share who they are,” she said. “A lot of times we get caught up in that. People are scared to put their true self out there; it’s a lot easier to hide behind the facade and not put yourself out there so much. But that cheats us out of a lot of things in life.”

Most important, however, was the mental space it gave her for reflection and prayer.

“I felt it made a difference in terms of my closeness to God. That’s something that’s really important to me, and it takes time for that to happen. On this walk I had time to do that.”

Some of the most poignant moments were when she would sit on a bench or stand near a tree and just talk to God. “I felt a closeness I hadn’t felt before. I think our busyness gets in our way a lot. I learned that if we don’t prioritize it, we don’t get the results we would like.”

Coming back, the busyness has resumed, but something has changed. The quality of that connection, she says, has remained.

“It’s more of a receiving now, rather than just putting it out there – and it’s all because I opened myself and gave time for it.”