Healthy options for the New Year 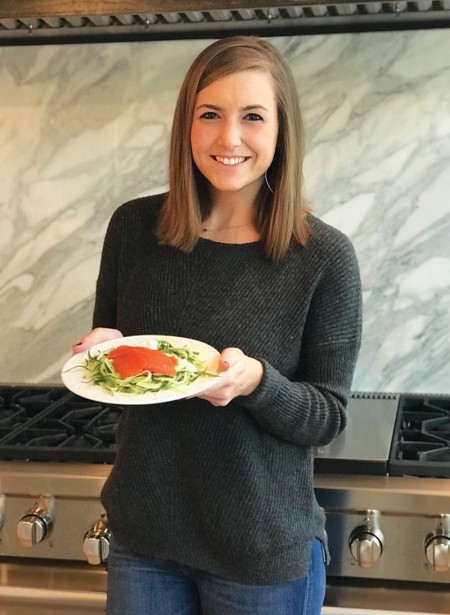 Hello, January. You’ve come to greet us just when we thought we couldn’t stuff in another heavenly Christmas cookie or swig another boozy eggnog. Just as we’re having to pull out the drawstring pants. Thank you, New Year. We are ready for some veggies.

But not so fast. We can’t come off all that yumminess and go straight into virtue. Can’t we have veggies that taste good?

The answer is more than yes. Not only can veggies taste good, but they also can be mistaken (with a little imagination) for pasta. By treating them like noodles, vegetables like zucchini, squash and sweet potatoes morph into healthy versions of spaghetti and lasagna. One fan raves, “They really help with my carb fight.” Bring them on.

So how do you “do” veggie noodles? “There’s a machine I bought at Walgreens that spiralizes squash and zucchini,” says Elizabeth Karkowsky. “You put the zucchini in, and it turns it into spaghetti strands. Kind of like those pretty bows that you make by sliding scissors down the ribbon. That’s how the zucchini turns out.”

Elizabeth suggests draining the zucchini ribbons by wrapping them in paper towels and letting them drain in a colander “for a while.” Afterward, “use a little Pam olive oil spray or a little olive oil and sauté the zucchini to soften it up. Then you’ll have to drain it more. You can [top it with] turkey or hamburger spaghetti sauce or just pasta sauce from the jar. Everybody loves it.” Which says a lot, since Elizabeth is feeding two middle schoolers and a husband. “If the kids still want pasta, I’ll do half pasta and half zucchini ‘pasta.’ You can’t tell the difference when you’re eating it. You have to slowly integrate this into your family, if you know what I mean. But over time, they’ll now say, ‘Let’s do the zucchini spaghetti.’ You feel like you can eat more!”

Elizabeth hits the mark with her instructions to drain the zucchini: Veggie spirals do take a little trial and error. “I tried it and it was a disaster,” says Heather Kearney, owner of a baby boutique and mom of two. “[Daughter] Bridget spiraled the zucchini (that part was fun), and I mixed it into the pasta I was cooking, but I was late getting dinner on the table and distracted and didn’t take into account cooking time. Or look at a recipe. It was a big pile of goo with tomato sauce on top of it, and Wayne was literally like, ‘What the hell is this?’”

Another veggie noodle enthusiast agrees. “For a while I was steaming or boiling the noodles, and I definitely thought they had no flavor,” she says. “But with a tiny bit of olive oil or some Tony Chachere’s or seasoned diced tomatoes out of a can, and with liberal amounts of parmesan cheese or pesto, it’s much yummier.” And to Heather’s point: “You can’t cook it too much, or it will get smushy.” This (unnamed) cook adds, “I still favor spaghetti squash. It stays firmer.”

NICU nurse and clean-eating Instagrammer Courtney Spafford uses a lot of veggie noodles. “My mom is a huge cook and a health nut, and I grew up in her kitchen,” she says. “When I started living on my own after college and needing to cook my own meals, I started following Instagram accounts. Back in May, I had the guts to start my own (@foodcourtfinds), and I post recipes. For the most part, I try to stick with foods that are not as processed, so I’ll use zucchini and cucumber noodles all different ways. Cucumber noodles with smoked salmon, chicken noodle soup with zucchini noodles instead of pasta. Once it’s in the broth, it really tastes like noodles.

“A couple of months ago, my roommate and I ordered in Pad Thai. I had actually never had it before and thought it was so good. I knew I had to recreate it so I could have it more often, so I played around in the kitchen to replace the high starch and sugar using zucchini noodles.”

Veggie noodles – zucchini, butternut squash, beet – also are available pre-cut and boxed at grocery stores. “They’re good in a pinch,” Elizabeth says, “but you have to buy a lot, because the noodles shrivel up like spinach once you sauté them.” Too, many report that the boxed noodles sometimes come home “slimy,” and fresh veggies “last longer and are so much cheaper.”