Behind the Scenes as a Galveston Mardi Gras Duchess 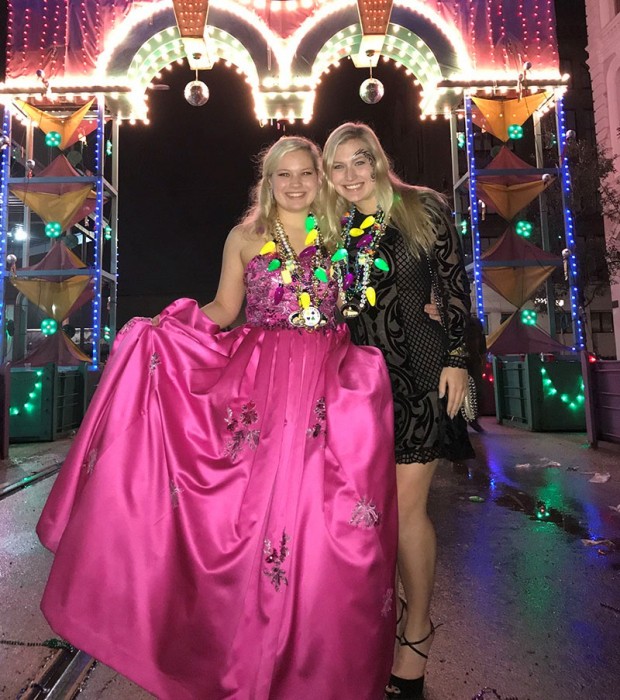 Sisters Haley Kurisky and Holly Kurisky pose for a photo together under the Tremont House Mardi Gras Arch.

Happy Mardi Gras! Today is Fat Tuesday, which marks the last day of partying before Ash Wednesday and the Lenten Season. In the Catholic tradition, Lent is 40 days and nights of fasting, abstaining from celebration and thoughtfulness before Easter. Mardi Gras and Fat Tuesday are the party before the calm.

Across the country (and world!), people celebrate Mardi Gras. In Galveston, the Knights of Momus, the oldest “Krewe” on the island, puts on the largest parade and celebration. It holds a royal court and crowns a queen from among 24 duchesses/debutantes. 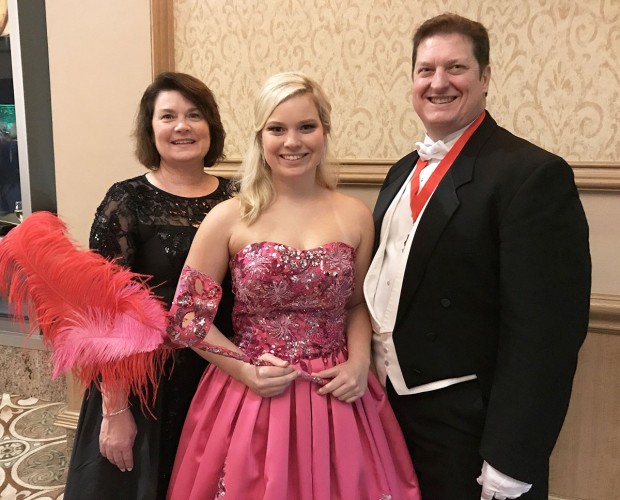 Haley Kurisky (middle) with her parents (Kay, on left and George A. Kurisky, Jr., on right) at the party after the presentation at the Opera House on Saturday of the first weekend of Mardi Gras.

My father, George A. Kurisky, Jr., is a longstanding member of the Knights of Momus. Because I turned 21 in June, I had the opportunity to become a duchess.

For duchesses, there are two significant weekends full of events. On Friday of the first weekend (this year Feb. 2-3), the Knights of Momus holds a President’s Party featuring Momus members and duchesses. My family and I practiced our blackjack skills (with tokens) at the gambling tables and took pictures in front of the Tremont Hotel Mardi Gras Arch. On Saturday, the duchesses are formally “presented” by their father or Momus member at the Galveston Grand Opera House. The duchesses perform the elaborate Texas Dip - a bow that requires the deb to go all the way down to the ground, touching her nose to the bottom of her dress.  I was definitely a bit nervous for this part, considering all the duchesses are wearing big gowns, petticoats, and heels during the bow. Fortunately, my bow went off without a hitch. I’m so glad my dad was able to present me onstage. 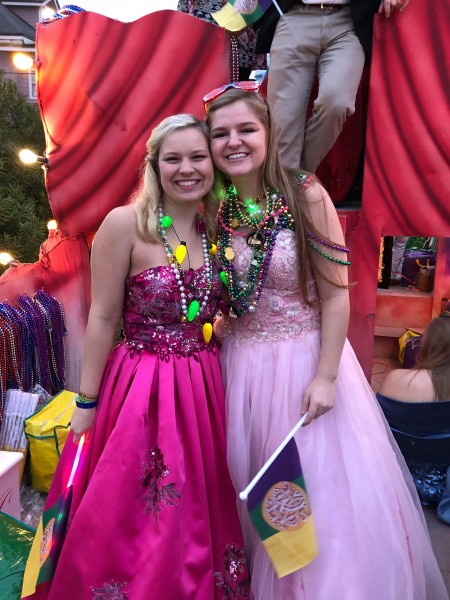 Duchesses Haley Kurisky and Paige Raun on the float together before the main parade began.

Following the presentation, the duchesses and family members were whisked off to the San Luis Convention Center, where a huge party (decorated in the theme of the old Balinese Room in Galveston, where illegal gambling used to take place).  We danced and ate and took tons of pictures. It was an exhausting day after very early rehearsal sessions at the Opera House, so many participants called it a night at or before 1 a.m.

The second weekend of Galveston Mardi Gras (Feb. 9-10) was the party weekend. Friday began with the San Luis Salute, a huge party thrown by Galveston native Tilman Fertitta (current owner of the Houston Rockets). At the pre-party, the duchesses and a few exclusive guests were treated to a performance by synchronized swimmers, cocktails served by models and endless glasses of champagne, all served poolside. 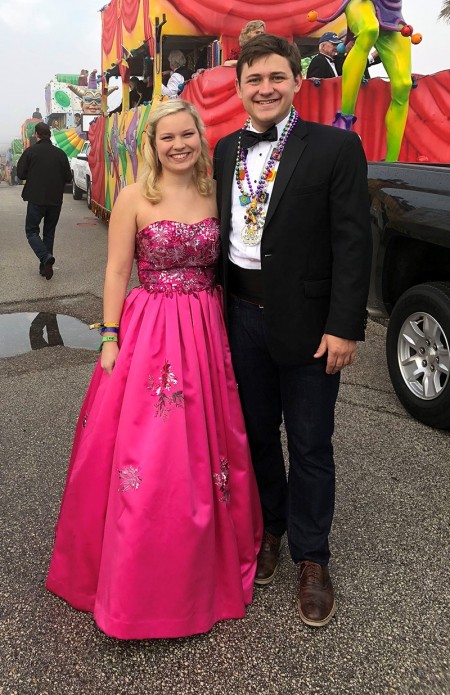 Haley Kurisky and Jake Nyquist taking a moment in front of all the floats before the parade began.

The festivities then continued at the Galveston Island Convention Center. The duchesses were presented again, in front of 1800 people, including multiple congressmen, University of Houston President Renu Khator, Houston Police Chief Art Acevedo and more VIPs. The duchesses walked through a tunnel of swords and took pictures with the Fertitta family. The presentation was followed by an amazing dinner, performances (including a quartet that played classic rock songs, a champagne bath performance and a laser performance), and finally, a live concert by the band Blondie. They played all their hits, including One Way or Another and The Tide is High. The Big Beyond, a cover band from Atlanta, played the rest of the night. 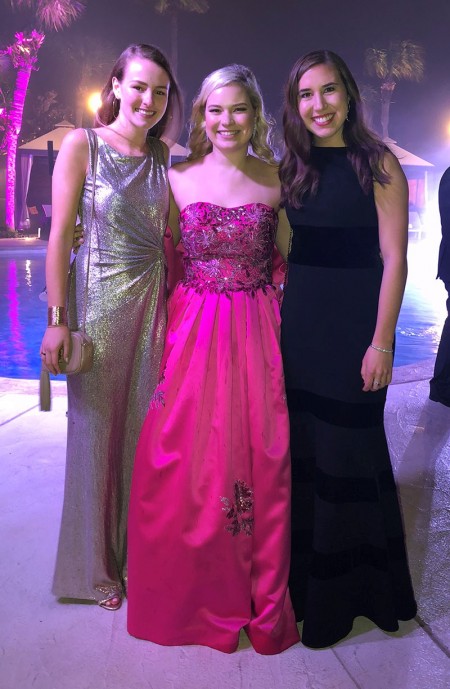 (From left) Friends Caroline Funderburk, Haley Kurisky and Ellie Smith at the pre-party/champagne toast before the San Luis Salute.

Saturday is highlighted by the Knights of Momus Grand Parade. The Momus duchesses ride the various floats and throw beads, doubloons, cups, and other Mardi Gras themed jewelry to the assembled street crowds. I rode the “pharaoh” float, and was fortunate to stand in the front in order to best see the crowd.  We were provided with tons of beads, and lined up two hours before the start of the Grand Parade to get ready. Starting at about 6:30 and lasting until 8:30, the duchesses and their escorts threw all the beads we possibly could, ending up at the Tremont House, where our friends and families waited for us. We were presented once more, and were able to get some food and continue dancing.

Being a Mardi Gras Knights of Momus duchess was so fun and special, and I am grateful for my family and friends for supporting me. The past two weekends are already incredibly special memories for me that I won’t forget for the rest of my life. Happy Mardi Gras!