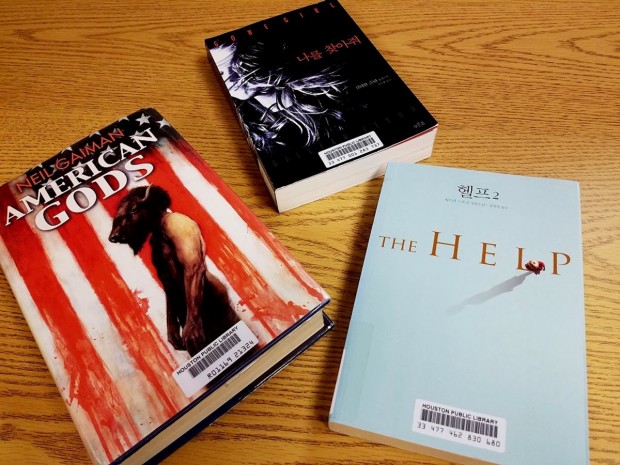 Nothing stops me in my tracks quicker than an intriguing book cover, and I’m going to highlight a few bestsellers that have awesome international editions.

Gone Girl by Gillian Flynn – Korean edition I love how this cover take the essence of the original cover (the very sharp, wiry shapes) and makes something new of it. Using the hair for shape is an awesome nod to the familiar American version! I have yet to read this book, but I did see the movie and I can attest to the tense and twisty mood of the whole thing. Good job, cover designers.

Harry Potter and the Order of the Phoenix by J.K. Rowling – German edition One of the most widely-printed series ever, of course, has some fantastic editions. I found this German edition of Order of the Phoenix and was struck by this rendition of Harry. He looks super mischievous on the cover, which we don’t really see with the original illustrations.

American Gods by Neil Gaiman – Spanish edition I love this edition of American Gods! Though he seems to be perpetually on my “to-read” list, this Spanish cover definitely caught my attention and could push me over the edge down into the Neil Gaiman universe.

The Fifth Mountain by Paulo Coehlo – Arabic Edition The use of color is really great with this cover; washing everything out with red gives an impression of the tome of the book (apparently desperate at times) and we get a glimpse of the landscape.

Harry Potter and the Half-Blood Prince by J.K. Rowling – Italian edition Told you HP has some seriously cool cover art! This Italian version of Half-Blood Prince has lots of movement and evokes images of Patronus charms and wispy memories.

The Da Vinci Code by Dan Brown – German edition Looking more like a Stephen King title than a detective thriller, this German version of The Da Vinci Code makes you feel like danger is lurking at the turn of every page. I’m loving the dark contrasting colors. For more tasty book covers, visit these links for pretty & feminine covers and minimalist covers!