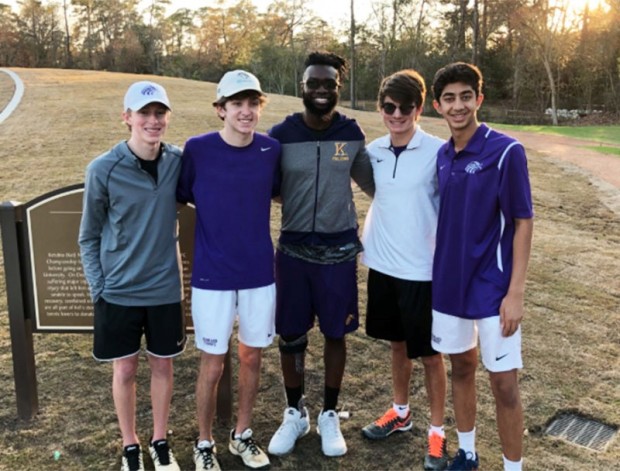 Kelubia Mabatah, Kinkaid 2005 graduate and tennis player, was honored at the unveiling ceremony of the beautiful new Kinkaid 8-court tennis facility. In his name, “Kel’s Hill,” seems like a small birm with seating in front of the courts for spectators to enjoy tennis action. However, the hill is much more. It represents the incredible story of Mabatah: his unbelievable courage, amazing strength, unmatched perseverance and desire to live life.

After graduating from Kinkaid, Mabatah went on to play collegiate tennis at TCU, then decided after graduation that he wanted to work at his father’s company in Nigeria. It was there that he was brutally attacked by four men and left for dead. He suffered traumatic brain injuries, lack of the ability to speak, and paralyzation of his right side. Mabatah has endured countless surgeries and, in 2015, began rehabilitation at TIRR Memorial Hermann. The Kinkaid community, including his former classmates, administrators, parents, staff, current Kinkaid tennis team players, and all who admire Kel came out in full force to support him as he hit the first volley on the new purple tennis courts located in front of “Kel’s Hill.” 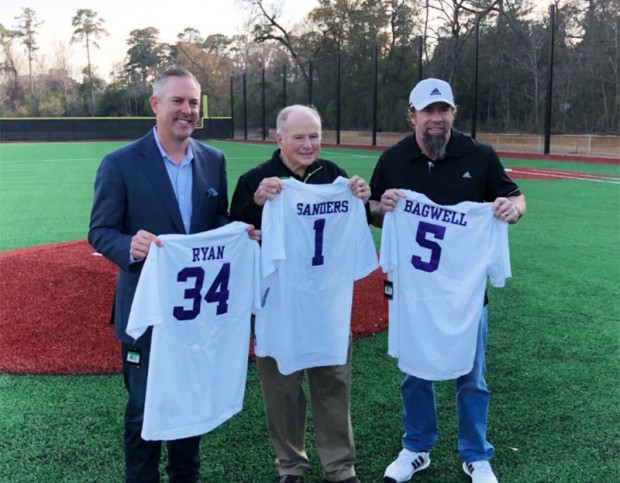 (From left) Reid Ryan, Don Sanders and Jeff Bagwell at the unveiling of The Don Sanders Family Baseball Field at The Kinkaid School. (Photo: Andy Martire)

He addressed the crowd with an emotional, inspiring speech that touched everyone who was there. As a member of Kinkaid’s tennis team, I am most proud to play specifically this year, knowing Kel’s story, the unbelievable hardships he has faced, and how he has courageously fought to live and be a role model for all, but most especially Kinkaid’s tennis program.

On the same afternoon, Kinkaid’s new baseball field, The Don Sanders Family Baseball Field, was dedicated to the school. On hand at the ceremony was Don Sanders, whose philanthropy and love of baseball made the new practice field a reality, along with president of the Houston Astros, Reid Ryan and Astros Hall of Famer, Jeff Bagwell.