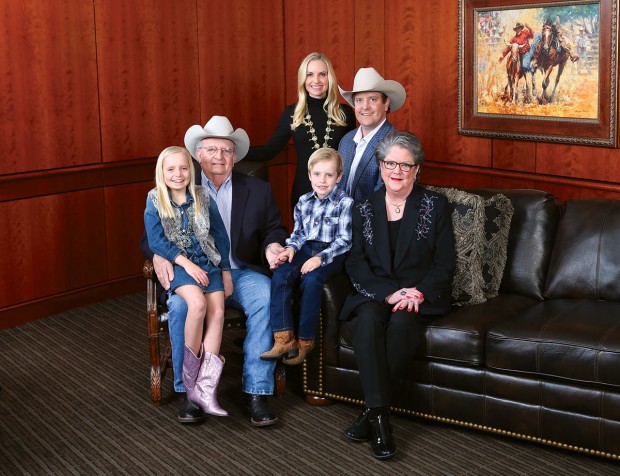 When it comes to building dynasties, the Houston Livestock Show and Rodeo should claim a patent on the formula. Eighty-six years of effort – and a whole lot of donated talent – have generated a successful rodeo empire which has become Houston’s centerpiece festival, agricultural show and concert series. The massive nonprofit effort, which funds college scholarships, is fueled by a volunteer base of 33,000, led by a staff of 100-plus employees.

Whether volunteering on one or more of the 108 committees or simply by buying a ticket to a show, most everyone in this city has been touched in some way by HLSR. Some of those who have been around since the beginning have three or four generations of family members who have followed in their footsteps.

Take the Smith clan of Memorial. They make up three generations of lifetime members. John O. Smith and his wife, Judy, joined the Rodeo in 1972. Their son, Ryan, was given a lifetime membership when he was just 1 week old, a tradition he and his wife, Jill, have gifted to their 8-year old daughter, Lillie, and 6-year-old son, Pearson.

“It’s fun to see the second and third generation come through,” said John O., whose list of accomplishments is longer than a Sunday sermon. He owns an oil and gas consulting firm, JOS Energy, and his HLSR resume is capped by a term as top dog, chairman of the board from 2003 to 2005. He says watching the evolution of Rodeo dynasties has been exhilarating. 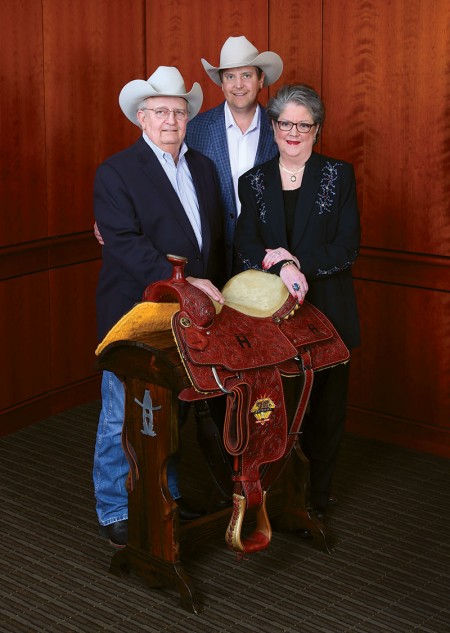 Former board chair John O. and Judy Smith, and their son Ryan, a board member, are lifetime Rodeo volunteers. (Photo: lawellphoto.com)

“I can think of a lot of people who are in the same situation as mine. There are a lot of my friends who started out as committeemen who now have sons and daughters and grandchildren coming up and joining the Jr. Rodeo committee (JRC). I’ve met a lot of good people, and I’ve made really good friends. The Houston Livestock Show and Rodeo is family.”

The devotion is matched by that of his son, Ryan, who lives in the nearby neighborhood of Briargrove with his family. By day he is managing director at Wortham Insurance, but he spends many hours serving the Rodeo, currently sitting on the board of directors and both the Agricultural Mechanics and Mutton Bustin’ committees.

“When someone asks why we do it, it’s not just the cause behind it, which is amazing and the whole reason we’re all out there, but also camaraderie and the true lifelong friends I’ve made here,” said Ryan. “You have your high school friends and your college friends, but my rodeo friends are really a huge part of my life and the folks that I could call in the middle of the night if I need something.”

Ryan views his role as co-founder of the ultra-popular Mutton Bustin’ committee as his most powerful contribution. The event was introduced to HLSR in 2009, and as far as fan appreciation goes, only bull riding appears to generate as much pure spectator glee as Mutton Bustin’, where children between the age of 5 and 6 clamber aboard a wild, wooly sheep and try to hold on for six seconds as it races around.

Ryan and his wife, Jill, a volunteer with the Trailblazers committee, allowed their kids to “bust mutton” in this HLSR rite of passage. The process to sign up your child is now a lottery system, which can have thousands of names. There is an equally popular Mutton Bustin’ arena in The Junction, outside on the carnival grounds. The committee, which started with just 90 volunteers and has grown to 425, is made up mostly of young families.

The current board chairman, Jim Winne, has been a committeeman for 37 years. While his family has a history of rodeo and ranching, he was the first member of the Winne clan to join HLSR. Winne’s daughter, McKenzy, with whom he raises cattle, is continuing the tradition as an active rodeo member. She is a former participant on JRC, a committee that allows young people between 17 and 20 to volunteer while being mentored by adults. 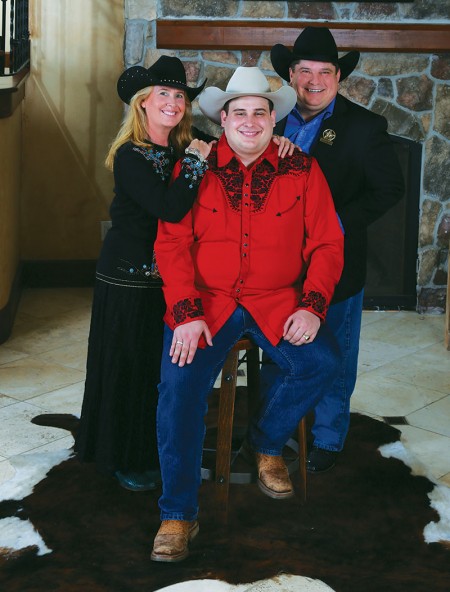 LEGACY HLSR board member Bill Jordan, with his wife Teresa and their son Cameron, are building a Houston Livestock Show and Rodeo legacy. (Photo: lawellphoto.com)

“When you think about how we’re getting close to approaching the 100th anniversary and how many families out there who are third and fourth generation of involvement, it’s really their contribution that has built this legacy,” said Jim. “That’s why this year we’re celebrating the spirit of the volunteer. They’re all so dedicated and give so much of their time and money and keep coming back.”

Teresa and Bill Jordan of Bellaire are building a different brand of Rodeo legacy. Teresa, managing counsel for Cigna Health, and Bill, president of Bayou Banks Classic Homes, have both been HLSR members for the past 15 years. The couple serves on no fewer than 10 committees between them. Bill also sits on the board of directors. It is a degree of extraordinary devotion that became more resolute in the wake of the Jordan family’s darkest day.

“He went to sleep, and he woke up in heaven,” said Teresa of her son William.

On March 3, 2009, the 16-year-old Lutheran High North sophomore and rookie JRC member suffered a fatal seizure. He was a smart, outgoing and talented athlete who loved everything about the Rodeo. He begged his mom to make every connection she could so he could get on JRC as soon as he was eligible.

“My son’s funeral was during opening week of the show. There were 1,200 people at St. Michael’s Catholic Church. It was standing room only. I never realized I knew that many people until I looked around that room, and that church was full of Rodeo people.”

Fellow volunteers wore black bands on their badges. People the Jordans had never met offered comfort and support. Teresa says the outreach provided the tonic she needed to endure, and her work at the rodeo offered a precious avenue for filling the void left by heartbreaking loss. She joined the Jr. Rodeo committee that same week. Driven by their son’s love of the Rodeo, the Jordans’ ongoing involvement has grown into something bigger than either could have imagined.

“Bill and I were trying to think what we could do. Our son’s love of the show was as strong as ours. We wanted to do something that would continue his memory in a very everlasting way but continue to have an impact. So we started the William Lewis Jordan IV Memorial Endowment. We do scholarships through that every year, and it enables Will to continue to touch and will continue to touch someone’s life in a very meaningful way.” 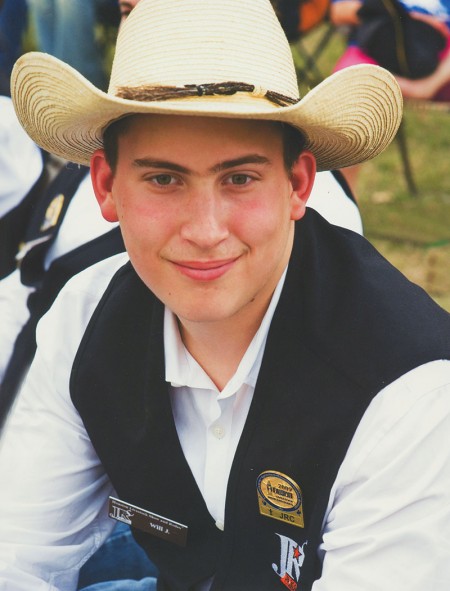 Will Jordan, who passed away at 16, will forever be part of the Rodeo family. Will’s family created an endowment in his name that awards an annual $20,000 scholarship.

The endowment started at $60,000 and funds a $20,000 scholarship each year. Well on its way to becoming a self-fulfilling endowment through continued contributions, the fund has awarded eight scholarships in her son’s name – eight names that Teresa knows off the top of her head. Her home is decorated with the students’ pictures.

“It’s the funnest day of the year to go to that scholarship banquet, and you meet your scholarship student and their family. They’re studying biomedical engineering or geophysics. One of these kids is going to come up with a cure for cancer one day, and our son, Will, and our family will have been a part of that child’s journey. How cool is that!”

Their youngest son, Cameron, is also a former member of the JRC. The now-23 year old currently is a member of the Sheep and Goat committee, his commitment unwavering even though he goes to college in San Antonio. He comes back for meetings and spends Spring Break and holidays getting in his volunteer hours. (Volunteer requirements range from committee to committee, but most require attending at least 3-4 meetings a year and working several long shifts during the Rodeo.)

“I feel a responsibility to give back especially after how involved my family is,” said Cameron. “I will always be part of the Rodeo. I'm proud of my parents for what they have done and keeping my brother's memory alive. He was not only my brother but my friend and a great person, and it’s special that he can continue to touch many more lives.”

“It’s something that we do as a family,” said Teresa. “We all have that connection. It’s a strong legacy we’re building, and we hope this endowment will still be around long after Bill and I are gone.”

HLSR will award more than $26.7 million to support education this year. Since 1932, $450 million has been awarded. Currently, more than 2,000 students are on Rodeo scholarships.

With 45 years of his life dedicated to the Rodeo, John O. Smith likes to give newcomers advice.

“I give speeches out here to rookies from time to time, and I like to point out all the exit doors. And I warn them if you hang around the show very long, you get hooked. It changes how you set your social schedules. It changes your vacation times. It changes your life.”

Then he closes. “Welcome to the family.”

The Riot presents "Stand Up On The Spot" with Jeremiah Watkins