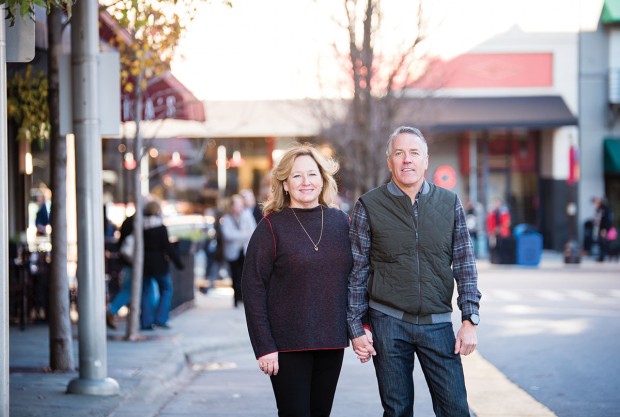 Peggy and Brad Holmes in front of the Haywood Park Hotel, where their romance with Asheville began. (Photo: carrieturnerphotography.com)

Maybe it’s the twang of bluegrass in the air, fresh as the farm-to-fork food on your plate. Maybe it’s the sunsets that light up the blue mountain vistas that stretch for miles; maybe it’s the hundreds of local artists and the thousands who come from afar to soak in the colors and the culture. Whatever it is, Asheville, N.C., has captured the nation’s heart.

To the Hablinskis and the Holmeses, Asheville is as much home as Houston. Both couples fell so in love with this unique piece of Americana that they decided to buy a second home there. They gave us an insiders’ view of the place Lonely Planet called “Appalachia’s most surprising city,” putting it at the top of its Places You Need to See in 2017.

Dorothy Hablinski grew up visiting her maternal grandmother in Asheville, where she had moved. Dorothy herself grew up in Brownsville, nurturing an appreciation of authentic culture and country life instilled by her ranching family. So when she would escape to the Blue Ridge Mountains of North Carolina, she was fascinated by the culture she discovered there.

“I loved the mountain people,” she recalls. “They were a very poor people but very amazing, and my grandmother would take me up to the mountains to meet the mountain people: ladies who smoked pipes and did all kinds of interesting things and made all kinds of fantastic handwork. I remember going to the Henderson County market where the country people would bring their wares. I remember picking sweet peas in her backyard, and it’s just a magical place.”

She grew up reading books about the region – a favorite was Christy – Catherine Marshall’s classic about a girl who leaves a life of luxury in Asheville to teach in a mission school in a poverty-stricken Appalachian town. 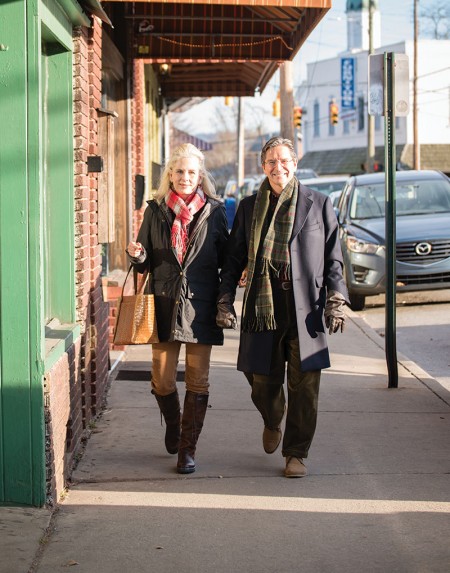 WESTSIDE STORY Dorothy and Mark Hablinski stroll Haywood Road in the business district of West Asheville, originally a separate city, which has become popular for families to live, work and play. (Photo: carrieturnerphotography.com)

Dorothy’s grandmother eventually sold her home and moved to San Antonio, and her connection with those mountains was temporarily lost. When Dorothy met her future husband, Mark, she was delighted to learn that he loved the Carolinas, as well. He’d been on several golfing trips there and had been struck by the beauty of the place.

“I just fell in love with North Carolina – one, the people are so incredibly friendly there, they remind me of people in the South – because it basically is the South,” said Mark. “No. 2, it’s green.”

The Blue Ridge Mountains are among the oldest in the world, and rainfall is plentiful, making for a lush, waterfall-filled landscape that inspire artists, poets and writers.

Peggy Holmes and husband Brad were living in St. Croix in the U.S. Virgin Islands when they got married. Peggy was working for the owner of the Buccaneer Hotel on that island, and he was part of the gentrification of downtown Asheville, where he bought the historic Haywood Park Hotel.  “He told us, ‘I’ll give you two days of my hotel for your wedding gift, but you need to write it up for me,” she recalls. “So that was our introduction to Asheville.”

They loved the town and the Blue Ridge Mountain region, and on their 17th wedding anniversary, her husband surprised her with a trip. “He had his hand over my eyes until I was on the plane – and he surprised me with a trip to Greenville, where we rented a car and drove up to Asheville. And that’s when we started looking for a house.”

The Holmeses are big outdoorspeople, and they have loved hiking in all seasons in DuPont Forest in neighboring Transylvania County – home to some of the region’s most beautiful waterfalls, including Hooker, High, Triple and Bridal Veil Falls. They’ve climbed to the top of spectacular Mount Pisgah in the Pisgah National Forest. Asheville is also a favorite destination for whitewater rafters, and the Holmeses have rafted the Nolichucky and the Nantahala, the North and South Toe, and the French Broad, which runs right through town. 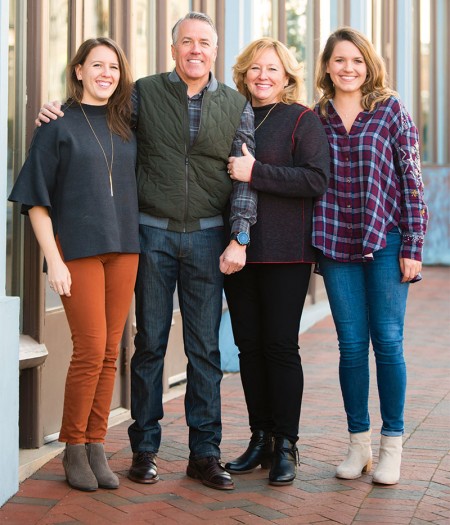 Like most Ashevillians, the Holmeses and the Hablinskis have their favorite bear-encounter stories. Peggy’s favorite features another Bellaire resident, Carla Buerkle. “Carla and I were hiking off Blue Ridge Parkway, and we went between a mama bear and her cubs,” she recalled. “We saw the cubs first; they were up on a rock, then we stopped – then I saw the mom stand up and I said, ‘Uh-oh… back up. Clap your hands and back up.’ That was the first time I’ve actually been out in the woods and came that close to a mama bear and her cubs – she was just about 15 feet away. That was kind of a neat moment; it turned out the way I wanted it to.”

The Hablinskis, who live on a mountainside in a home designed by Mark’s architect brother, didn’t even have to step outside to see a bear.

It was their son Phillip’s first visit, and he was on the downstairs porch. “He looked down and was shocked because it was like an 800-pound black bear – and he didn’t know whether to run inside,” said Mark. “When he ran in to grab his phone to take a video, the bear had already lumbered off.”

Other wildlife frequently make an appearance in the picture windows overlooking the forest, as well. “When we had all that snow recently, Dorothy happened to see a huge buck slowly sauntering through the backyard with snow up beyond his knees and reaching up and eating off a tree,” Mark recalled. “It was magical.”

Close encounters of the natural kind are among the best of what Asheville has to offer, but there are cultural offerings, as well. “Artsy Asheville,” as Lonely Planet has dubbed it, is an architectural showcase and home to galleries and studios. Architecture enthusiasts marvel at the magnificent Grove Arcade, one of the first and biggest shopping centers in the South; the Spanish Renaissance-style Basilica of St. Lawrence and the jaw-dropping 250-room Biltmore Estate home, said to be the largest private home in the United States. 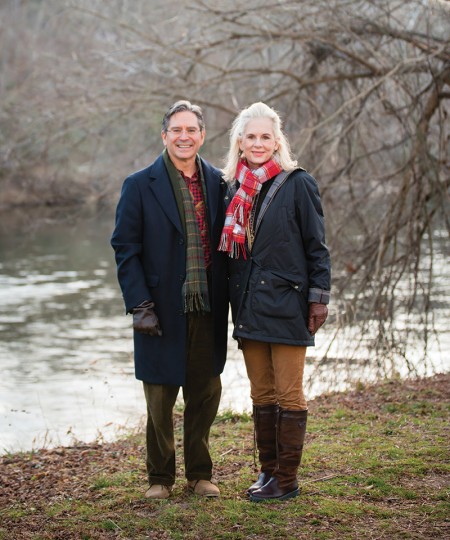 If the arts are your thing, the River Arts District alone is home to more than 200 artists – that’s a mile-long stretch of industrial and historical buildings along the French Broad River turned into artist studios, galleries, restaurants, cafes and even a brewery. And if you’d rather get your art fix on the Blue Ridge Parkway, the Southern Highland Craft Guild’s Folk Art Center showcases traditional and contemporary crafts of the Southern Appalachians. Or get behind the scenes with an intimate artist-led studio walking tour.

Peggy, who is an art teacher, says, “People actually support the fine arts, and it’s refreshing. In Houston – I don’t have anything against making money – but I really feel like in Asheville they’re more in tune with what it takes to create something.”

With its locavore, farm-to-table food ethic and more than its share of James Beard connections, Asheville’s “Foodtopia” has caught the fancy of writers from Zagat and others; and Fortune was probably not the first to call the town one of America’s best new cities for beer lovers for its microbrewery scene. And Thrillist dubbed the city one of America’s 12 Great Music Cities.

But for dog lovers, Asheville is all of that and more, because four-footed friends are welcome virtually everywhere. The Travel Channel recently named the town one of the nation’s Top 5 Dog-Friendly Towns. Dog-friendly venues range from the elegant (Battery Park Book Exchange and Champagne Bar) to the laid-back (Asheville Pizza and Brewing Company) and Aloft Hotel and its bar. At Hotel Indigo, it seemed like every guest there recently had their dog with them. Many restaurants have a dog-friendly patio. And where else can you find Three-Dog Bakery, the original artisan bakery exclusively for dogs? Or, if you need to tour a site that doesn’t allow pets, a pet sitter like Happy with Cappy is an option.

For Dorothy, whose every trip to Asheville takes her back to her childhood wonderland, the most important aspect is the natural beauty and the authentic culture that has sprung from that landscape. Listening to the wind in the mountains, listening to the dulcimers play, the sound of the old days is still alive for her. She treasures a dulcimer her grandmother bought for her when she was little.

Dorothy’s family was involved in natural-history conservation in South Texas, and she worries about loss of culture in the Blue Ridge Mountains with the rapid influx of outsiders to the area.

“America is beginning to lose our identity,” she says. “A lot of these people don’t have a lot of material goods, but they are rich in tradition, rich in American culture, rich in faith…. It’s vitally important we keep these traditions alive, these American ways of life.… More than anything, what we gain from being there is the tradition of a part of America we need to hold on to.” 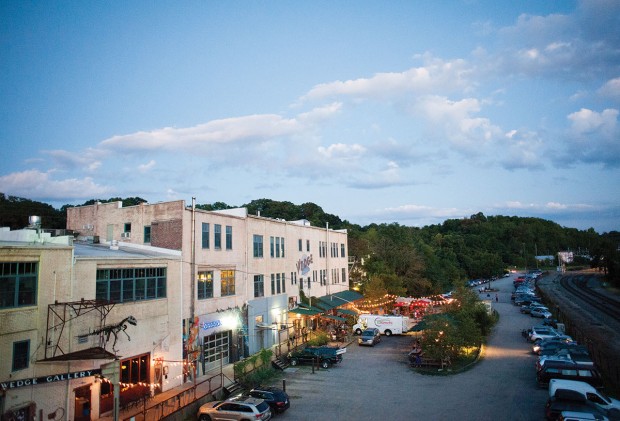 The Wedge Studios is at the heart of Asheville's River Arts District, a series of more than 20 formerly industrial buildings along the French Broad River that are now home to artists’ studios, primarily. This vibrant neighborhood also includes local restaurants and breweries, including Wedge Brewing (pictured). (Photo: carrieturnerphotography.com) 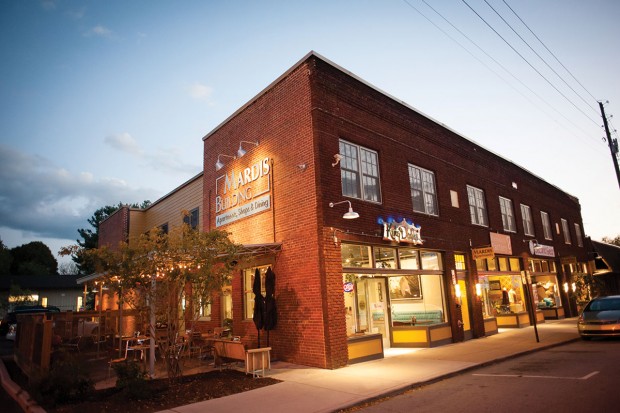 The Mardis Building was rehabilitated to its original 1926 appearance and is part of a group of buildings added to the National Register as a historic district in 2006. Today it houses apartments and businesses, such as King Daddy’s Chicken and Waffles. (Photo: carrieturnerphotography.com) 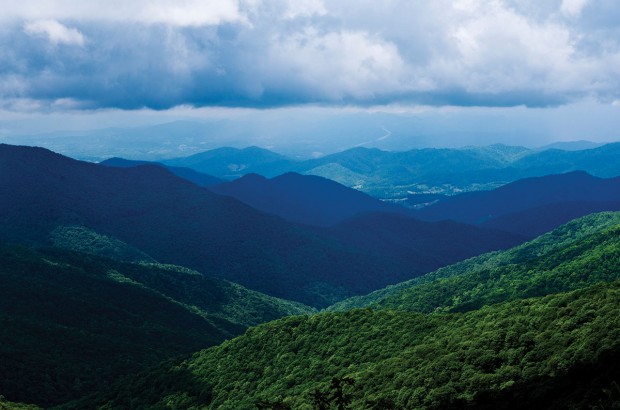 The Blue Ridge Mountains are among the oldest in the world, and rainfall is plentiful, creating a waterfall-filled landscape. 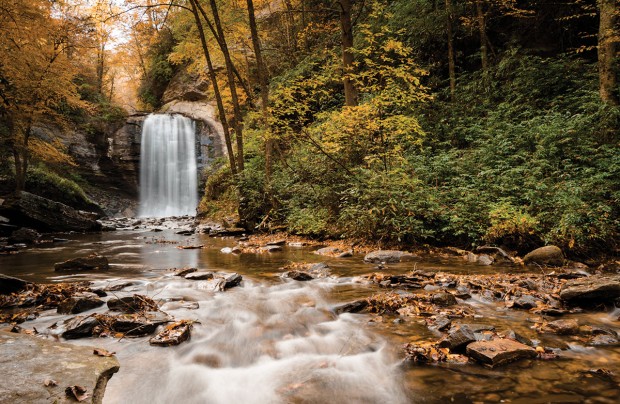 Looking Glass Falls is one of the most popular and beautiful waterfalls in North Carolina, as well as one of the few accessible roadside. Its name comes from Looking Glass Rock, where water freezes on its side in the winter and then gleams in the sunlight.