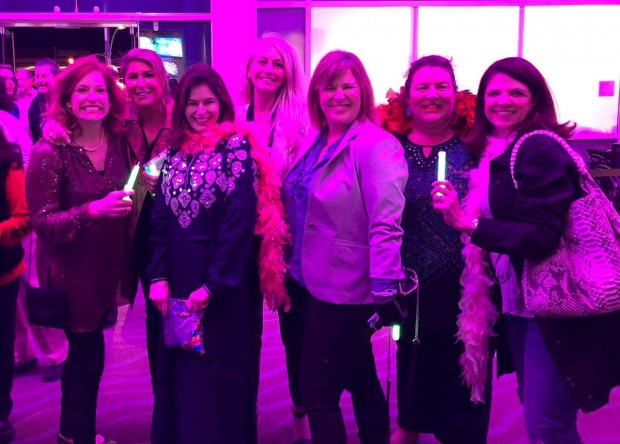 I recently had the privilege and adventure of driving “Muber” - Manilow/Mom Uber - for an entourage of fabulous female Fanilows (fans of Barry Manilow).

We don’t know each another, but like a game of six degrees of separation from Kevin Bacon, our common thread is being Facebook friends with Jackie Sharbrough. Jackie had posted a rally cry for Barry Manilow-worthy partners-in-crime at his upcoming concert. When the magical night arrives, this glorious group of gals gather at Jackie’s gorgeous West University home.

After quick pleasantries, Amanda Dearborn, Dominique Kendall, Bari Blanks, Stasie Smith, Margaret Pearce, Jackie and myself pile into our limo for the night (also known as the Fuller family’s “nearly 200,000 miles logged” 2007 Explorer Being the southern belle that she is, Jackie brings a wicker picnic basket of snacks for our journey. 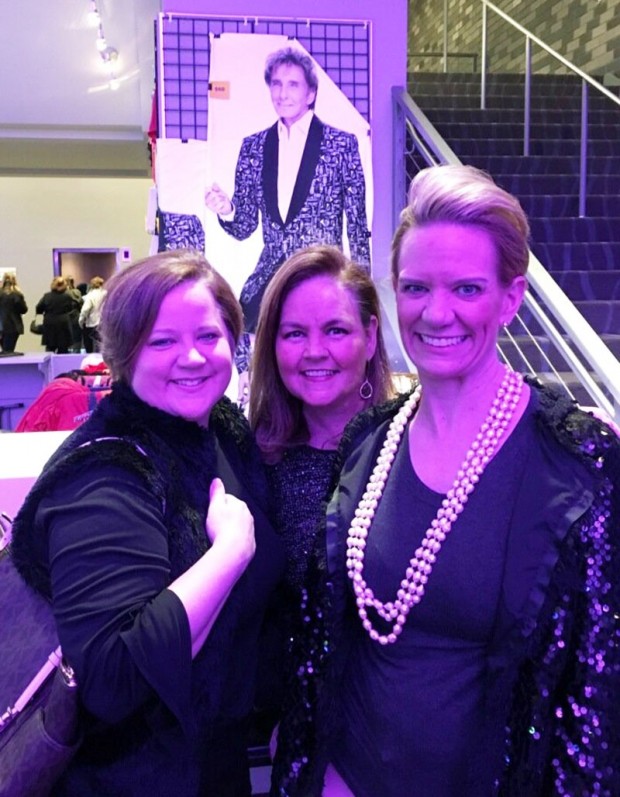 Our adventure starts innocently enough. Barry Manilow tracks cued up on a cellphone, we gleefully croon along to hits like I Write the Songs that Make the Whole World Sing and Looks Like We Made It. A youthful, inspired bit of giddiness and “I can do anything” burst of energy permeates the air. (Good thing too, because the Explorer’s air conditioner has been acting up

The lightning-quick, instant female bonding begins. No topic is off limits. No cackle is too loud. No shirt is too sparkly. No boa is too feathery. Let’s just say some of the conversations during our ride would have made Barry blush. (Sorry, readers, what happened in the Muber stays in the Muber. I had to swear on my favorite tube of red lipstick.)

My sides hurt from laughing so hard. My respect for the Manilow Tour Bus Driver grows as I attempt to stay focused and grip the steering wheel. I’m cautiously attempting to drive in a narrow opening between two concrete walls. A deathtrap also known as the “Southwest Freeway High Occupancy Vehicle lane at night”. Thankfully my shoulders begin to relax. On the horizon I glimpse beautiful purpley lights cascading across the sky. Yes, we are not in West U anymore. We have entered a new dimension: A fantastical and wondrous place known as Sugar Land, Texas.

We arrive at our destination - the modern day coliseum known as Smart Financial Centre. We wanted to have a Fanilow Tailgate Party but the Centre’s office told us tailgating was banned last year after some rowdy Dave Mathews Band fans had started throwing chairs in the parking lot. Bad DMBers. We just lift the back hatch and chew on some of Jackie’s cheese and crackers to build up our stamina for the concert of a lifetime. Our hearts beat a little faster. We are this much closer to actually experiencing Barry.

The excitement grows as the new best friends and our boas clear security. Tickets are scanned as ushers hand us giant green glow sticks. This is going to be the BEST…NIGHT…EVER! 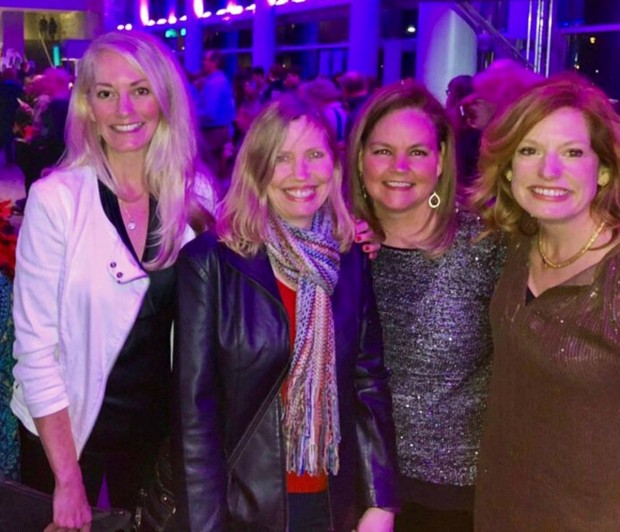 More proof of this promising to be a wild night is when we run into West University Methodist Church choir director, Lynne Jackson. We start screaming deliriously. Lynne’s husband looks relieved when we discover the chattering church ladies are sitting in a different section. Before we part a Hand Bell Ringers and Chapel Choir singers’ reunion picture is snapped! (Yes, our church ladies’ motto is “We pray hard and we play hard...”)

Locating our seats, we bow to the superior Fanilows in our section who each wear a giant alphabet letter on the front of their shirt to spell out “Barry!” Yes, they included an exclamation point shirt . . . sometimes it is good to be the sixth wheel. We vow to make similar t-shirts for the next concert we attend and just hope that band’s name won’t be too long.

The venue goes dark. Everyone holds their breath. Suddenly a few simple notes clink on a piano. The spotlight comes up and, sure enough, there is the one, the only, beaming from ear-to-ear Barry Manilow sitting at his piano playing one of his you-can’t-help-but-sing-along hits.  I must confess I can’t remember which song he opened with as I was too excited. In fact I’m not sure if he was at the piano or standing. Or maybe he was playing a tuba or a steel drum?  In fact, I’m not sure it was Barry Manilow. Actually, that part I’m sure of.

My friend waves some smelling salts under my nose and yells “Jump! Shout! Knock yourself out! Because a boogie-woogie beat is what I’m talking about.” As I rise, one of the t-shirt alpha-babes (I think it was the letter Y) gives me an encouraging thumbs-up. 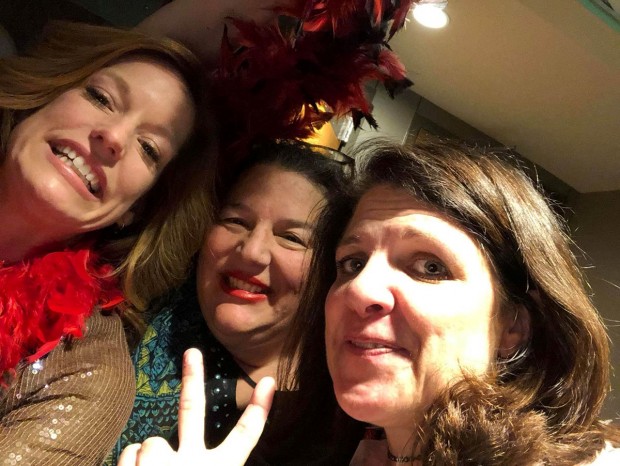 The excitement kept growing as these friends got closer to their seats. (From left) Amanda Dearborn, Karen Vine Fuller, Stasie Smith.

Mandy, Could It Be Magic, It’s a Miracle! The Old Songs. The hits keep coming. The audience enthusiastically wave their neon green glow sticks to the beat. We’re guessing there must be some metronome-loving piano teachers in the crowd.

We scream until our throats ache. In the back of our minds, we visualize Lynne, our choir director, giving us the stink eye for straining our vocal chords too much. But we throw all caution to the wind. The man sitting next to us pushes his earplugs in a little further.

Hearing the ’70s icon’s familiar, melodious voice transforms us back to our first Barry Manilow album or ’45 record that we listened to over and over again on our record players. We remember listening to Casey Kasem’s American Top 40 radio show on Saturdays. And calling the request line at our local AM or FM station to ask the DJ to play a Manilow hit and then patiently waiting (sometimes hours) by the radio to hear it.

If only back in 1978 my 12-year-old-self could have looked into a crystal ball and seen that my future adult life included experiencing a Barry Manilow concert, I would have counted that as me living happily ever after!

During Can’t Smile Without You, my seatmate, Amanda Dearborn, leans over to text her childhood friend, Teri Messenger Hayburn, to let her know she was thinking of all the times they listened to that song in their bedrooms when they were growing up in Bowie, Maryland.

Barry gives a baby grand piano to a boy in the audience who lost his during Harvey. The Manilow Music Project (MMP) presents flooded Kingwood High School’s band with much-needed, gently used musical instruments collected through MMP donations. We clap. We smile. We wipe tears from our eyes. Barry is still a swell guy.

Mr. Manilow keeps singing. Song after song, another tune you have forgotten or didn’t realize you knew. Google them. Listen to the first line of the melody and lyrics. If you are over 45 years old, the songs will come back to you. They are imprinted on your brain. I Made It Through the Rain, It Could be Daybreak, Weekend in New England. You forget how many hits he had.

Finally the moment I’d dreamt of my entire life arrives. Yes, Barry’s grand finale. He was about to play my go-to karaoke song. The one. The only. COPA . . . COPACABANA!  And so it begins…

“She was a show girl“ . . . an ocean of florescent sticks freestyling funky Fanilow frolicking footwork.

“With yellow feathers in her hair and a dress cut down to there.” Even the earplug man is standing up . . . probably plotting his quick escape to the parking lot.

“She would merengue and do the cha-cha.”

True confession. Copacabana is one of the only songs to which I know all the correct lyrics. So I feel it’s my time to sing with wild abandonment. I will apologize to Amanda later when my yelliest pep rally voice is the only audio on her Copa video footage.

The lights come up and all 74-awesome-years-young of Barry Manilow waves and disappears behind the descending curtain. The Fabulous Fanilows beam at each other! What a great concert!

We politely scooch back to let earplug man and his wife out of our row first. The parking lot is definitely calling their name. We wave goodbye to the alpha-babes who in their post-Barry buzz now spell out Y-R-!-B-R-A

Boas still flowing, we blow kisses to our Ubering sidekicks and parade back to the Manilow Uber. We laugh, realizing we still don’t know each other’s names even though we have been hugging and screaming simultaneously all night. We take turns introducing ourselves. We agree that it has been one of those magically memorable nights and with a group of strangers, no less.

Tonight we weren’t defined as moms, sisters, daughters, singles, partners, employees, volunteers, flood survivors, neighbors, inner loopers, outer loopers, vegetarians, bon-bon eaters, or anything else. For a few hours we were solely our fabulous Fanilow selves indulging our awesome teenage selves. We air toast imaginary champagne glasses to Jackie for bringing us together and vow to have our boas and sparkly attire standing by for a Fanilow reunion in the near future.

The Muber (Manilow/Mom Uber) is happily standing by, ready for the next adventure. Just keep in mind that like Cinderella’s coach turning back into a pumpkin, the Muber occasionally returns to being a family SUV.  The morning after the Barry concert my accountant husband loaded his briefcase and discovered the seat covered in boas! He texted friends a picture with the caption “Look what the Fanilows left behind.”

Muber passengers are always welcome as long as they are ready to wear a boa (don’t worry, we have extras) and belt out the lyrics to Copacabana at the top of their lungs. “At the Copa, Copacabana! The hottest spot north of Havana…”