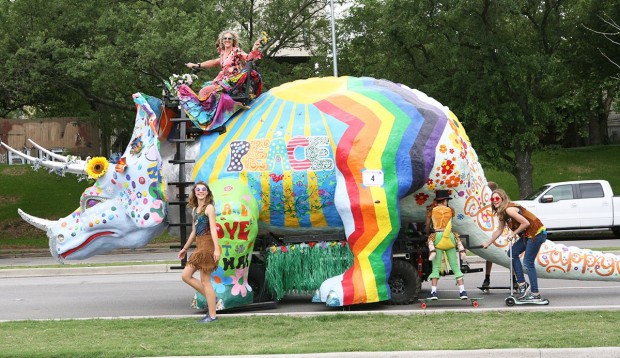 The Waters family had attended the iconic Houston Art Car Parade for many years, watching the creative and unique cars and motorized creatures roll along city streets. This year, they decided to create their own.

In August, they “rescued” a more than 2,000 pound fiberglass triceratops from a junkyard, where she had lived for about 30 years; the creature had been part of a California theme park in the 1960s. At the time, she had trees growing around and inside her and was in poor shape. The Waters family craned her out of the junkyard and started creating their plan, a “labor of love,” as Gerry Waters described.

The evolution truly began over Thanksgiving break. “There was a lot of painting, and a lot of brilliant engineering to get her mobile!” said Gerry. The work – designed and built by Lou and Gerry, Sacha, Thali and Luke Waters - largely was done over Thanksgiving and the December holiday break, plus any long weekends before the parade weekend.

“Hippysaurus” took to Allen Parkway for the 31st Annual Art Car Parade last weekend. Lou Waters drove and the rest of the group took turns dancing next to the colorful triceratops or sitting on top. The family was joined by friends Oliver Crantz, Walker Hipps, Abraham Touchet, Thomas Goodgame and Sam Touchet.

The Waters family was surprised but excited that Hippysaurus won the honor of Mayor’s Cup. Gerry said they had “the most fabulous time, creating and parading our car.” Hippysaurus will make an appearance at the first Saturday Cars in the Park event at Evelyn’s Park on May 5, so stop by to see this colorful creation in person.