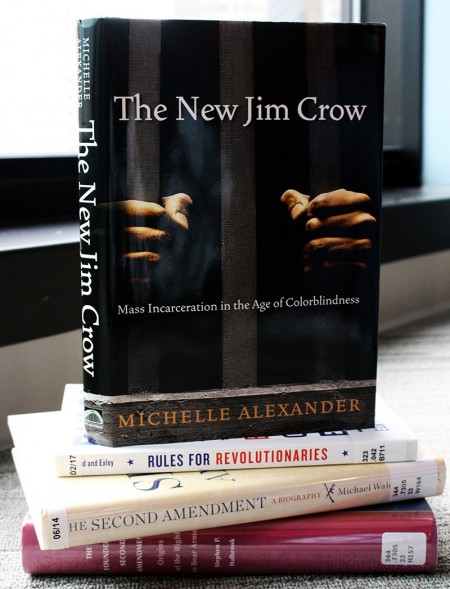 Carrie Robinson from Houston Public Library shares a list of books examining some of the most pressing issues of our time.

But we will only succeed if we reject the growing pressure to retreat into cynicism and hopelessness… We have a moral obligation to “stay woke,” take a stand and be active; challenging injustices and racism in our communities and fighting hatred and discrimination wherever it rises.

aware of and actively attentive to important facts and issues (especially issues of racial and social justice).

In the wake of one of the deadliest school shootings in American history, students from Marjorie Stoneman Douglas High School - and, indeed, all over the United States – are rising up. We at the Houston Public Library are inspired by their courage, their action, and their determination to ensure no more children die of gun violence in America. And so, we present this literary guide to staying “woke” in 2018. Tune in to the most pressing issues of our time with these hard-hitting books examining race, gender, culture, class and beyond.

The New Jim Crow: Mass Incarceration in the Age of Colorblindness by Michelle Alexander

Once in a great while a book comes along that changes the way we see the world and helps to fuel a nationwide social movement. The New Jim Crow is such a book. With dazzling candor, legal scholar Michelle Alexander argues that “we have not ended racial caste in America; we have merely redesigned it.” By targeting black men through the War on Drugs and decimating communities of color, the U.S. criminal justice system functions as a contemporary system of racial control – relegating millions to a permanent second-class status – even as it formally adheres to the principle of colorblindness. In the words of Benjamin Todd Jealous, president and CEO of the NAACP, this book is a “call to action.”

Rules for Revolutionaries: How Big Organizing Could Change Everything by Becky Bond

Rules for Revolutionaries is a bold challenge to the political establishment and the “rules” that govern campaign strategy. It tells the story of a breakthrough experiment conducted on the fringes of the Bernie Sanders presidential campaign: a technology-driven team empowered volunteers to build and manage the infrastructure to make seventy-five million calls, launch eight million text messages, and hold more than one-hundred thousand public meetings – in an effort to put Bernie Sanders’ insurgent campaign over the top. Bond and Exley, digital iconoclasts who have been reshaping the way politics is practiced in America for two decades, have identified twenty-two rules of “Big Organizing” that can be used to drive social change movements of any kind. And they tell the inside story of one of the most amazing grassroots political campaigns ever run. Fast-paced, provocative, and profound, Rules for Revolutionaries stands as a liberating challenge to the low expectations and small thinking that dominates too many advocacy, non-profit, and campaigning organizations – and points the way forward to a future where political revolution is truly possible.

The Second Amendment: A Biography by Michael Waldman

By the president of the prestigious Brennan Center for Justice at NYU School of Law, the life story of the most controversial, volatile, misunderstood provision of the Bill of Rights. At a time of renewed debate over guns in America, what does the Second Amendment mean? Waldman recounts the raucous public debate that has surrounded the amendment from its inception to the present. In The Second Amendment: A Biography, Michael Waldman shows that our view of the amendment is set, at each stage, not by a pristine constitutional text, but by push and pull, the rough and tumble of political advocacy and public agitation.