Everything Old Is New Again 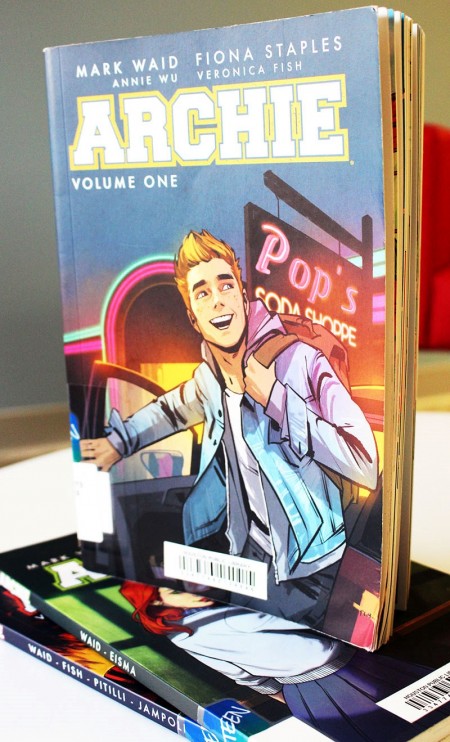 Carrie Robinson from Houston Public Library shines a light on reboots, remakes and revivals, such as the New Riverdale franchise based on the original Archie comic book series.

It’s often said that we are in the era of “Peak TV,” a phrase used to describe the creative explosion of prestige television shows on traditional TV networks, previously obscure cable channels, premium channels and, of course, streaming platforms. But watching the premiere of Riverdale, the highly-stylized, gritty TV adaptation of the Archie franchise that some (not me, but some) have called downright Lynchian, it occurred to me that we are also in the era of Peak Reboot. Over the last five years, numerous re-imaginings, remakes and revivals have been brought to screen or page. Some are relatively faithful, while others fall into the “in name only” category. Whence comes this cultural rewind? Did we really need more stories from the Tanner family? (I mean, I binge-watched both seasons of Fuller House, but with a heart full of shame.)

Here, I present to you a roadmap through the realm of literary reboots: the good, the weird, and the nobody-asked-for-this.

New Riverdale - And why not start with the series that inspired this blog post? Archie Comics’ New Riverdale franchise launched in 2015 with Archie: The New Riverdale*. Written and illustrated by comics heavy-hitters Mark Waid of Kingdom Come fame and Fiona Staples from the Greatest Graphic Novel Series of All Time (according to me) Saga, Archie sets the Riverdale gang in a firmly 21st century setting. Gone is Archie Andrews’ cross-hatched hair and bizarre hollow freckles, replaced by a guitar and a faux-messy fade.

Don’t worry, though: he’s still torn between Veronica and Betty. And Jughead is still wearing a crown, for whatever reason (he is the king of the hamburgers or something?). New Riverdale was soon expanded and now includes Jughead*, Betty & Veronica*, Josie and the Pussycats*, and Reggie and Me*. Upcoming titles include Big Moose and a tie-in with the new CW TV series, Riverdale.

Hag-seed by Margaret Atwood is the latest in the Hogarth Shakespeare series and is a re-telling of the Tempest. This audacious project launched in 2015 with Jeanette Winterson’s The Gap of Time, an updated version of The Winter’s Tale. Some titles are relatively faithful to the Bard’s source material (Winterson’s contribution, Anne Tyler’s Vinegar Girl) while others play more to the spirit than the letter of the play (Hag-seed, Shylock is My Name* by Howard Jacobson) - but none disappoint. These authors do justice to the greatest author in the Western canon. Readers should check out the reboot of Othello: New Boy by Tracy Chevalier.

What story is more important, more compelling, more salient than the story we weave about past events? Alternate histories, in some ways, are the most important reboots, a wishful mirror, a longing for a past that never was...

...Ok, perhaps that's a stretch, but My Lady Jane by authorial trio Cynthia Hand, Brodi Ashton and Jodi Meadows is one of the best, weirdest, most unique YA novels I’ve read (not completely the weirdest, though, an honor that goes to Hot Pterodactyl Boyfriend by Alan Cumyn, which is about exactly what it sounds like). Set in the turbulent years at the tail-end of the Tudor era, My Lady Jane follows the hijinks of “Nine Day Queen” Lady Jane Grey, Edward VI and Lord Guildford Duley as they navigate court politics, intrigue, backstabbing, love and loss. It's The Princess Bride meets The Other Boleyn Girl.

Oh, and also there are shapeshifters.

Up next: Jane Eyre, Serial Killer. For those of us who read Jane Eyre in 9th grade and spent the next year gazing profoundly out the window every time a cloud graced the sky (no? just me?), the premise of this novel inspires an unpleasant mix of rage and revulsion. And yet, somehow, the novel just works. Jane Eyre was already a dark novel to begin with; Jane Steele takes it to the furthest possible level. This Jane is no quietly suffering Victorian heroine, getting repeatedly punched in the face by tragedy; fans of the original novel will find enormous satisfaction that Jane finally gets to enact revenge on her persecutors.

Just because nobody asked for it, doesn’t mean nobody should read it. In fact, I heartily encourage everyone to check out Prez, which was one of my favorite reboots last year. What’s that? You haven’t heard of the original Prez: First Teen President, the obscure 1970s comic featuring the misadventures of Teenager-In-Chief Prez Rickard? Neither has anyone else.

In the hospital, a giant, robotic end-of-life (read: euthanasia) bear named Carl offers narcotics, followed by swift death, for those who can’t pay their hospital bills. In the zoo, a happy polar bear points the way to Tropical Arctical Global Warming Village, and a tiny child looks sadly out from behind bars in the Little Honduras section. It’s a bleak future in America 2036 and Beth Ross, AKA viral video star Corndog Girl, has just been elected president via Twitter. The faceless corporate avatars who literally run Congress have abolished all age restrictions on the office of the President - corporate personhood, run amok. But they get something more than they bargained for with Beth, who isn’t beholden to any donors or constituency. With the help of some trusted advisers, she’s determined put an end to the rampant commodification of human life. Sadly, Prez was halted after only six issues, but you won't regret reading it.

I bet last Christmas you thought to yourself, as I did, “Santa Claus is great! If only he were a little bit more like Conan the Barbarian.” Well, fret no more! Klaus is here to save the day. Despite the fact that we were all pretty satisfied with the Santa Claus we know and love, writer Grant Morrison and artist Dan Mora deliver the goods. Teutonic Vigilante Klaus fights a greedy toy-hoarding aristocracy, in order to spread Yuletime cheer to the children of Grimsvig. Despite the heavily shamanic overtones and the appearance of Santa’s Scandinavian child-eating nemesis Krampus, who shows up for some (child-eating) hijinks, Klaus is surprisingly tame . . . at least, as tame as you’d want it to be.

By turns witty, harrowing, and heart-warming, Klaus is a romp that answers the question you never asked: What does Santa Claus do the other 364 days of the year?