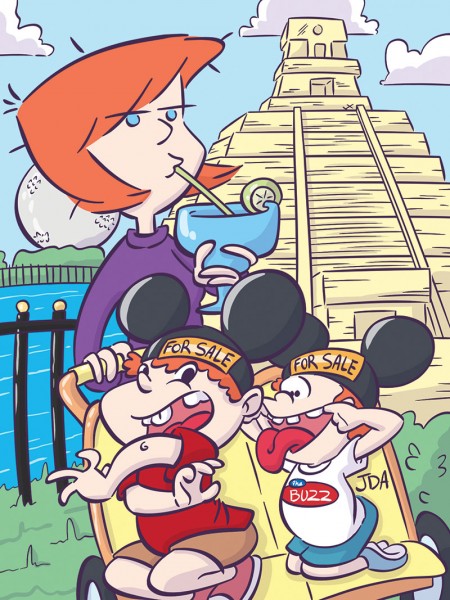 WE’RE ONLY HUMAN With kids, you never know when you'll get pushed into the zone of parenting lows. (Photo: behance.net/runamokstudios)

There’s no shortage of low parenting moments. According to my 15-year-old daughter, my lows are tied. It’s between the time she told me she couldn’t see, and I said, “Oh, just blink a few times, you’re fine,” and six months later we found out she really couldn’t see (making things worse, my dad, her grandfather, is an ophthalmologist), and the time she told me she had bed bugs, and I said, “Oh, there’s no way you have bed bugs,” and two weeks later we got the bed bug diagnosis (see the August 2017 Back Porch, Airing our dirty laundry).

But I think the lowest one ever in the history of my family is one that my sister calls “the one we do not talk about.” She doesn’t talk about it because she’s the mom. But I’m the aunt, and I was there. And also my mom, the grandmother, was there. Along with seven more of us. So really and truly, we all were culpable. Short version: We left my 10-year-old nephew in a bookstore in another town in Maine and didn’t realize he wasn’t with us until 30 minutes later, outside of that town, when we got a call from the bookstore lady wondering if she should give my nephew some cookies while he waited for his whole family, who forgot him, to come back. It’s one of those laugh-until-you-hurt things, and also a sore spot for my nephew that’s not going away anytime soon. Maybe never.

So while the world is getting ready to celebrate moms and dads, I thought it might be fun to ask people about their not-so-successful moments. Of course everyone asked for anonymity but still fessed up – because none of us can claim to be June Cleaver.

“When [my son] was around 6 years old, we took [him and his sister] to Cheesecake Factory. He ordered taquitos, and upon their arrival, he noted they were lightly decorated with sour cream. He refused to take even a bite. I was exasperated by that time and finally said, ‘I’m going to stick them up your a**.’ End of discussion.” – Physician and father of two twenty-somethings

“Hands down, my worst moment was when I ran over my kindergarten-aged daughter’s finger with an ice skate while trying to teach her how to skate. Blood everywhere on the Galleria ice rink. Then a trip to the pediatrician to reassure me so that I could stop crying. There’s a scar on her finger, 14 years later.” – Physician and mother of two teenagers

“We ran out of gas on the highway. It was really cold, and a policeman stopped because I put the three little kids on top of a hill to get them out of the way while [my husband] dealt with the gas. Of course [my middle son] had on shorts. First the policeman was checking to be sure the kids weren’t abandoned, and then he realized they weren’t and started giving me grief because my child was wearing shorts. I really was on my way to get them sweaters out of the car while they were on the hill, I promise.” – Oil executive and mom of three

“The other day I told my kids the only reason I had teenagers in the house was so they could carry things. I actually said it.” – Mom of two teens and one tween

“We did tell [our son] that Chuck E. Cheese was only open for birthday parties. We still feel guilty for out-and-out lying to him, but we just couldn’t handle the place.” – Parents of two teenagers

“We were at Disney, and I’ve had it, because we’ve done It’s a Small World so many times I just wanted to rip those things out of the wall. So we’re finally at Epcot, and I’m so happy because not only do they have different countries, they have margaritas in Mexico, Chianti in Italy. So we have one of those strollers where the kids are both in it – they’re 4 and 7 – and they start fighting and pushing each other and being a nightmare, so I started yelling, ‘Be quiet!’ But my best moment was yelling, ‘Children for sale, fresh children for sale,’ with my margarita in the cup holder walking through the park. And I was so happy, because I meant it.” – Mother of a high school and a college senior