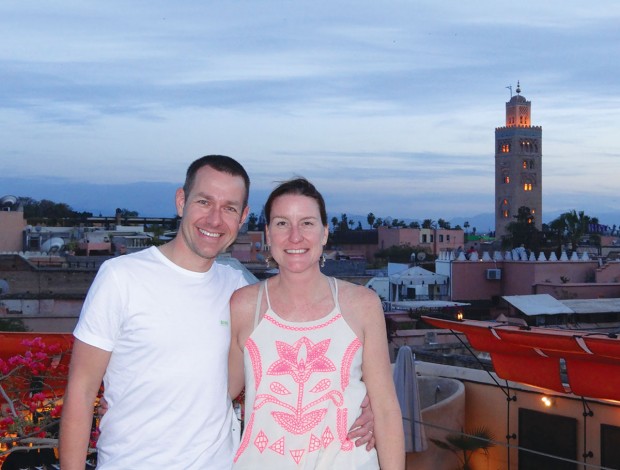 Al Vickers and Starlee Sykes enjoy a sunset from the top of their riad in Marrakech.

Perhaps nowhere on the planet does East meet West, and North meet South, in a more exquisite and thoroughly enchanting fusion.

It mesmerizes in a thousand ways as one explores: wandering among the ancient souks and bargaining with merchants, marveling at the intricacies of Moorish architecture, savoring a bowl of slow-cooked tagine (a regional stew) or slowing down for reflection as the azan, or call to prayer, rises over the city. Or out in the countryside, as one begins to comprehend the astonishing diversity of this small country, approximately the size of California: Atlantic and Mediterranean coasts, snow-capped peaks, lush forests and patchwork farmlands, and the vast golden expanse of the Sahara Desert.

And then there’s the history, which may, according to a recent archaeological discovery in the region, date back more than 300,000 years, culminating in a rich cultural blend that includes influences from the indigenous Berber people, Arabs, West Africans and Europeans.

Here, we connect with three Buzz families who made recent journeys to Morocco.

A place of hidden things

Alistair Vickers and Starlee Sykes (or Al and Star, as their friends call them) are a globally inspired couple if there ever was one. Both were from humble backgrounds – Alistair from small-town England, Starlee from Texas  – and never set foot on an airplane until they were young adults. They’ve spent the intervening years making up for it. Alistair, now vice-president of operations at British Petroleum, has been to more than 82 countries, and Star, regional president for Canada and Mexico, isn’t far behind at 63. And none has captured their imaginations quite like Morocco.

This time around, they spent four days in Marrakech, doing a bit of reconnaissance for an upcoming trip with sons Jack (13), Cade (8), and Ethan (6 months). But that four days was enough to whet their appetites for much more.

“It’s kind of a place of hidden things, Marrakech,” said Alistair. “I like the fact that to really find out what’s going on you have to kind of look around a little bit, peek around corners, look down alleyways – not everything is as it appears.”

Their first big surprise was behind the doors of their riad. In Morocco, the best choice in housing, according to the Vickers and all our other interviewees, is not a hotel; it’s a riad – a grand traditional home turned into a bed-and-breakfast type establishment.

“It’s like you drive up to a door on a wall and you open it – and there’s a magnificent thing inside,” said Marty Aaron, who toured the country with his extended family over the holidays. “There’ll be swimming pools, mosaics, fountains, gardens, glass roofs, restaurants, all kinds of things. And breakfast is always included.” 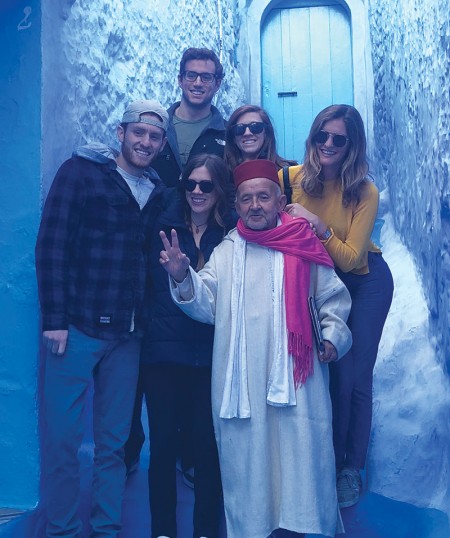 Will Blumrosen, Haley Aaron, Margo Aaron and Kelli Blumrosen (from left) and Brian Platt (in back) found time to pose for the camera in the "Blue City" of Chefchaouen with their most delightful and “colorful” local guide.

Real estate developer Marty Aaron and wife Dorit, daughters Margo and Haley, and sister-in-law Tali Blumrosen along with husband Eric and their kids, Kelli and Will, were among a dozen or so family members who toured the country over the holidays and were as enchanted by it as were the Vickers.

Their itinerary reads like an exotic movie script, beginning in Casablanca and moving onto Tangier near the Strait of Gibraltar; on to the Blue City of Chefchaouen, and then the cultural capital of Fez. They took an epic journey on the Road of a Thousand Kasbahs, a route traversed since ancient times by sultans and traders, over the Atlas Mountains to the Sahara Desert, where they rode on dromedaries and spent the night in the desert, waking to an unforgettable sunrise.

Having Dorit and Tali, who are Israeli, as part of the family had already given Marty and indeed the whole family a window into the Middle Eastern world. But Morocco, a progressive Muslim country, gave them a different perspective.

The call to prayer was a little surprising the first time they heard it, but they soon grew accustomed, as it would sound five times a day, beginning at 5 a.m.

“They enjoyed their religion without appearing fanatical,” said Marty. “They never said a word about how we were dressed or anything else; they were very accepting. I felt very safe and very included; people wanted to share their life and world with us. It was culturally very meaningful.”

The country was “phenomenal,” he added. “The people are great, the food is wonderful, the culture is amazing and deep. They have been in that neck of the woods for eons … those kasbahs were from 700 AD, and some people are still kind of living that way.”

For Tali, the highlights included glamping in the Sahara Desert, four-wheel riding through the dunes and a cooking class in Fez – “where we not only went to the souk for our ingredients, but caught our chickens and had them slaughtered in the market. That was definitely a first for all of us.”

Among a host of other adventures, the family visited a tannery and indulged in a hammam (a Middle Eastern steam bath, traditional ancestor to the modern-day spa), visited a mosaic art colony, played with the monkeys in the Atlas Mountains, visited the Hassan II Mosque in Casablanca, with the world’s tallest minaret. They stayed in some amazing riads along the way, including the stunning blue-themed Lina Ryad in Chefchaouen, and a kasbah as well. Tali highly recommended their in-country guide, Kamal Oujaâ from Medina Travel ([email protected]).

“Morocco is a special place, especially Chefchaouen, the Blue City, with all its mysticism,” said Tali. “While Marrakech gets all the PR and is now known as a golf mecca for Europeans, I believe Chefchaouen should not be missed!” 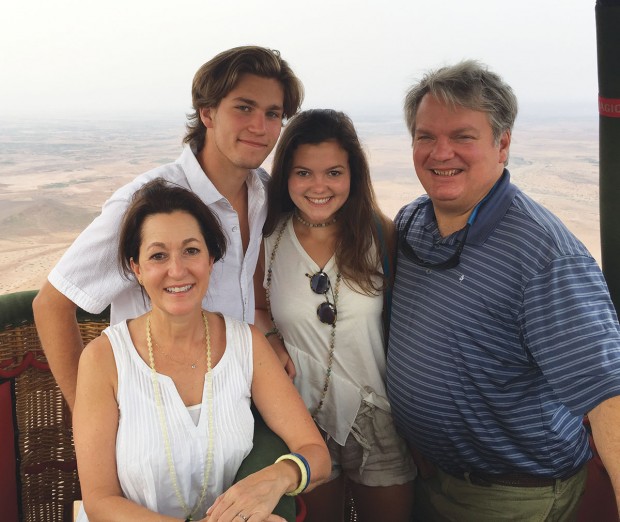 Leah, Ian, Ellie and Steve Ragiel get a view of the Moroccan desert from the basket of a hot air balloon.

Last year, Leah and Steve Ragiel decided the time was right for a family adventure in Morocco. Ellie, a junior at Episcopal High School, was studying abroad in the south of Spain, and Ian was a junior at Strake Jesuit College Preparatory School. The family wanted to take a good trip before the kids go to college, Leah said, and with Ellie in Andalucia, “we knew we were in striking distance to Morocco, and it’s a place I’d always wanted to go.”

To give them an insider’s edge, they decided to hire Houston-based trip planner and Morocco expert Cristina Buaas and a local driver and guide. They began in Marrakech with an intense immersion into local culture at the main square, Djemaa El Fna, with its snake charmers, pet monkeys, women doing henna, the sounds of flutes and oriental drumming floating through the air. At night, the plaza transforms into an open-air food market, with the light and smoke from dozens of cooking fires mingling with the offerings of local musicians.

Their four days in Marrakech they stayed at an enchanting riad, Villa des Orangers, and wandered many times through the ancient souk, the traditional old-town market. They admired the wares from dollar-store offerings to high-end handcrafted jewelry and décor, bargaining for treasured keepsakes, as is the custom, and wandering the hidden courtyards.

Their third day they paid a visit to Yves St. Laurent’s Majorelle Gardens, which houses a museum of traditional Berber dress, a source of endless inspiration for the native Algerian. They closed the day with an excursion to the Agafay Desert, where they enjoyed a tented dinner, capped off with a brilliant desert sunset.

Their next foray would be to the coastal city of Essaouira, where much of Game of Thrones was filmed. Before leaving Marrakech they took a hot air balloon ride – “so cool but a little bit freaky,” as Ellie described the experience – and then a more down-to-earth Moroccan cooking class.

Essaouira was an encounter with nature and an even deeper dive into the culture, with an invitation to have dinner in the traditional home of their guide, with the whole family. A windblown camel ride on the beach was followed with a visit with an artisan who crafted each of their names in Arabic.

Their last two nights were spent up in the Atlas Mountains at Sir Richard Branson’s Hôtel Kasbah Tamadot, with day trips hiking into Berber villages. The Kasbah is a North African term for a citadel, the central part of an old walled city. This one had fallen into disrepair, and Branson had bought and restored it and turned it into a boutique hotel.

Morocco clearly left its mark on all of our travelers. For the Vickers, the country seemed the perfect place to share with their children.

“It helps you understand there’s way more than the U.S. to think about,” said Star. “Morocco is a good bridge to see the rest of the world; it’s open to western tourists but has a bit of Eastern Africa to it – and that bridge is actually quite helpful. We like to take our kids to places that are safe and fun and enriching but equally a little bit edgy as well…. It’s about our kids knowing the world is not scary – because it really isn’t.” 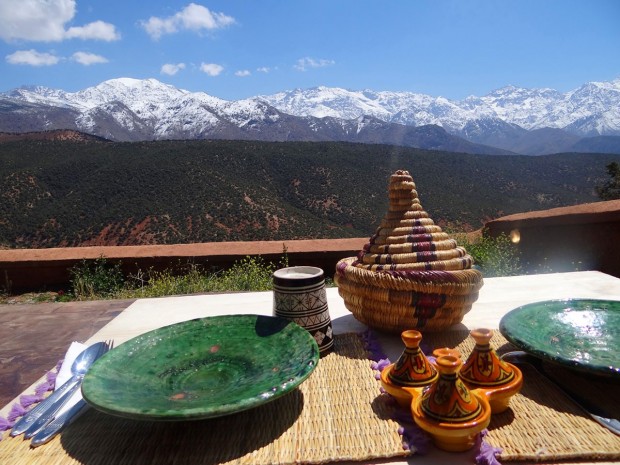 A traditional lunch in the Atlas Mountains. (Photo: Alistair Vickers) 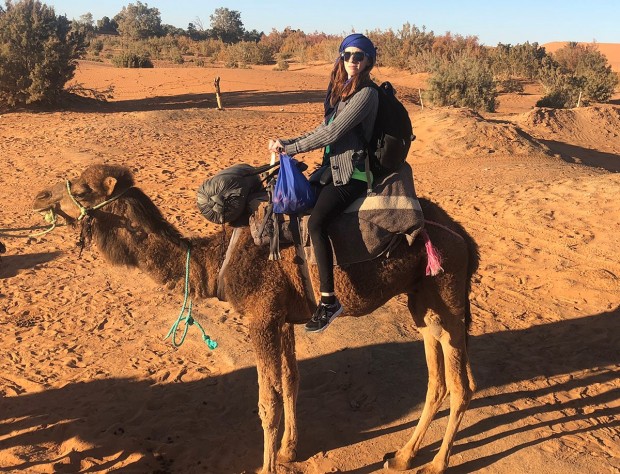 Margo Aaron heads to camp in the Sahara Desert on a dromedary. 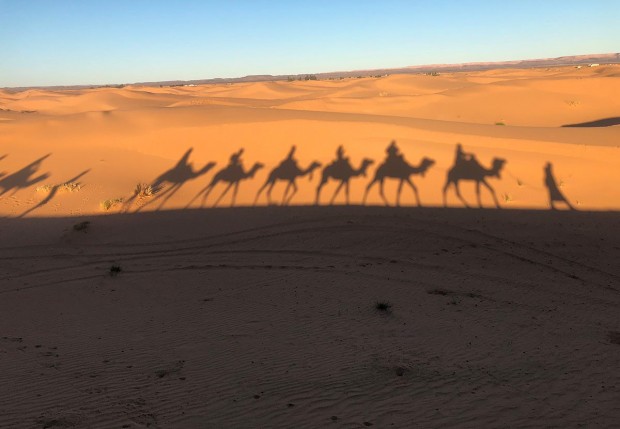 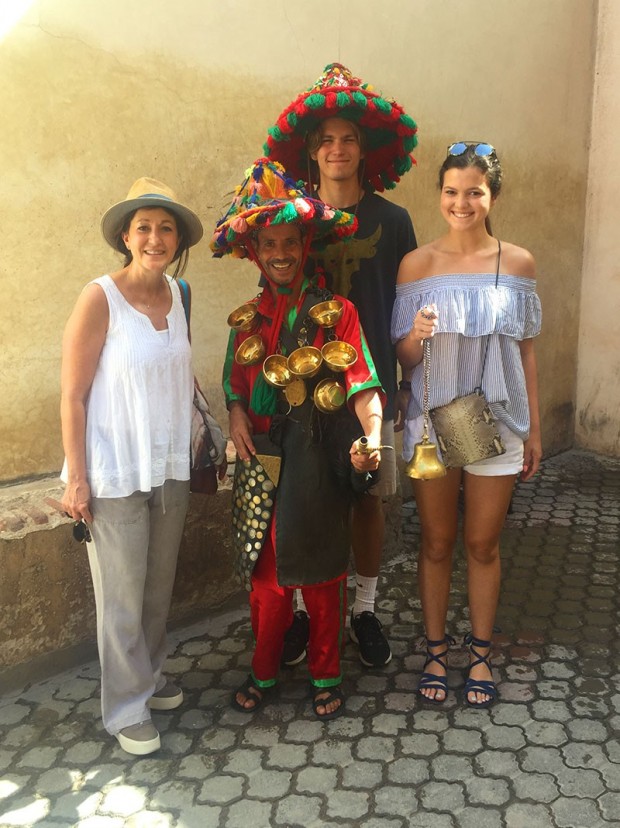 Leah, Ian and Ellie Ragiel pose with a traditional water vendor in the old Kasbah of Marrakech.

(All day)
Location:
The Plaza at Sugar Land Town Square