Exploring 'Death by Natural Causes' and 'Sherlock' at HMNS 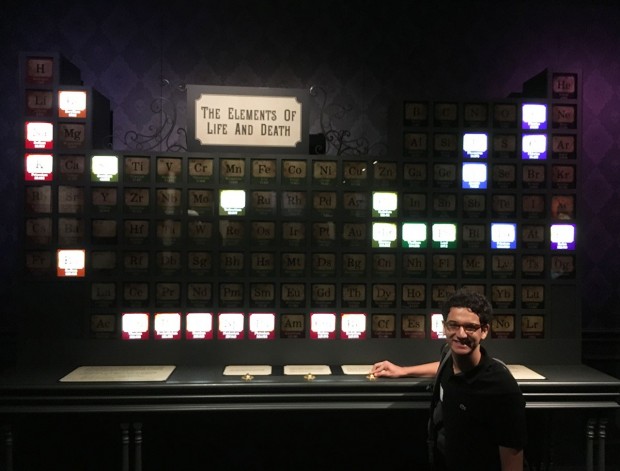 Buzz intern Eli Maierson highlights all of the elements that are lethal to humans. (Photo: Ryan Chang)

Buzz interns Eli Maierson and Ryan Chang went to the Houston Museum of Natural Science to check out the “Death by Natural Causes” and “International Exhibition of Sherlock Holmes” exhibits.

Death: Pictures and portraits of the deceased glared at us as we entered the Houston Museum of Natural Sciences’ temporary exhibit on “Death by Natural Causes”. Upon closer inspection, each person in the photos had died in an unusual way. Marie Curie went from radiation poisoning. Bandō Mitsugorō VIII, who claimed to be immune to tetrodotoxin, passed on eating four poisonous fugu fish livers. Joao Maria de Souza perished when a cow fell through his roof and crushed him. These morbid and unusual facts revealed that this exhibit was going to be like no other at HMNS. 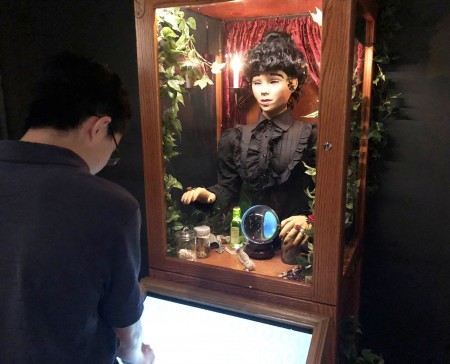 Buzz intern Ryan Chang takes his chances with the electronic fortune teller to discover how much longer he will live. Luckily, he has 67 years left. (Photo: Eli Maierson)

As we continued through the exhibit, the thrills never stopped. Some highlights included the costume of a plague doctor (who would help victims of the bubonic plague), an electronic fortune teller who tells patrons how much longer they have to live and plenty of unlikely death scenarios. Dangerous animals littered the hall, each with their own unique way of harming humans. Our trip through the “Death by Natural Causes” exhibit was a distinctly macabre experience that we will not soon forget. This exhibit is open through Sept. 4.

Sherlock: Tattered papers and books lay strewn on the floor, while a bust of Napoleon Bonaparte had shattered into several places. Multi-colored vials of mysterious liquid adorned the shelves, but the most attention-grabbing part of the International Exhibition of Sherlock Holmes was the gaunt, pale-faced “man” twitching in his chair. We examined the faux crime scene for clues, hoping to solve the mysterious “murder.” 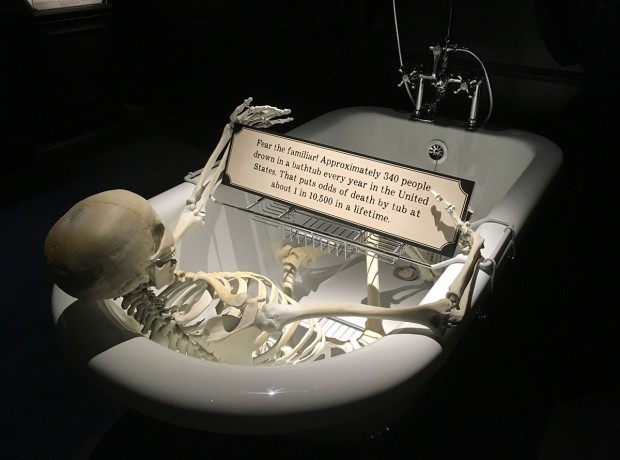 The exhibit explores Sherlock’s fictional crime-solving techniques, created by Arthur Conan Doyle, and how they influenced modern police and forensics work. It features many period artifacts and set pieces, such as a Victorian household or slaughterhouse. The main feature of the exhibit, however, was an elaborate mystery that museum visitors can solve using various clues and interactive stations.

Eli Maierson: "The best section of the “Death” exhibit, in my opinion, was the area devoted to poisonous plants. A miniature greenhouse housed these dangerous fauna, encompassing everything from the Calla Lily to Daffodils. Many of these worrisome plants were also common in American households, which both terrified and fascinated me." 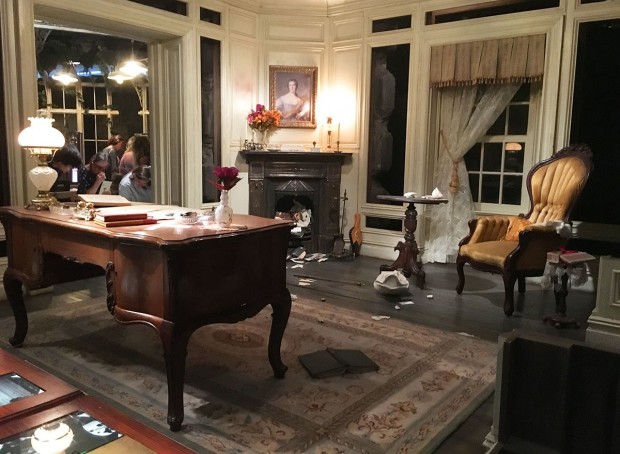 Ryan Chang: "My favorite part from the two exhibits was the interactive murder mystery from the International Exhibition of Sherlock Holmes. When we entered the exhibit, the usher handed us each a notebook, in which we recorded our observations from the “crime scene” and solved puzzles. The faux crime scene boasted incredible detail, and the dim lighting helped immerse me in the experience. Although Eli and I are terrible detectives, I appreciated how the exhibit allowed visitors to use the crime-solving skills presented earlier in the exhibit to solve the fake murder later on." 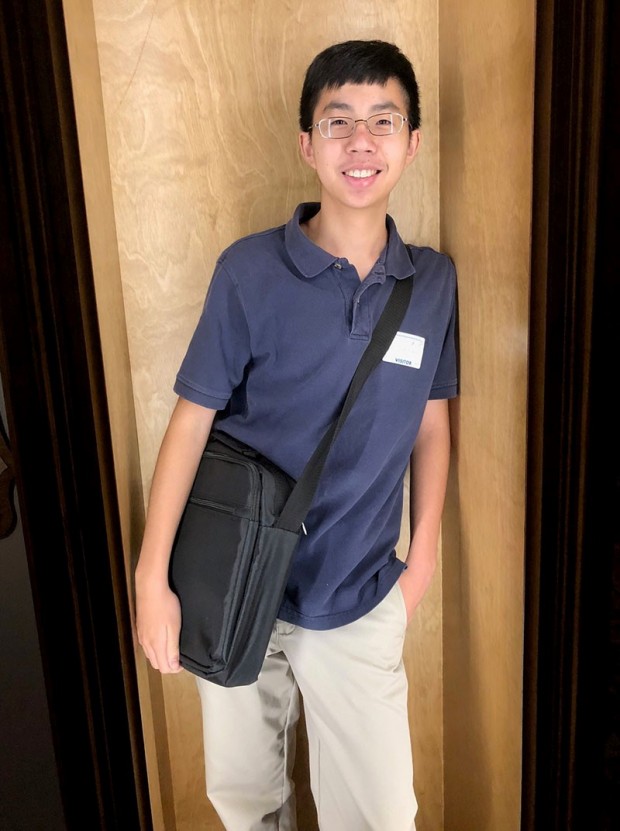 Buzz intern Ryan Chang joins the museum’s collection as the newest addition to the Cabinet of Curiosities. (Photo: Eli Maierson) 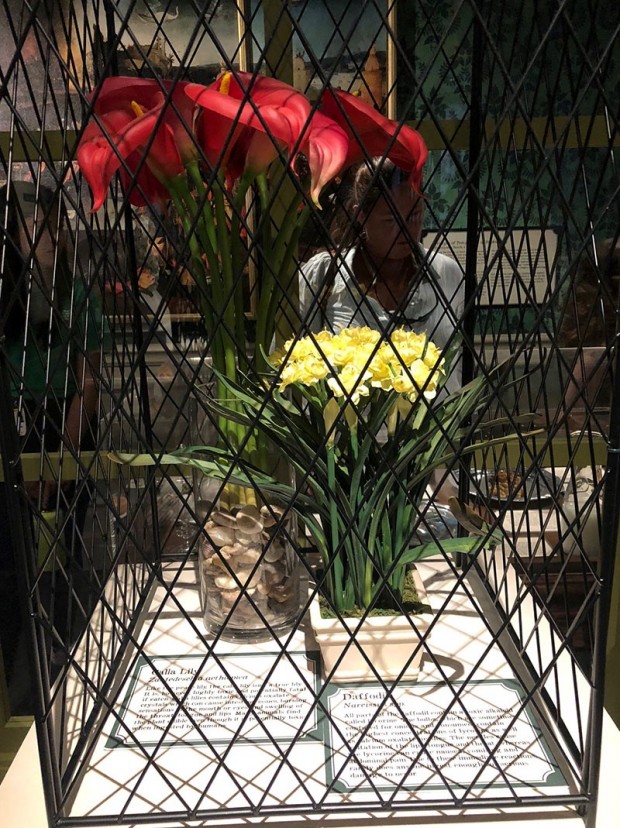 The Calla Lily and daffodils join the long list of poisonous plants on display in the “Death by Natural Causes” exhibit. (Photo: Eli Maierson)