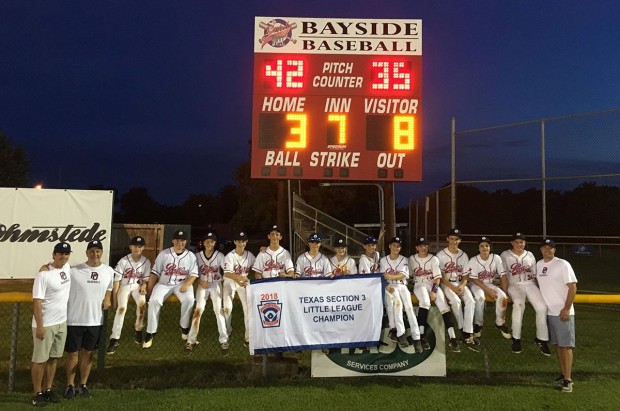 Back in 2016, the Post Oak Little League 10U All Stars won the Texas East District 16 and Section 3 Championships, and ultimately went on to bring home Texas East State Championship in Tyler. Prior to that, the 11-year-old team won the state championship in 2008 and then again in 2013.

Team manager David Rook said, “Our biggest challenge will be to stay rested and focused on winning the current at bat, current inning and current game. The competition at State Tournament is tough, with great baseball played throughout Texas, but we have experienced it as 10 [year-olds] and are well prepared.”

The next goal for the team of 13 players all around the age of 12-years-old along with their coaches is to win the Texas East State Tournament in Tyler, Texas which starts on Saturday, July 14 at 8 p.m. and runs through July 18. The tournament is not televised, but the bracket will be updated as the games are underway.

Following that, the team hopes to win the Texas East State Championship and be the first Post Oak Little League 12U All Stars to do so. If they continue on their winning streak, the team will head to Waco, Texas for the Southwest Region game on Aug. 1. Ultimately, the team hopes to go all the way and make it to the Little League World Series, which starts on Aug. 16 in Williamsport, Pennsylvania.

Those interested in watching the SW Region game should check local listings on ESPN and/or LHN. Additionally, check here for updates on televised viewings of the Little League World Series.

Rook has a lot to be proud of with a team of young boys that have achieved so much already. He explained that he is most proud of the fact that the boys have each other’s backs. “They pick up one another on and off the field. They rebound from mistakes. They love each other and spend most of every day together either on the field at practice or off the field in the swimming pool, at the movies or playing video games in the AC,” he said.

Everyone here at The Buzz is sending our well-wishes to Post Oak Little League as they advance on!