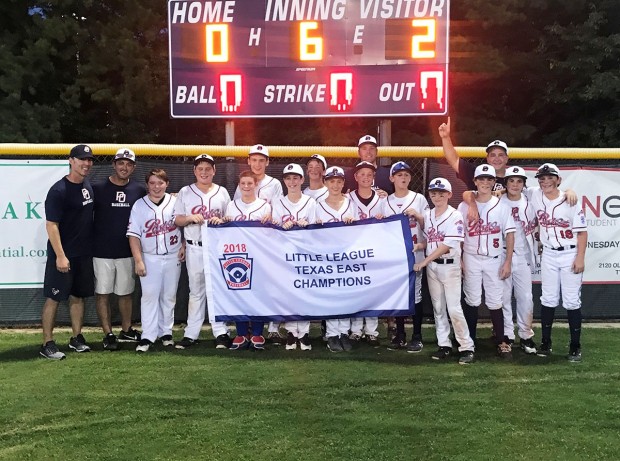 The Post Oak Little League 12U All Stars are headed to the Southwest Regional Tournament after winning the Texas East State Championship. In a nail-biting game against Port Neches Groves Little League in Tyler, Texas, the POLL 12U All Stars pulled off a 2-0 victory.

Last week, the POLL 12U All Stars defeated the Pearland East All Stars in an 8-3 victory at the Bayside Little League complex.

Team manager David Rook noted that this team has been preparing for this for some time. “On one hand, the boys have been preparing for this summer and the opportunity to win the Little League World Series for three years. While winning sectionals is a huge deal, our goal is to win the LLWS. On the other hand, this team is 71-4-1 in the last 3 years, and 2 of those losses were at the hands of Pearland last summer in sectionals. That stung, but it motivated all of us,” he said.

Tama Klosek, whose son Richie is on the team, said, “Amazing series. We did not lose a game!” Richie hit a two-run home run, allowing Richie and Ryan Selvaggi to score, ultimately winning the game for the POLL 12U All Stars. Klosek said Kaleb Rook and Carter Pitts did an “outstanding” job at pitching and kept Port Neches from scoring.

The Post Oak Little League is now headed to Waco, Texas for the Southwest Regional Tournament, which begins on Aug. 1. If the POLL 12U All Stars win there, they will then head to Williamsport, Pennsylvania for the Little League World Series, which begins Aug. 16.

Check your local listings on ESPN and LHN for information on televised games from the Southwest Regional Tournament. Check here for updates on the Little League World Series.

We’re rooting for the Post Oak Little League 12U All Stars as they continue on their journey to the Little League World Series. Good luck!