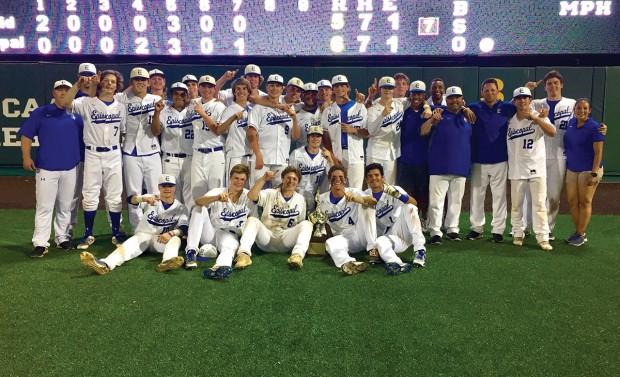 In a truly dramatic SPC Championship final, the Episcopal Knights scored in their last at bat to defeat the rival Kinkaid Falcons 6-5 in the title game.

Knights senior Jack Grams raced home from second base with the winning run off the base hit to left field by sophomore Tanner Witt as the Knights stormed the field for a memorable celebration. “Once Tanner hit that ball, there was no way I was going to hold up at third base,” said Grams. “I was so confident in Tanner and the rest of this team that we were going to get this win. It’s really an indescribable victory.”

“It was just an amazing game to be a part of and also to watch,” said Knights head coach Matt Fox. “Kinkaid is tough, and the game could’ve gone either way. I’m just proud of the way our guys battled and stayed focused. It was a special night.”

Among those leading the Knights all season long was senior pitcher and Texas Longhorn commit Peter Geib. “Peter is one of the best players we’ve ever had here at Episcopal,” said Fox. “He’s really irreplaceable.” In addition, Fox had high praise for senior second baseman Hunter Megarity. “Hunter’s the epitome of grit and determination. He’s one of the best leaders we’ve ever had in our program.” 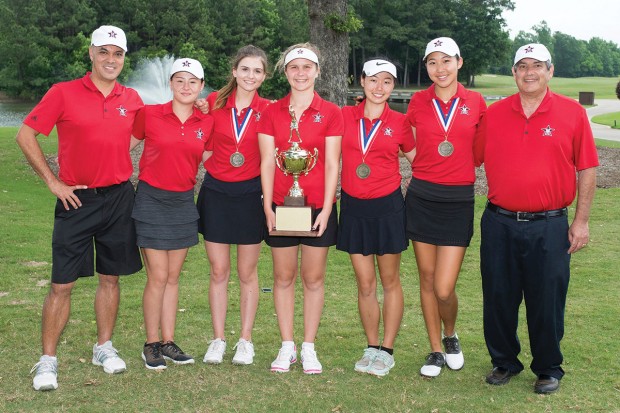 Led by the dynamic duo of sophomores Christine Wang and Denise Pan, the St. John’s Mavericks won their second straight SPC Girls Golf Championship. For her part, Wang also won the individual SPC Championship with a 1-under par, 141, over the 36 holes. Pan was second individually, finishing three strokes back with a 2-over par score for the two rounds. “Christine is one of the top-rated girls golfers in the region, and Denise is right there within reach. They’re both great players,” said Mavericks golf coach Jack Soliman.

In addition, Mavericks junior May McCabe finished fifth individually to earn All-SPC honors, and senior Morgan Sholeen was the fourth top scorer for the Mavericks as St. John’s rolled to a lofty 45-stroke victory. “We had a lot of solid depth on this team,” said Soliman. “The girls worked on their short game in the off-season and played really well in a big tournament against some of the large UIL 6A schools. Facing that really good competition was a great experience for us.”

In the UIL 6A state golf tournament, Stratford Spartans junior Matthew Riedel captured the individual state championship with a spectacular 9-under par score over the two rounds of play at the Legacy Hills Golf Course in Georgetown. Riedel’s second-round, 5-under par included a sensational score of 32-over the final nine holes. “I played that back nine on the final day as well I possibly could have,” said Riedel. “To come out and beat such a great group of golfers was a huge confidence boost for me. It was also an unreal experience the following week to get all the congratulations from my classmates and across the Stratford community.”

“Matthew works harder than any athlete I’ve encountered at fine tuning his game,” said Spartans golf coach Ryan Cozad. “I saw him go to an all new level competitively over the 36 holes of the state tournament. Matthew was laser focused, and that run on the final back nine was amazing.” 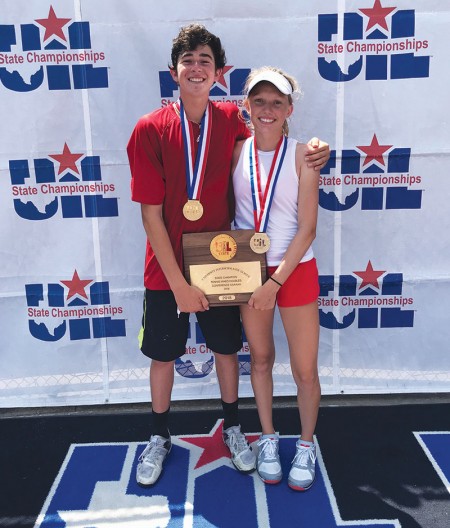 In tennis, the Memorial Mustangs tandem of senior Andrew Esses and freshmen Drew Morris captured the UIL 6A Mixed Doubles Championship, capping off an undefeated 26-0 season for the duo. “They had a truly amazing year,” said Memorial tennis coach Bud Booth. In the state final, Esses and Morris defeated a duo from Lake Travis high school in a memorable three set match. “After Andrew and Drew dropped the second set, Andrew came over and told me that this was going to be his last set of high school tennis, and we were going to win this thing. Drew also played amazing, and she’s just a freshman.”

In addition, Mustangs freshman Aleksandra Dimitrijevic advanced to the state semifinals in girls singles before falling to the ultimate state champion, while Memorial’s boys duo of Ben Westick and Artur Zigman also advanced to the state semifinals. In all, it was a memorable year for Memorial, with the Mustangs having won the 6A Team Tennis State Championship last fall.