Head for the Hills

From water to watering hole 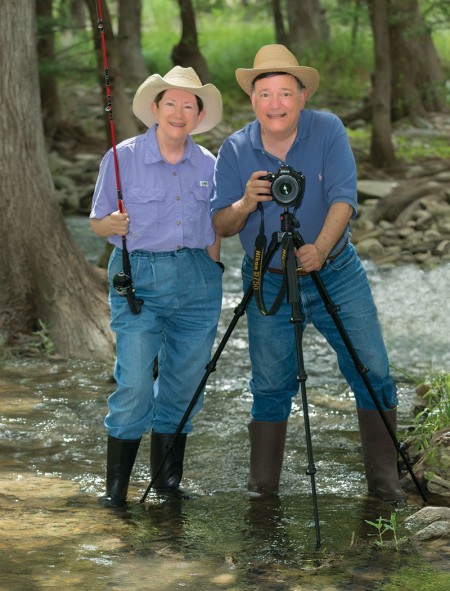 Mike, a photographer, and Mickey Marvins spend summers at their place near the Guadalupe River. Here, they are in their backyard. (Photo: Alan Montgomery)

When the mercury begins to rise in Houston, thoughts begin drifting toward the hills – and not just because of the fresh breezes and cooler temperatures. As documentary photographer and author Mike Marvins puts it, the Texas Hill Country is more water than hills – and what better way to cool down a sizzling summer than in the cerulean spring-fed waters of the Frio, the Guadalupe, the Medina, Canyon Lake, or a score of other rivers and lakes that run through the region.

Those waters have been the salvation and inspiration of many a Houston refugee over the decades – but none more prolific than Cary Robinson, author of The Dudley Files. For years Robinson has escaped on the weekends to his Medina River retreat, where you’ll find him cooling his heels and gazing out at the massive rock that fell off the hill into the middle of the river sometime in the 1950s and has stood there defiantly ever since. It’s a symbol, perhaps, of the spirit of Dudley, the loyal rescue dog who inspired a series of dog comedy mystery novels that have been Robinson’s true labor of love. Those novels have raised a steady stream of income over the years to support several animal shelters and rescue groups.

“Two of my fondest memories are when my rescue Boxer, who didn't know how to swim, jumped in the river, swam out to a drowning German Shepherd puppy, and swam him back to shore on her back to save him,” he recalls. “And when my neighbors who live up on the hill baptized their child in the river. As the sun was going down the hill began to change colors, as it always does, and they all sang together, Amazing Grace. It echoed off of the hills and was just a beautiful moment. It was the most spiritual thing I have ever experienced out there.”

Robinson’s buddy Kenneth Lewis has a place down the road near Kerrville, and the two of them plan many an escape on the Medina River, together or alone or with their families. Kenneth and his wife, Carla Diaz-Lewis, like to stop in at the Medina River Company (MRC) on Main Street in Bandera, which will pack kayaks on a trailer and take them a few miles west to drop them in the river.

“We then spend the next few hours coasting, talking, laughing and, occasionally, putting a paddle in the water,” Kenneth says. “The cypress trees along the banks provide welcome shade from the Hill Country sun. Often, we pull over to the banks to partake in rope swings from the trees, swim in quiet pools in the river, or just to sit in the shallows and relax.”

Once they reach the park in town, MRC picks them up and takes them back to their shop. They then cap off the experience with lunch at O.S.T. – which stands for the Old Spanish Trail, a route proposed in 1915 throughout the South that never quite came to be, but it did inspire the opening of this vintage restaurant in 1921. With its saddle bar stools and John Wayne Room, it has inspired generations of urban cowboys – like “Texas Bob,” who writes in his blog Texas Bob Eats: “If Bandera, Texas is the Cowboy Capital of the world then the Old Spanish Trail (OST) Restaurant in Bandera has to be the cowboy restaurant of the world.”

T Hoovestol and David Klutts are another pair of friends from way back who have followed the siren’s call of the Hill Country waters. One of their favorite places is Pedernales Falls State Park, where they bike on the trails and then cool off at the river.

“The big limestone boulders that make up the falls are beautiful and can change dramatically based on the amount of rain,” said T. “They alone are worth going and sitting down and watching the flow or the rapids, and taking your dogs down to play in the water. There is camping, lots of great hiking trails, great bike trails, and horseback riding as well as the ‘Secret’ Twin Falls.”

The Klutts family likes to cruise the 160-mile shoreline of Lake Travis from Mansfield Dam to the dam at Marble Falls for calm waters, gorgeous vistas and amazing sunsets, while dipping in the aqua green waters of the Colorado River.

“We have traded University Boulevard in for the Colorado River at Lake Travis,” David wrote. “Both are wonderful locations, but we prefer the one with less traffic.”

T, who recently relocated permanently in Dripping Springs with his partner Liz after years as a West U resident, says the area is becoming known as the Brewery Capital of Texas, as well as part of the Texas Hill Country Wine Trail. Every Sunday night great local musicians gather at The Barber Shop Bar on Mercer Street, the central business area of Dripping Springs. “It’s a great pickers’ circle and jam.”

From water to watering hole, the Hill Country never fails to refresh. 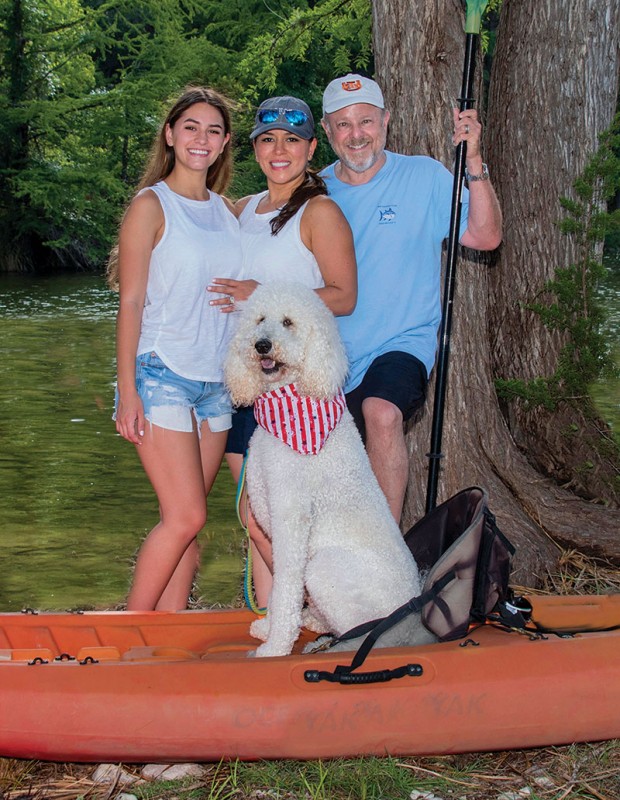 COOL Ken Lewis, Carla Díaz-Lewis, daughter Alexis Díaz-Waterman and Tito have a place near Kerrville and like to escape to the Medina River.(Photo: mikemarvins.com) 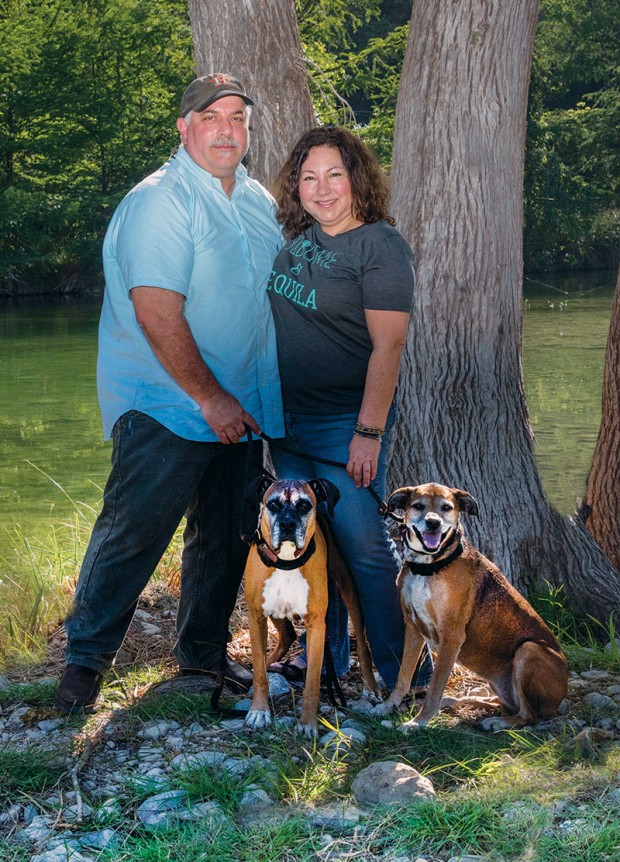 Cary and Karen Robinson cool off in the Medina River just a few feet from their vacation home, where Cary writes The Dudley Files. (Photo: mikemarvins.com) 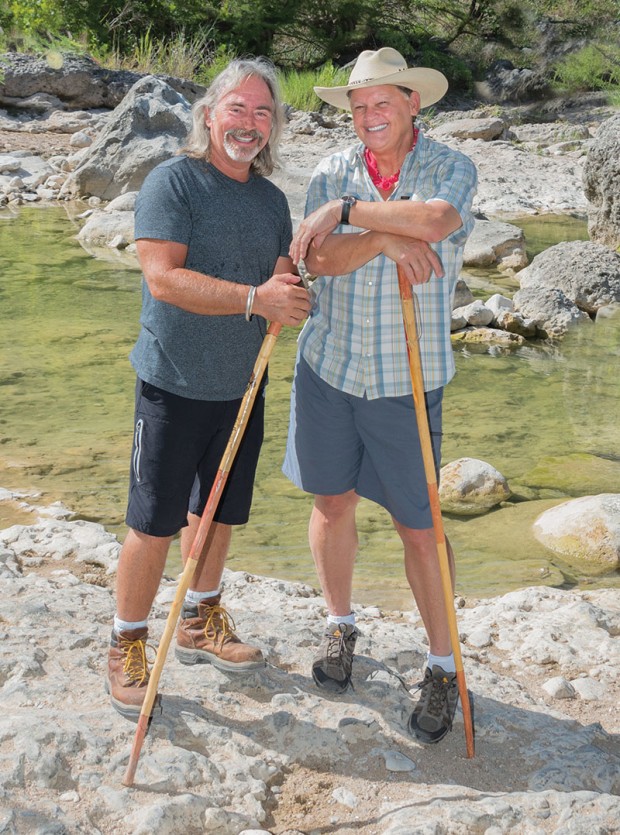 CHILLED OUT Longtime travel buddies T Hoovestol and David Klutts love to go biking in Pedernales Falls State Park and then cool off in the river. (Photo: mikemarvins.com)