A year after the flooding 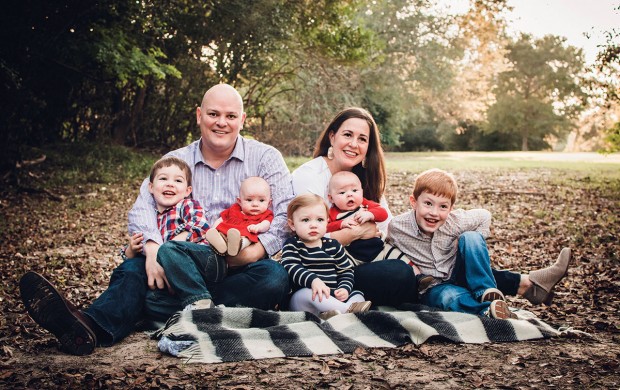 ONE YEAR LATER Lindsey and Ben Bowman and their children – twins Brooke and Benjamin, 1; Katherine, 2; Connor, 3; and Kaleb, 5 – were evacuated from their home at 5 a.m. by rescue volunteers during Hurricane Harvey. (Photo: Sadie Cakes Photography)

Hurricane Harvey didn’t care if you had 6-week-old twins at home, or if you were overdue with your second baby. It didn’t care if it brought 5 feet of water into your home at 5 a.m., or whether you had flood insurance.

But neighbors, emergency responders and even complete strangers cared. They cared about people like the Bowmans, who were evacuated out of their home by boat early in the morning with five children under the age of 4, three adults and two dogs.

Lindsey Lenig Bowman, a former high school teacher, and her husband, Ben Bowman, a territory manager for a cyber-security company, had welcomed twins on July 13, 2017. Their oldest child, Kaleb, was 4 when Harvey hit, followed by Connor, 2, Katherine, 1, and the twins, Brooke and Benjamin.

They lived in the quiet Memorial-area neighborhood of Whispering Oaks, where Lindsey, a Memorial High School grad, grew up. No one expected what happened during Hurricane Harvey to happen in their neighborhood.

At 1 in the morning on Sunday, Lindsey was awake doing what most parents of new twin babies are doing, feeding them. Ben had been out of the house, surveying the area to assess the potential risks that were looming in the minds of so many in Houston last August.

Ben came in to tell Lindsey the news – water was rising near their home, quickly. It was time to take action.

Lindsey woke up her sleeping mother, Rita Lenig, who was in town from Cresson, Texas, helping out with the twins. The three adults scrambled, packing a large cooler full of anything they could grab, and moved the children upstairs. They packed clothes, diapers and formula. The three older children settled into their parents’ bed to watch a show on the iPad, unaware of the danger surrounding them. The cartoons kept them distracted as water started seeping through the front door.

“I was still so naive that I began placing towels in the entryway to avoid water spilling over onto the wood floors,” said Lindsey. “I think Ben knew better. He had brought in a chainsaw and an axe from the garage and told me that it was necessary in the event we needed to evacuate through the roof.”

Lindsey, Ben and Rita watched the water slowly rise inside their family living room, to the staircase, then above the first stair, then second, followed by the third. It was not stopping. Lindsey called 411 and reported their situation. Within 10 minutes, volunteers who had been rescuing people since midnight arrived at the Bowman home. It was four men and one woman, dressed in life jackets. The volunteers pointed at Lindsey, Rita and the babies, and said, “You all and the babies, you go first. You have two minutes to grab what you need.” Lindsey, Rita and the volunteers took the babies in their car seats.

Lindsey grabbed her backpack and started lifting up one of the twins. “I remember them telling me, ‘No, we will carry the babies out for you,’” she said. They followed their orders and started carefully walking down the stairs.

Through tears, Lindsey says she remembers begging them to make sure they returned for her other three babies and husband. “That was the hardest part. My three older ones couldn’t swim,” she said.

While heading down the stairs, the volunteer who was holding Brooke tripped and fell into the water, accidentally dunking Brooke's car seat. “Thankfully, there was another volunteer down at the bottom to help him up almost immediately, but Brooke's car seat and her clothes were wet. Ben said I looked up at him at this point, and all of the color had drained from my face and I looked terrified.”

Before boarding the small rescue boat, Lindsey caught a glimpse of her family’s home. “I'll never forget the shock of walking down the stairs, and looking around the corner into the living room,” she said. “All of our stuff was floating in dark, murky water. Just 12 hours prior we were playing in the playroom and sitting on the couch, and now everything was floating aimlessly through the house.”

The rescuers returned 15 minutes later for Ben, the three children and Rita’s two small dogs. The family was reunited at the Bunker Hill City Hall. The children, excited by the adventure, danced on the steps of the city hall in the drizzling rain. Three hours later, the family was taken to a shelter at Memorial Drive Presbyterian Church, where they stayed for four days.

Almost five feet of water stayed in their home for 12 days. On day 13 and for days after that, volunteers showed up to help them remediate the house and salvage anything they could. Their neighborhood filled with volunteers from all over to help residents. “We had so many friends calling, texting and messaging to come help clean out our house – people I hadn't seen in years and others I had only briefly known,” said Lindsey. “The entire process was very emotional; little things would set me off. For example, school was about to start for my boys, and the thought that we had lost their backpacks and lunchboxes made me break down.” The family did not have flood insurance.

Today, almost a year later, the Bowmans, continue to regain momentum after Harvey. In July, they celebrated the twins’ first birthday, and construction is about to start on rebuilding their new home on the same lot. 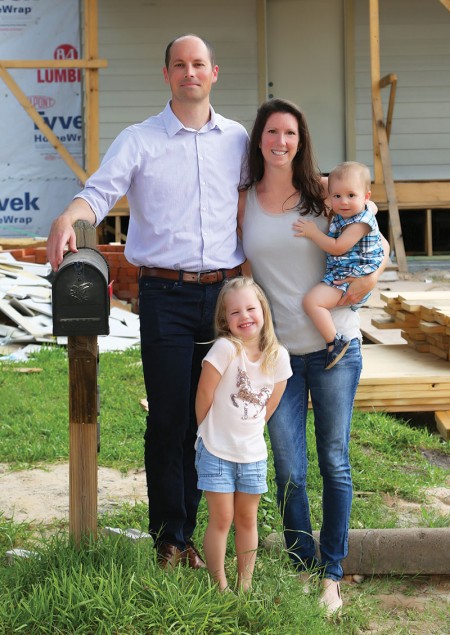 Sara and Daniel Murphy, with son Miles and daughter Morgan, are rebuilding their home after it flooded during Hurricane Harvey in August 2017. (Photo: lawellphoto.com)

Sara Schoenfield Murphy, a commercial construction photographer, and her husband, Daniel, who manages a battery company, were expecting their second child, a baby boy, in August 2017. Their daughter Morgan was 2 at the time, so Daniel’s mother, Sharon Murphy, traveled in from Canada with a friend to help out.

The couple, who lived in Nottingham Forest VIII, and neighbors were not overly concerned during Harvey, as the neighborhood had never flooded before. To be on the safe side, Sara and Daniel booked a hotel room at The Westin Houston, Memorial City, which connects to Memorial Hermann Memorial City where Sara had been planning to deliver. “There were a bunch of pregnant women walking around The Westin,” said Sara, laughing. Sharon and her friend Wendy stayed at the Murphy home to take care of Morgan.

The course of events changed when Harris County Flood Control District made a live public televised announcement that the reservoirs would be released. Sara and Daniel helplessly watched through tears from their hotel room, unable to leave and get home to their family.

The next morning, Sara arrived for her C-section. The baby needed to get out, and even a hurricane like Harvey was not going to change that. As they rolled her into the operating room, water rolled into her home. Her brother, Trey, who lives in a part of the neighborhood that did not flood, brought a canoe over to evacuate Morgan, Sharon and Wendy to his dry home.

Baby Miles Murphy was born on Monday, Aug. 28. As Sara was brought into post-op recovery, texts, Facebook posts and news flooded in. Their home was flooding. Sara’s blood pressure started to rise. The group texts pinged their phone: “You need to call your insurance” and “You need to call FEMA,” they read. “Neighbors were going into homes by boats and calling us, asking what they could save,” said Sara.

Sara’s blood pressure remained elevated, so they put her on a notoriously unpleasant magnesium sulfate drip through an IV. “It was awful,” she said. The doctors elected to keep her in the hospital until Friday. During that week, Daniel was able to rent an apartment at The Lofts at CityCentre apartments.

Nottingham Forest neighbors, friends and strangers rallied around the Murphy family. They collected donated baby gear, a crib, baby clothes, adult clothes, furniture and more and brought it all to the apartment to set it up.

Sara and Daniel and baby Miles patiently waited to be reunited with Morgan. “We hadn’t seen Morgan in over a week,” Sara said. They brought baby Miles to their new home at the apartment. Inside they found a picture-perfect setup where not one detail was spared or overlooked – a baby crib was made up with fresh sheets, tiny newborn clothes dangled in the closet, and Morgan even had a “princess” room all to herself. “We were crying the whole time,” said Sara. “We felt so loved and so supported.”

The family is rebuilding their lives and, like the Bowmans, will build a new home where Harvey destroyed the old one. They say they are forever thankful for the support. “It looked like we were standing strong,” said Daniel, “but it was everyone holding us up.” 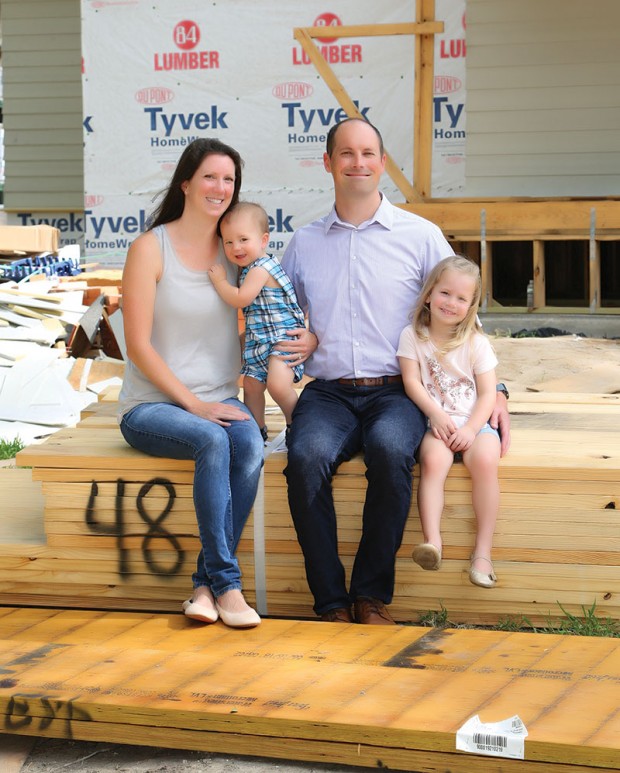 BIRTH STORY Sara and Daniel Murphy’s home flooded during Hurricane Harvey while they were at the hospital for the birth of their second child, Miles. Daughter Morgan was at their home with Daniel’s mother, Sharon Murphy. (Photo: lawellphoto.com) 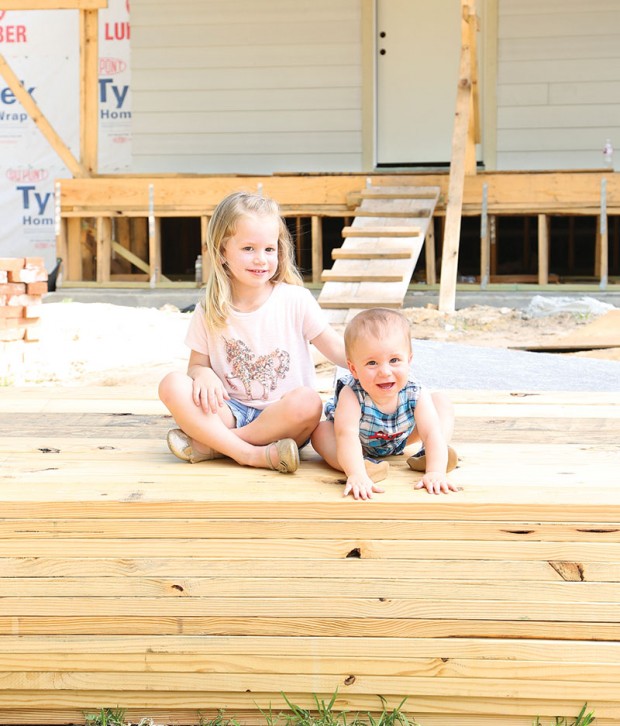 ALMOST HOME Sara and Daniel Murphy were at Memorial Hermann Memorial City for the birth of their son, Miles (pictured, with older sister Morgan), as water came into their family home during Hurricane Harvey. Their home should be ready by Thanksgiving. (Photo: lawellphoto.com)