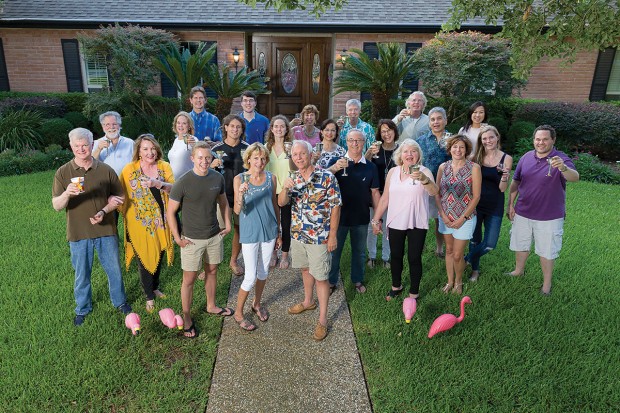 One day back in 2006, residents in the cozily nestled ranch houses of the 5300 block of Yarwell Drive in Meyerland heard a knock on their doors. Upon opening, they discovered a gentleman who appeared to be in his 80s standing straight at attention and clutching a clipboard. The mystery man introduced himself as George McDowell and explained that he had lived on the block since 1961.

He, his wife, Rae, and their two grown children, Larry and Linda, were original owners on the block. After 67 years of marriage, Rae recently had passed away. George had decided it would be nice if all of the neighbors could get to know each other better, so, he explained, he was gathering information to create a contact sheet.

At each door, he proceeded to fire off questions and take notes. In addition to the usual inquiries, name, phone number and email, he gathered additional personal information, such as college attended, major, degree and current employment.

A few weeks later, George appeared again, this time handing every house a typed copy of his “Neighborhood Security List,” with the neighbors’ contact information. He also included an invitation to a happy hour he was hosting at his house the following Friday evening. The whole family was invited. He promised good company and good conversation.

A sizable amount of neighbors came to that first Friday evening happy hour almost 12 years ago. The guests discovered that their charming host was a 92-years-young Air Force colonel, World War II veteran and a West Point alum. He attributed his longevity to his “secret nectar of the gods,” Old Fashioneds, his bourbon cocktail of choice.

He also shared a few more secrets. “Take a nap every day at 4.” “Always socialize with people younger than you.” “Stay intellectually challenged.” “Exercise every day.” “Get at least 7 hours of sleep every night.” “When leaving your doctor's office, if he doesn’t shout, ‘Whatever you're doing, keep doing it!’ get a new doctor.”

George reported that the information he had gathered about his neighbors made him happy to realize he lived on such a “highly educated” block.  There were several PhDs, doctors, lawyers, professors and master’s degrees.

The happy hour was a huge hit. New connections and friendships were forged. George’s mission was accomplished. But it didn’t end there. George proposed that they have happy hour at his house again the following Friday.  His neighbors agreed unanimously.

The weekly Yarwell Drive happy hours continued, and a tradition was born.  The first two years, all the Friday happy hours took place at George’s home. Around 6 p.m., partygoers would start drifting down the street toward George’s house, with plates of appetizers and glasses of wine in hand. The children would dash up George’s sidewalk, burst into the house, and either run out to the backyard or settle themselves in front of George’s aging television. The adults would congregate in the living room and the kitchen, sipping their beverages and talking about events of the week and the neighborhood kids’ latest accomplishments.

George’s daughter, Linda, didn’t live on the block any longer but often drove in from Bryan to join in the fun. “After Mom passed away, Dad was really lonely. Having the weekly happy hours benefited his neighbors, but it also benefited him.”

On other days of the week, neighbors became accustomed to seeing George during his “exactly at 7 p.m.” evening stroll. Carefully making his way down the center of the Yarwell Drive to avoid the sidewalk cracks caused by large oak tree roots, he would stop and talk to folks walking their dogs and watering their lawns and sometimes ring a doorbell or two just to say hello.  He visited the “old folks” on the block (all of whom were younger than he), and enjoyed the increasing number of new babies and grandbabies.

“George always insisted visitors ‘Come in and have a drink!’ with such exuberance that one could not refuse,” says longtime across-the-street neighbor Trina Fowlkes. “If you were lucky, George would relive Rae and his travels or recreate some of his WWII experiences. Those were great times and wonderful memories for us.” 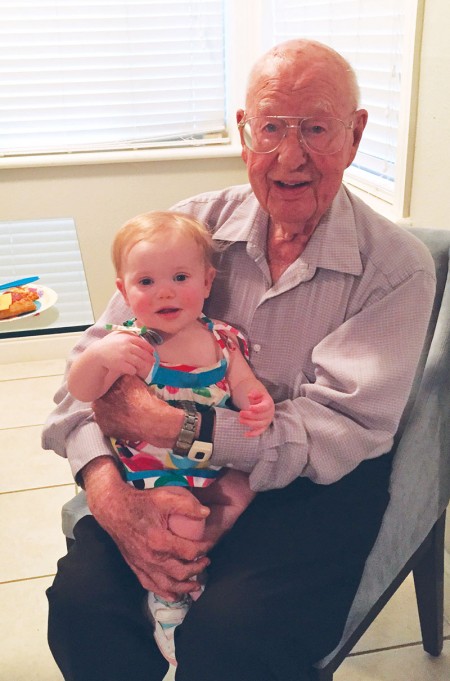 NEW (AND NOT-NEW) KIDS ON THE BLOCK In a 2015 photo, George McDowell snuggles with neighbor Ariella Keiter, who was a century younger at the time.

After a few years, the neighbors decided to rotate the happy hour gathering locations, to give George (who never allowed anyone to help him clean up) a break. This new twist also gave neighbors the opportunity to open their own homes and attempt to be as hospitable as George had been. George still took his turn in the hosting rotation and was always the “backup” if someone couldn’t host on their assigned day.

One Friday night, pink plastic flamingos mysteriously appeared in the yard of that week’s happy hour host family. A new tradition was born. From then on each week, Yarwell Drive residents knew they were in the right location when they saw flamingos waiting to join in the fun.

When George turned 95, and then 100, the Yarwell Drive neighbors enjoyed helping him celebrate at his milestone birthday parties.

“On one of his birthdays,” reminisces neighbor Alma Irr Connor, “we all pitched in and bought George dinners that were delivered throughout the year. He could go online and choose what dinners and days he wanted deliveries. It was awesome.”

Alma says she really appreciated George lending his “Santa helper” skills over the years (including some bike deliveries and storage) to help make Christmas extra special for her children, Julia and Daniel Irr.

Even though some neighbors have moved away over the years, they still come back for the Friday happy hours, and some even host at their new homes. Newly settled families are welcome with open arms, added to the Neighborhood Security List and brought up to speed on the infamous gatherings. The door is open to all, former neighbors, current neighbors and everyone’s friends.

George passed away in the spring of 2017 at 103 years old. In addition to a long list of impressive military honors, career achievements and life accomplishments, George’s obituary includes a sentence giving a nod to one of his final and lasting triumphs: “He drew his neighbors together into a close community with a weekly happy hour that continues today.”

That first Friday happy hour after George’s funeral, the 5300 block of Yarwell gathered to stir up a large batch of George’s Old Fashioneds. The neighbors shared funny stories and reflected on the fact that if George hadn’t knocked on everyone’s doors and welcomed them into his home for that first Friday night happy hour over a decade ago there was a good chance that this “like family” group of neighbors would have never met.

They had shared years of appetizer nibbling, friendship bonding, Old Fashioned sipping, life-transition supporting and everything-in-between surviving. They raised their glasses to George.

Even though it’s been a year since George’s passing, and half of the block had to relocate due to Hurricane Harvey flooding, the Yarwell Drive Friday night happy hour tradition continues. Surely from somewhere up above, George and his beloved Rae are smiling down with their cocktail glasses raised, saying, “Cheers to Yarwell Drive!”

A sugar packet
3-4 shakes of bitters
Bourbon – about 2 ounces of whatever was on hand (sometimes it wasn’t bourbon)
Add a few drops of water or any other liquid close by (sometimes apple juice, which always got a ‘yuck!’ from this recipient, sometimes Sprite or ginger ale)
Fill glass with ice.
Sit and enjoy and talk.
The drinking vessel: For special occasions – “if they were putting on the dog” – was a silver goblet Rae and he had purchased from the silver vaults in England. Otherwise, they were insulated tumblers that he kept at the ready in the dry sink behind his favorite chair situated centrally to the chairs and couches around the room.

Editor’s note: Is your street or block lucky enough to have a George McDowell? If so, we’d love to hear about him or her. Email [email protected] or leave a comment below. If you don’t have a George on your street, why not you? You don’t have to have happy hour every Friday night, but gathering information to create a contact sheet is a good way to start. Follow with a once-a-year gathering (maybe the first Tuesday in October for National Night Out), and then you never know! Better have some plastic flamingos standing by just in case.