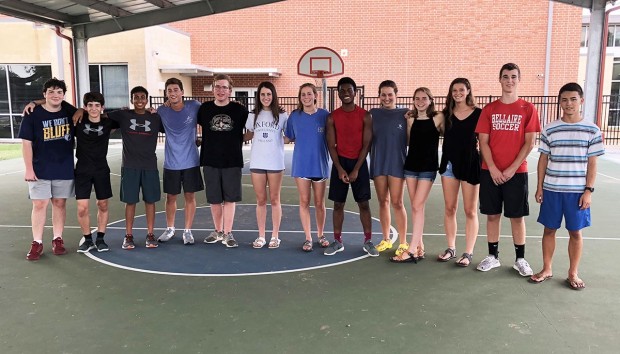 Eleven years ago, this smiling group of 16-year-olds, most of whom met as kindergarteners at Condit Elementary, were just starting to read. Now these same cute (but much taller) munchkins have just started to drive. Even though it’s been six years since they graduated from Condit and they attend different high schools with new friends, this group still loves coming back together for recess, snacks and reminiscing.

Throughout the years, the entire class of 2020 kids and their families have gathered for after-school parties on the Condit playgrounds, basketball blacktops and fields. In the old days, before the kids had email addresses and cell phones, the parents would just send out an email invitation. Nowadays the parents still send an email, but the students also help spread the word via texts and social media.

People take turns setting up a couple tables and the party is BYOC…Bring Your Own Chairs. Everyone always chips in to bring a smorgasbord of snacks, desserts and beverages.

The friends and their siblings run around and throw footballs or shoot some baskets. Parents hang out and catch up. Over the years, entertainment has included sidewalk chalk, water guns and some Mentos and Diet Coke geyser explosions. The gatherings have been a great way for the families to build friendships that have lasted through the years.

The impromptu gatherings tend to happen at the end of summer before everyone gets busy with school. It’s fascinating to see how much the kids have grown each year and catch up on everyone’s lives. Occasionally there will be a special guest appearance from former teachers, including legendary principal, Mr. Fred Bowyer.

An extra-special get-together was August 2016 before the original school building and playground were torn down. Even though it was pouring rain and the students were really too big to fit anymore, the group had a blast having one last adventure riding down the slides and climbing on the jungle gym.

The Condit playgrounds hold great memories: the under-the-fence escape hole dug every recess during kindergarten, the daily chasing-boys-chasing-girls battle, after-school snow cones, the silly string booth and coveted raffle baskets at the fall carnival, the annual Halloween costume parades (including the classic homemade costumes), the magical day playing in the snow-covered grass, the musical cookie and lemonade afterparties, sharing notes on the crazy substitutes, flag football getting banned because too many people were crying, playing with Pokémon cards, the legendary time the tough girl karate chopped the boy bully, trying out the sundials made in science class, the kickball tournaments, picking out the best treats at the bake sale, walking the track for detention during recess, Mr. Kenny coming by on his rodeo horse, Keita selling his rock collection to raise money for the Japanese tsunami victims, tossing rubber chickens and getting sprayed by the Bellaire firemen during field day and a million other things….Yes, lots of special memories.