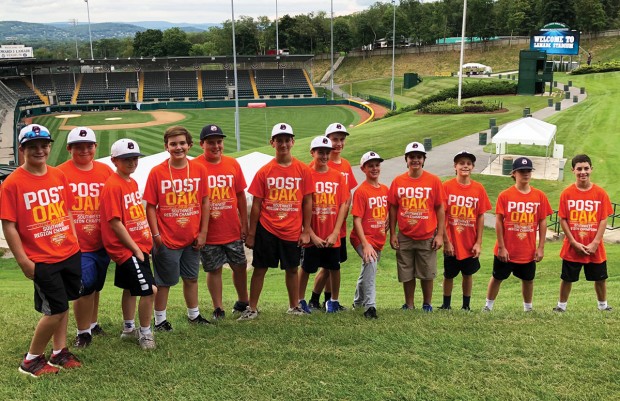 What a run! The Post Oak Little League (POLL) 12U All-Star team (pictured) made all of Houston proud with their incredible performance at the Little League World Series in Williamsport, Penn. POLL played three games at Lamade Stadium, winning the first, but losing the second and third. During the final game against the Southeast region champs from Georgia, POLL had some standout moments, but ultimately lost 7-6 in extra innings. Ryan Selvaggi had a two-run home run in the fifth inning and an additional run in the eighth. Another strong performance came from Matthew Hedrick, who scored on a triple, hit deep into right field. Before returning to Houston, the boys participated in the LLWS tradition of sliding down the upper hill at the stadium. Thanks to the recent rain, it was a perfect mud bath. The history-making players are (from left) Andy Guy, Andrew Stover, Charlie Wylie, Cade West, Justin Michealis, Richie Klosek, Ethan Goldstein, Ryan Selvaggi, Matthew Hedrick, Parrish Facciponte, Kaleb Rook, George Kugle and Carter Pitts.