For the Love of a House 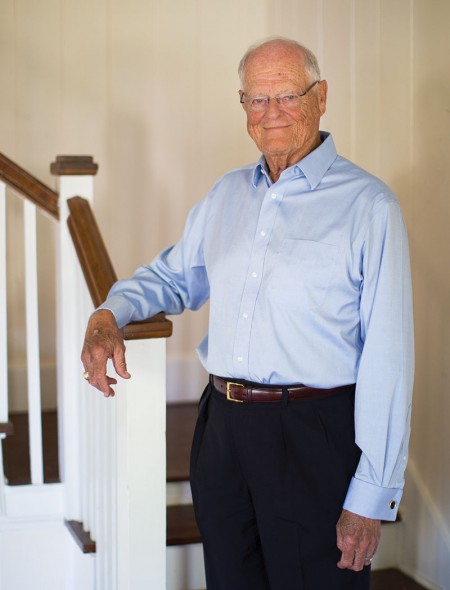 Sid Wells revisits one of his childhood home’s most memorable features, its staircase, a favorite backdrop for family pictures when he was young.

She sits on piers, this saltbox house, her sun-whipped paint dull and chipped. Inside, buckled wood floors creak underfoot as visitors mill about, reminiscing, pointing out the kitchen that once smelled of home. Crystal doorknobs sparkle against her timeworn interior like fancy buttons on a shabby coat.

“When I walk in there, it still feels like home. Yes, it’s much older, but it hasn’t changed that much,” says retired Lockheed Martin executive Sid Wells, 81, father to three, grandfather to four. He’s saying a final goodbye this day to his childhood home, hand-built by his father in 1935.

If walls could talk, they’d regale her origin as a lily-white farmhouse planted smack-dab in the middle of three acres on a dairy farm, nary a neighbor, when Bellaire was barren coastal plain. 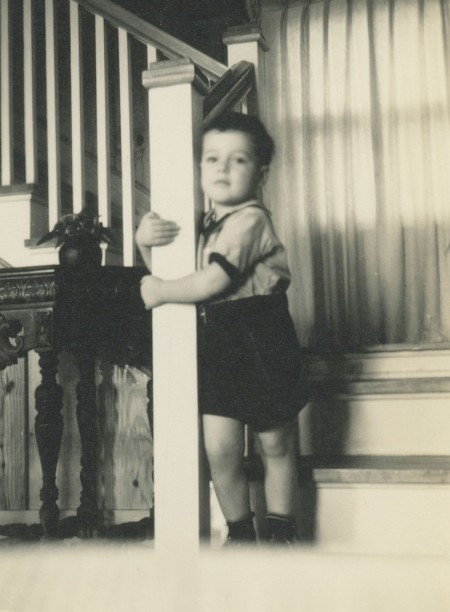 Sid Wells revisits one of his childhood home’s most memorable features, its staircase, a favorite backdrop for family pictures when he was young.

Fast-forward to the '50s, the post-war modern age. No more dairy farm. The land is subdivided, the house rolled forward 300 feet to the spot she’d hold for more than six decades before meeting the wrecking ball, 4522 Birch Street, inside Loop 610 near Bellaire’s Evergreen Park and Nature Discovery Center. Her two-story frame towers above a neighborhood of single-level ranch houses. And she has welcomed new occupants.

A couple has taken up residence with their baby girl. Three years later, a sister comes along. As time goes by, sisters Gayle and Mayola Martin fill the house with the sweet strains of classical music, practicing piano daily. When they fly the nest, it’s for New York City and The Juilliard School.

“My time in that house was one of creativity, music, drawing, painting and reading,” says Gayle, a concert pianist who now lives across the street from where her childhood digs once stood. She has hosted a gathering this day for Sid, his wife Julie, and the couple who recently purchased the property from her and her sister.

Yes, the '30s saltbox recently met house heaven. She was past the point of a facelift, no quick fix to erase the ravages of time. But no one is happier for new property owners Maxi and Cynthia Jambrina than those sitting at Gayle’s dining table.

The room is abuzz with stories and laughter. Sid unfurls his dad’s original house plans, yellowed by age, and passes around black and white photographs of the house in its prime.

“It’s really incredible,” he says. “I almost can’t believe how we’ve all gotten to know each other through the house. I’m grateful that the Martins enjoyed it for so long after my family, that they enjoyed the fruits of my mom and dad’s labor.”

Indeed, Gayle’s family has longevity with the house. Her accountant mother Alice lived there till her death at 91, in 2016. 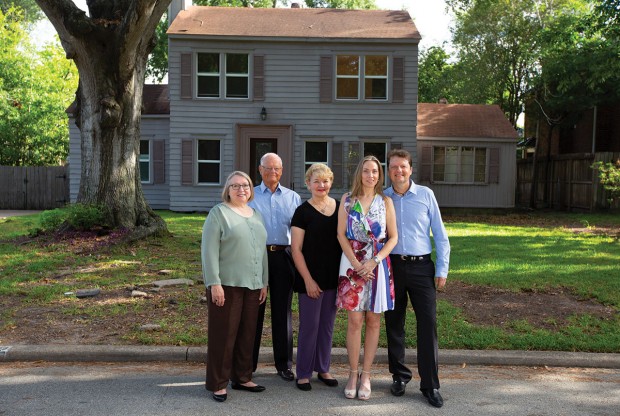 “It’s amazing that in all that time, the house has only had two families occupy it,” says Sid. “I believe that it’s the oldest house in Bellaire that had still been inhabited. And now Cynthia and Maxi can build a new house on that land and create new memories with their children. It warms the heart.”

“It’s exciting but a little sad at the same time, seeing the house go,” says Cynthia, a home designer and builder. She will spearhead the building and design of the family’s new dwelling, a modern industrial house, just as she did their current abode two blocks away.

“We love this area,” adds husband Maxi, owner of an accounting firm. He had flirted with moving his family to The Heights to be closer to work. But son Christian, 7, and daughter Dominique, 6, love the neighborhood and their friends at Horn Elementary. The lot with two large oaks planted by Sid’s father is perfect for their new home.

Cynthia is planning a memory wall for the new structure, replete with the champagne cork popped at closing. The bubbly was a gift from Sid, sent via Gayle. “And Dominique will take piano lessons from Gayle right across the street,” Cynthia says. “How perfect is that?”

“The significance of the champagne is that the vendor’s name on the bottle is the same as my mother’s maiden name, Albrecht,” Sid explains.

Sid’s father, Curtis Sinclair Wells Sr., who went by Sinclair, moved here from Iowa in the late '20s, a child of the Great Depression. Bellaire was dotted with rice farms to the south, cotton fields to the west. Sinclair looked to the horizon and imagined a dairy farm. Sleeves perpetually rolled up, he bought three acres and pursued his vision.

He originally built a single-room structure for himself with a garage/stall for cattle, explains Sid, but that morphed into full house plans in 1935 when Sinclair wed sweetheart Annabel Albrecht. With a $2,500 mortgage application approved, he and a carpenter friend got cracking on the family home. Sid was born a year later. 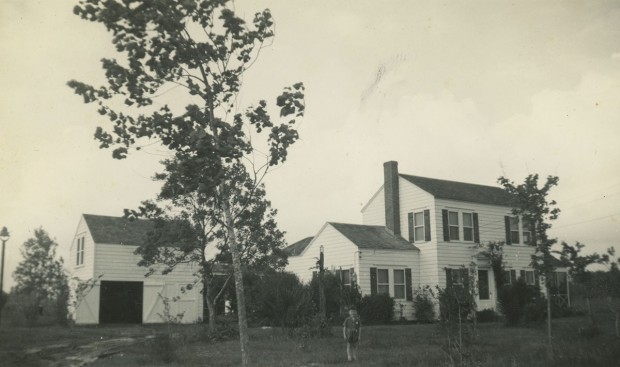 Annabel and Sinclair named their place Bel-Clair, the last syllables of their first names.

“Not only did my father have this dairy farm, but he worked for Houston Lighting & Power, taking the bus to the downtown office,” Sid explains.

He was also the volunteer chief of the Bellaire Fire Department. As a young kid, Sid was the fire department’s mascot. Sporting a uniform, badge and a smile, he’d represent the department at competitions, watching firefighters hone their skills.

“You know what I think of when I think of that house? Community,” says Sid. “Bellaire was a community in the truest sense of the word. People helped each other.”

Sustainability also comes to mind. Sid and sister Carolyn raised rabbits for the meat. “I mean, they were nice pets, too, but my sister and I actually sold them during the war because other meats were difficult to get.” They also raised chickens for eggs.

“It was that kind of self-sustaining lifestyle that people dream about now. People took care of themselves and each other and always had enough to eat.”

“But one of my favorite stories about Sid and that house involves his horse,” says wife Julie.

Beauty was her name. When the war ended, Sid and sister Carolyn sold their savings bonds to buy the horse and a saddle. Sid would regularly hop on Beauty and head to Camp Hudson, a Boy Scout camp, long since gone. By today’s landmarks, the gallop was the distance from Bellaire to the Galleria.

“Can you imagine taking off on your horse in Houston? As a 12 year old?” Julie says, chuckling. Hooves flew along oyster shell roads, passing only one house along the way. One with greyhounds. Who wanted to outrun the horse.

“Every time,” says Sid of the trip. “Those greyhounds could run about as fast as the horse could.”

Animals have a long history with the house. Plenty of dogs puttered about when Gayle’s family lived there. She remembers a particular one, Bimbo the bulldog, who chewed a finely carved dragon head off the base of a cherished antique table. He also ate the tops off of their captain chairs.

Her dad Edwin K. “Leftie” Martin, a crackerjack left-handed baseball player in his younger days, had a career in life insurance. But long before that, while World War ll raged, he arranged entertainment for the troops as overseas director of the Red Cross.

Decades later, when a husband and father, his accumulation filled the rooms of 4522 Birch Street.

“The house was kind of old and in some disrepair,” explains Gayle. “My dad was not a handyman. But he loved the fine arts. Our house was filled with pretty things.”

Originally a two-bedroom, one-bath house, Gayle’s family added a downstairs bathroom, and converted the front sunroom into a master bedroom. A den was added to the back. Ironically, the only part of the house that leaks is the addition, she says, laughing.

When Hurricane Harvey sat on Houston in August 2017, it was one of the few houses on Birch Street that didn’t flood due to an 18-inch clearance on piers. While Gayle’s took in water, the old homestead stood steadfast like a port in the storm.

“I’ve said my goodbyes,” Gayle says, “and Sid has too. It was a great house, and I know how much it means to him, the fact that his dad built it.”

This past spring, the little saltbox awakened to familiar tread. Gayle, Sid, and Sid’s sister Carolyn Riegelman, a nationally acclaimed artist, walked her rooms, opening doors, portals to their childhoods. Sid’s wife was along for the tour as were Carolyn’s daughter and granddaughter. The group then retired to Gayle’s house where she served hors d’oeuvres and champagne and treated them to a classical concert on her Steinway.

“It was a special time, and I think there will be more of those to come,” says Gayle, reflecting on relationships formed through the love of a house.

She witnessed a moment that speaks volumes about family, memories.

“Sid placed his hand on the side of the house and said, ‘My hand is where my father’s hand was.’ Just that simple act. It was so sweet. That kind of says it all.”