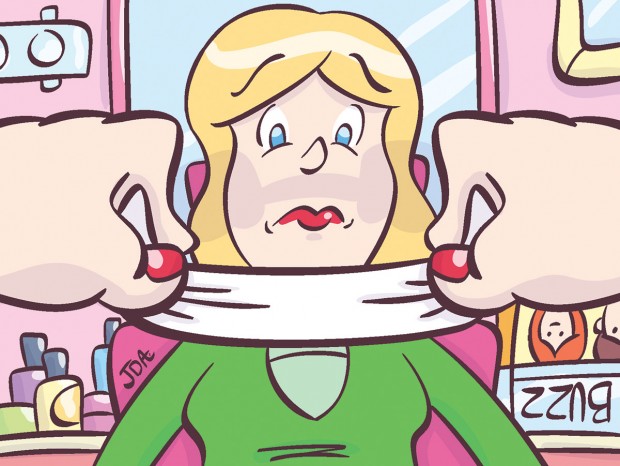 MINOR PANIC Sometimes going to the salon is anything but relaxing. (Illustration: behance.net/runamokstudios)

You know the feeling. Sitting in the chair at the nail salon, trying to relax as the massage bar rolls up and down your back. Breathing deeply in hopes of enjoying the foot massage. But you just can’t quite get there, because the technicians are talking and laughing in another language that you can’t understand, and you’re convinced they must be discussing your unshaven legs. Are you paranoid?

Truth is, you’re not. I didn’t believe it until I actually asked a couple of technicians in the neighborhood who I like and trust.

“It happens,” one of them confided. “We all speak the language, so we know what is going on. They’ll be smiling at the client and will turn their head, with a smile on their face, and tell their co-worker how difficult the client is or how picky she is. She’ll talk about how bad their feet are, or they can’t believe it took them this long to come in and why don’t they take care of their feet and now we have to do it.

“That comedian who does the skit about the nail salon? It’s funny. But it’s true.” (Google Anjelah Johnson’s “Nail Salon” skit.)

And what if you confide in your technician (or hair stylist or waxer), sharing your personal stories? “A lot of times they’ll repeat whatever drama the client has in their life,” the technician told me. So basically they’re looking at the client, smiling, listening, and then turning to their friend and repeating the story to illustrate how crazy the client is? “Yes.”

Sitting in the cushy pedi chair of a nail salon brings more vulnerabilities than just a language barrier.

A friend recently stopped for a pedicure, and as she soaked her feet and smiled at the nail technician, another technician approached. “Do you want your eyebrows waxed?” she asked.

After a silent back-and-forth in her mind, the client said, without much conviction, “Sure, I guess I should do that.”

“No, definitely only the eyebrows,” said the friend.

Innocuous enough. Except that when the esthetician (the waxing lady) approached with the hot wax, she painted the friend’s eyebrows, and then went straight for the jugular (or right above it): She applied hot wax to her client’s upper lip.

“It was so fast I didn’t have time to block her,” the friend says. “I said, ‘No lip,’ several times, and then she caught me off-guard. It was so weird. But since she already started, I just rolled my eyes and put my head back and said, ‘Have at it,’ because what was I going to do since there was wax on my lip? Then she ripped it off and showed me and said, ‘Look, it’s better. Look how much hair was on there.’

“I did not care. I felt violated. You would think it’s just a stupid thing and who cares, but all evening I kept thinking about it because I was sitting in that chair and had no choice. It was a total loss of control. I don’t have PTSD – it was a lip wax. But I was so angry.”

Mary Oleyar, a designer of online classes, had a similar experience at the hair salon. “I had bleached my hair,” she says, “and I wanted to get it back to brown. When I went into the salon, my colorist started talking to another stylist, and together they were saying, ‘Why are you going to do that? It looks so much better blonde.’ I told them the blonde just didn’t fit my personality, to which they responded, ‘Is that because you don’t think you’re very fun?’

I was so conflicted listening to them that I just left the salon. Then I went back a second time, and the colorist said, ‘You probably just didn’t like the tone.’ I wound up leaving with even lighter hair! So the next time, I sent a text. I said I wanted it browner, not lighter, and I didn’t care what they thought. I went back in and told him not to talk to me about it – just do it. I didn’t want to feel more vulnerable than I was. We go in there to feel more beautiful, not to leave with more insecurities than we came in with.”

What can we do? Stand our ground, know our people (nail techs, hair stylists)… and laugh. After all, that esthetician’s got an upper lip to wax, too.

People in this article:
Andria Frankfort
Tags:
Life at the salon, Salon stories