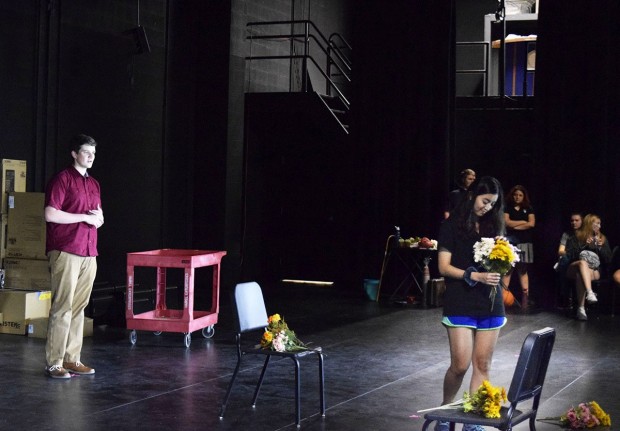 Jack Baugh, a junior at Strake Jesuit, and Bella Zambrano, a senior at St. Agnes, rehearse “Wildflowers” for Fugitive Songs.

“These musicals don't really have a plot,” says St. Agnes senior and musical cast member Rachel Othon. St. Agnes’ fall musical this year brings to the stage a one-of-a-kind experience. Held in the newly-opened Arthur W. Buckley Theatre, an experimental black box theatre, the show is a combination of two one-act musicals, Fugitive Songs and Gone Missing, which weave together snippets of stories through song and captivating performance.

Fugitive Songs highlights the tales of Americans’ lives through music. Othon describes the one-act as “a collection of songs that all talk about running from, to, or with something or someone.”

Based on actual interviews conducted by writers, Gone Missing is a documentary-style show that features true accounts of things New Yorkers have lost. Othon’s favorite part of this one-act is getting to share the story of a missing ring in “The Silver Ring.”

The set-up and structure of the musical are particularly unique. Per black box style, the audience is situated on the same floor as the performers, giving the experience a personal feel. The same cast, composed of St. Agnes and Strake Jesuit students, performs in both one-acts. The show’s group and solo numbers allow cast members to have equal stage time.

The cast and crew are thrilled to invite you to their musical. Othon says the shows “will make you laugh, cry and smile all night.”