Taking a year before college 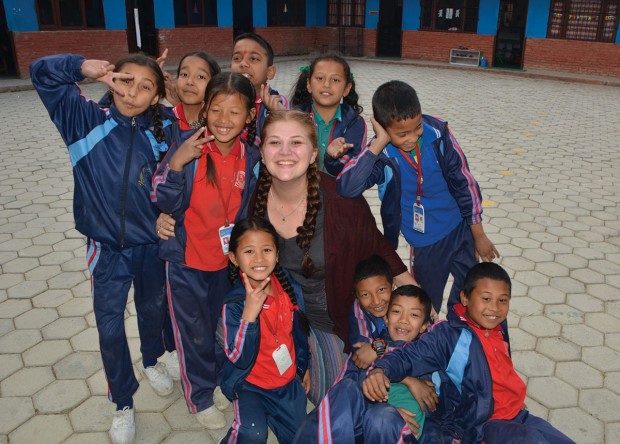 LEARNING WHILE TEACHING Eva Kramer taught English to students in Nepal. "I think the best part of my gap year has been the people I've met along the way," she says.

After graduating from HSPVA in 2017, Eva Kramer went to Northern Iraq, where she worked in a refugee camp and, at one point, was detained overnight and had her passport confiscated. Then she spent six weeks working at an orphanage for sex-trafficked children in Tanzania before going to Nepal where, speaking only a few words of Nepali, she became an elementary school’s only English teacher.

After graduating from Episcopal High School in 2016, Devin Gohel volunteered at the Elephant Nature Park in Thailand, made lanterns for a non-profit in Vietnam and helped build a home and clean temples in Cambodia and Laos. He then did a three-month internship with a tech start-up company in Barcelona.

The unconventional path Eva and Devin took is called a gap year. They both took a year off after graduating from high school and before starting college to travel, pursue interests, gain real-life experience and have adventures. Eva is now at the University of North Texas, studying photojournalism, and Devin is at the University of Michigan, majoring in computer science with a minor in business.

“Gap year” is a broad term. Also called “a bridge year,” it actually doesn’t have to be a year. Many take semester-long “gaps” and start college in the spring. And while the best-known version takes place between high school and college, people also take them during their college years, after college graduation before starting graduate school or work, even in mid-career or after retirement. While many people travel abroad for their gap years, others stay in the United States and even live at home. Some earn money, through paying jobs and scholarships and grants, during their year. Others spend. The most expensive gap years – arranged by consultants and gap-year companies that take care of every detail – can cost as much as a year at a private college, $30,000-40,000, according to Alia Pialtos, director of USA Gap Year Fairs. 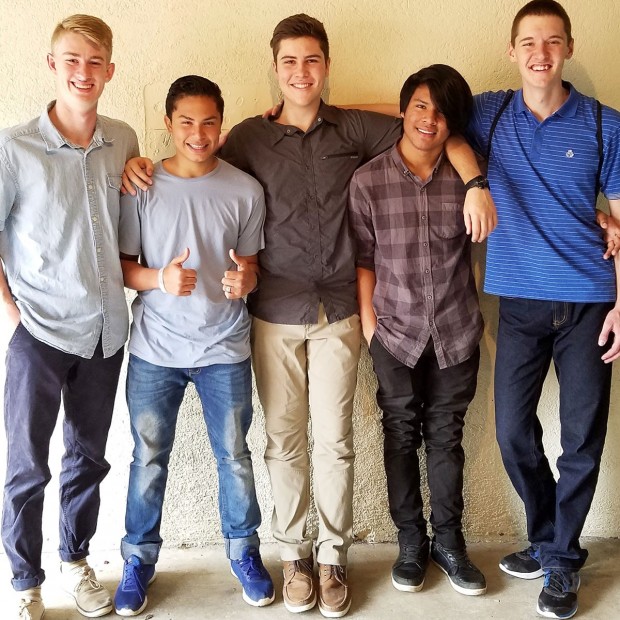 The experiences people pursue are everything you can imagine, plus some. Dianna Hahn, associate director of the Gap Year Association, a non-profit organization that accredits formal gap-year programs, tells of one 19 year old who recently rowed across the Atlantic Ocean to raise money and awareness for ocean conservation. Pierce Davidson, who graduated from Second Baptist in 2016, went to Costa Rica with a U.S. mission organization and studied Spanish and the Bible. Sophia Skelly, who graduated from The Kinkaid School in 2014, backpacked through Europe for three months with friends, went with a formal gap-year program to India and lived on her own in Costa Rica and Nicaragua to improve her Spanish. Alan De Leon wanted to stay put in one place to improve his language skills. Already fluent in Spanish, he spent his gap year in 2013 in a small town in Brazil, the only English speaker for 80 miles, living with a family and working for a non-profit, in order to immerse himself in Portuguese.

While only a small percentage of high-schoolers take a gap year, that number is growing, according to the Gap Year Association’s Hahn. And gap years have gained acceptance in the United States, by students, colleges, college counselors and parents, over the last several decades. When it was announced that Malia Obama would take a gap year in 2016 before starting at Harvard, traffic to the Gap Year Association’s website increased by 2,600 percent, according to an NPR report. For more than 40 years, Harvard has encouraged new undergraduate students, right in their admittance letter, to consider taking a gap year, promising to hold their admitted spot for a year; currently, generally more than 100 of their admits, like Malia, take the college up on the idea each year. Many colleges and universities, including all of the Ivy League schools, are pro-gap year, with Princeton being the first college to create its own gap-year program, its Bridge Program, in 2009. Students who have been admitted to Princeton can apply to the nine-month, tuition-free program where they do community service work in one of five locations abroad.

When Pierce Davidson approached the college he had been admitted to and chosen, Baylor University, about deferring his start to take a gap year, it not only agreed but gave him a $5,000 scholarship to use toward his expenses. He was required to write a paper about his experiences. His gap year, through Score International, cost $10,000, including his room, board and classes but not his plane ticket.

Alan De Leon’s university, The New School in New York City, offered accepted students the opportunity to apply to a gap-year program the school runs in partnership with Global Citizen Year. In addition to working with a non-governmental organization (NGO) in Brazil for the year, De Leon did college-level work, corresponding with a New School professor by mail and email, and entered the university as a sophomore when he returned.

Perhaps the biggest trepidation parents have about gap years is that, if their child doesn’t go right into college after high school, they might not go at all. The key, experts say, is not to delay college but to defer it. High-school students interested in doing a gap year should apply to colleges on schedule with their peers. It’s never easier to apply to college than when you are in high school, with your college counselor and teachers on hand to send out your transcripts and write your recommendations. “It’s really difficult to fill out an application from the Serengeti,” says the Gap Association’s Hahn. When looking at colleges, students can ask what the school’s policy is on deferments and gap years. Most grant deferments, though some may want information about what the student has planned for their gap year and, in some cases, the student may have to reapply for financial aid for the following year.

Although it’s not unheard of for students to change their minds about where they want to go to college after taking a gap year, Julie Rollins, director of college counseling at Episcopal High School, advises against betting that taking a gap year will make for a better application and get you into a more competitive college. “You should still apply and decide on one” beforehand, she says. 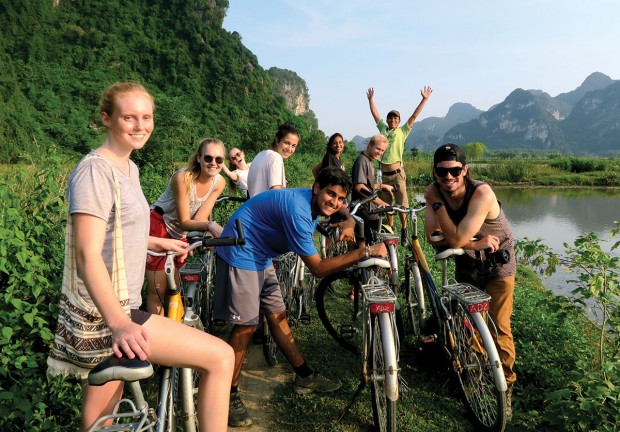 SEEING THE WORLD For two months of his gap year, Devin Gohel (center) travelled through Southeast Asia with a group of 10, led by two guides from a company called Pacific Discovery. Pictured here during a bike ride in Vietnam, the group stays in touch.

Another key is to have a structured plan for the year. The Gap Year Association’s definition of a gap year, between high school and college, is “a concerted opportunity, to expand the self, do some exploration, reflect,” says Hahn. “It’s not sitting at home playing video games.”

Luckily for gappers, as they’re called, the problem isn’t coming up with an idea for a gap year; the problem is being able to choose from all the opportunities. Gap years are an industry, with dozens of companies offering packaged trips. The Gap Year Association, a nonprofit, accredits programs that meet their criteria, while Gap Year Fairs brings a college-fair-like event to showcase such companies and other organizations, to Houston once a year, usually in January or February. In past years, Episcopal and Strake Jesuit have hosted the fair. Gap-year consultants will, for a set fee, usually $2,000-3,000, help a student choose and organize their plans. Devin Gohel used a counselling company called Center for Interim Programs. “In the beginning, I did research on my own and was overwhelmed,” he says. “They know hundreds of companies, get feedback from students who have gone on the trips, can help you find a good fit.” In addition, many nonprofit and government entities, from the Rotary Club to the State Department, offer gap programs that are low in cost, and may even pay participants, but can be competitive to get into.

Many gappers do a number of short-term projects, often moving from country to country, during their year. When Sophia Skelly started researching gap years, she turned to the student Facebook pages of her future college. Colorado College is very gap-year-friendly; a full 12 percent of its newest class have taken a gap year. Skelly was able to get advice directly from recent former gappers. She decided to start her year with a structured program, a trip to India with a company called Carpe Diem, and then move to less-structured plans as she became a more experienced traveler. In her last month, she was “the only gringa” at a university in Nicaragua, where she took Spanish classes.

Eva Kramer knew she wanted to go to Nepal when she was 15 and saw a documentary about the country at school. When her trip, arranged through an organization called Projects Abroad, was delayed for three months, she decided to visit her aunt and uncle who were missionaries in Northern Iraq. As hostilities drew close to where they were, the missionaries began to leave, but Eva and her aunt were detained before they could board a flight. “I knew something bad had happened when I got a text from Eva, saying, ‘My passport’s been confiscated. Do you have a copy of it?’” remembers her mom, Colleen Kimball. The next text Collen got was, “We’re in Africa, having the best time. Will tell you all about it later.” Eva and her aunt were held overnight in a jail where no one spoke English. Says Eva now, “Being detained in Iraq was scary, but it is not something I consider to be a bad part of my trip. It makes an incredible story and is very funny, looking back.”

Of her entire adventure, Eva says, “My gap year changed me in more ways than I can count. I have matured into an adult, I have become more tolerant…. To say it’s been life-changing doesn’t even scratch the surface.”

Research has shown quantifiable benefits to doing a gap year. Gappers tend to take less time to graduate from college and do so with higher grade point averages. Later in life, they report higher job satisfaction and are even more likely to vote.

Alan De Leon jokes that it was funny to see his fellow new college students trying to figure out how to use a washing machine when he had spent the last year washing his clothes in a river. But he also says that the week of re-entry training his program provided to returning gappers was surprisingly helpful. “It helped us to reacclimate to America,” he says, and felt more geared to his needs than the ordinary freshman orientation he also attended.

Says Sophia Skelly, “I did feel a little different than the other college students, but that’s not necessarily a bad thing.”