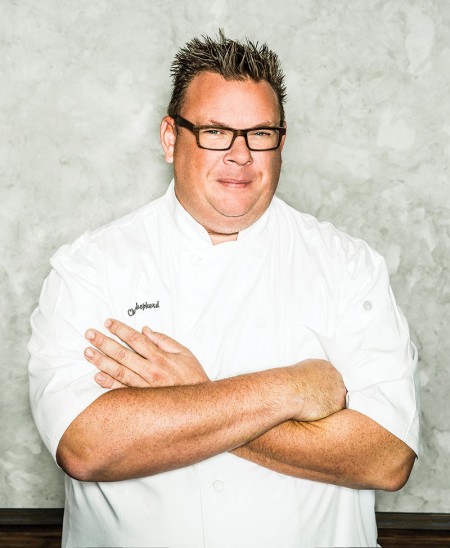 After the summer lull, fall is an exciting time for the restaurant industry. The anticipation of Thanksgiving, Hanukkah, Christmas, New Year’s Eve, etc., pushes many to roll out their new concepts ahead of the holidays. This November is especially electrifying for diners looking for new options for wining and dining out-of-town guests. Here is a short list of new restaurants that have opened this month or relatively recently.

Going “clean,” in addition to “green,” is BIG these days. Located in the old McGowen Cleaners, Vibrant (1931 Fairview) focuses on wholesome dishes free of gluten, dairy, refined sugar and GMO (genetically modified) food. It uses pasture-raised eggs and meats, and strives to source locally when possible.

Perhaps the most anticipated Montrose opening is Chris Shepherd’s Georgia James (1100 Westheimer), replacing the James Beard Award-winning chef’s acclaimed Underbelly, which shuttered in March. The chef-driven steakhouse is named for his mom, Georgia, and dad, James. Both live down the street.

“The thought process was if I was inviting you over to my home, what would I serve?” Shepherd said. “It would be steak night at my house. Growing up, Mom always cooked, so it made sense to call it Georgia James.”

Shepherd also noted that the hustle-bustle always seems to center around steakhouses – old and new – around town. “They’re always busy, and, eventually, they become classics because they’re consistent,” he said.

Wong, a chef to keep your eye on, has earned praise for his astute translations of such dishes as duck-egg curry, grilled pork jowl pastor, and Tejas crispy chicken – not surprisingly, considering his pedigree. A California native who started cooking at age 6, the French Culinary Institute grad has cooked at New York’s Gramercy Tavern, Momofuku Ko and Momofuku Ssam Bar.

Talk about being in a pressure cooker. Ryan Pera opened not one, not two, but four different concepts in East Downtown. Like any dining venture, he and Agricole Hospitality partners Morgan Weber and culinary director Vincent Huynh are taking a big risk, but even more so since EADO is still going through gentrification. Then again, Pera was among the pioneering toques who jump-started Heights dining, and look at it now.

Despite the uncertainty, Pera is encouraged by the success of his EADO neighbor, Nancy’s Hustle (2704 Polk), not to mention that a new $150 million hotel and condo tower is planned next door on St. Emanuel Street. His team also is bolstered by the fact that Houstonians seem to gravitate toward Pera’s unassuming approach to food.

Vinny’s, Miss Carousel, Indianola and a banquet facility are housed in a former industrial electrical warehouse on the corner of 1201 St. Emanuel and Dallas. Vinny’s, a neighborhood pizzeria, has an a la carte menu – from chicken meatballs and Brussels sprouts to chorizo and charred broccolini – that allows for pie creativity.

Miss Carousel (inspired by the song from Townes Van Zandt) is a 3,500-square-foot lounge with mid-century modular furniture and a menu that focuses on shareable fare, like beet-and-carrot tartare, caramel popcorn with wasabi and crispy duckling wings tossed in an herb-infused Vietnamese fish glaze sauce.

Lastly, Indianola is a modern American restaurant inspired by what “we believe America represents to us,” Pera said. Take breakfast, for example. It will feature baby Dutch pancakes, Asian rice porridge and huevos rancheros. 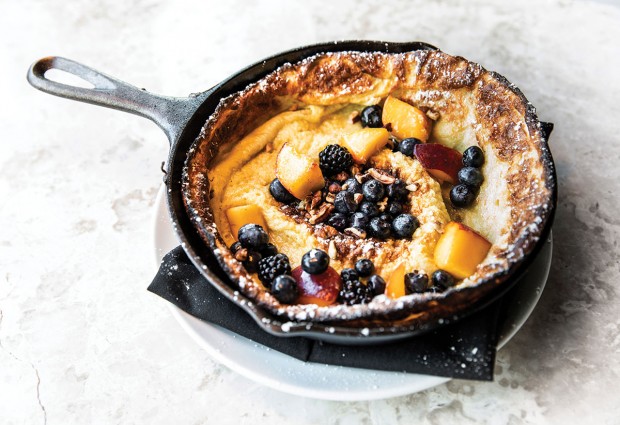 THE CLASSIC ALL DAY The puffed baby Dutch pancake studded with berries and peaches is a brunch hit at Benjy Levit’s new The Classic All Day. (Photo: Julie Soefer Photography)

Northwest of downtown is still going strong. Greg Gordon opened a new chapter with La Vista 101 (1805 W. 18th Street) in Timbergrove, but don’t expect this to be an ode to his shuttered, modest, Italian BYOB in Briargrove. This is a modern, more “worldly approach” to Italian, along with other Mediterranean inspirations.

"La Lucha is inspired by Fry’s childhood memories of the San Jacinto Inn,” said State of Grace and La Lucha executive chef Bobby Matos, showing us the menu, which highlighted the Inn’s oysters and chicken dinners.

Fry and Matos serve up their interpretation of these classics with a half or whole fried chicken dinner, served with homemade biscuits and pickles. But here is an update: It comes with a choice of green harissa, honey sambal or oyster mayonnaise condiments. Diners also can add a half-pound of fried shrimp for $16.95. However, Matos is particularly proud of his fried oyster loaf, sandwiched between Mrs Baird’s white bread and slathered with Duke’s Mayonnaise. The approach to food here is laid-back, much like adjacent Superica. The 4,850-square-foot Tex-Mex hub dishes out such classics as chicken flautas, bean-and-cheese nachos, cheese enchiladas and tacos al pastor. And, of course, there are the grilled fajitas, menudo, ceviche, and posole.

Across Highway 59, Flower Child (1101‐06 Uptown Park Blvd.) of Fox Restaurant Concepts is riding high on the clean-eating trend. During weekday lunch, expect a long wait. The line is out the door with sweat-beaded Houstonians hankering for gluten-free mac and cheese, sustainable salmon with quinoa and sweet corn, or a bowl of ancient grains. You get the drift. The beef is grass-fed, the chicken is all natural, and the tofu is non-GMO.

More restaurants are on their way for December and 2019, including several food halls. The food-court trend, big on the East and West Coasts, is picking up steam in the Bayou City, but more on that some other time.