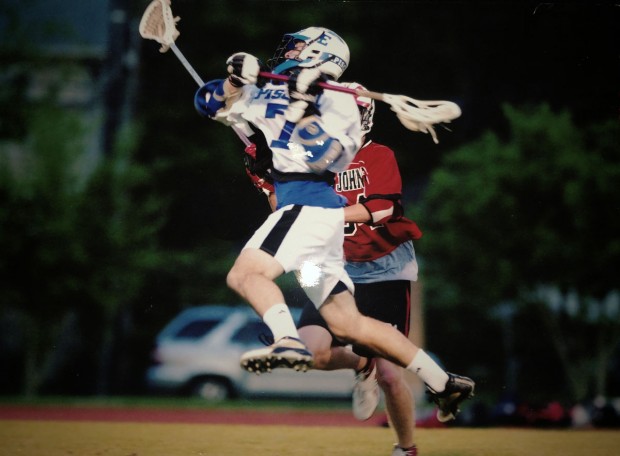 But throughout college at Cornell and during his post-graduate studies at U Penn, Drew battled depression. He died by suicide in April 2010. 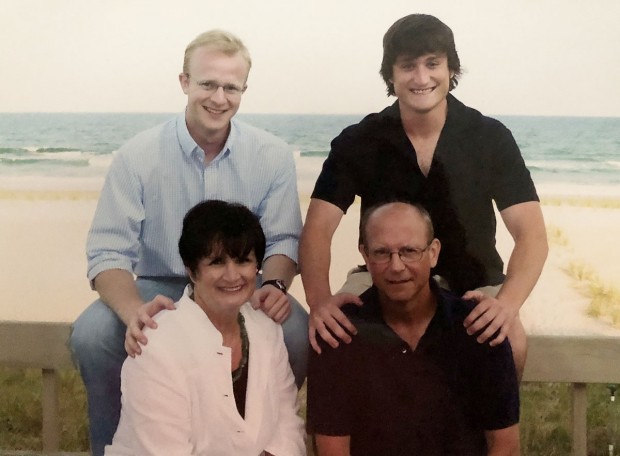 The Webbs capturing a great family photo on a beautiful beach day. Pictured are parents Dorothy and Hall Webb and (top row, from left) Thurston and Drew Webb.

Since then, Drew’s parents, Dorothy and Hall Webb, have become strong advocates working to eliminate the stigma of depression and suicide and promoting assistance for other families in this situation. Dorothy now serves on the board of re:MIND (formerly the Depression and Bipolar Support Alliance of Greater Houston).

Nonprofit re:MIND provides free and confidential support groups for individuals living with, or family and friends affected by, depression and bipolar disorders. They also collaborate with Communities in Schools Houston, school counselors/social workers and support staff to offer many groups for some Houston-area high schools. 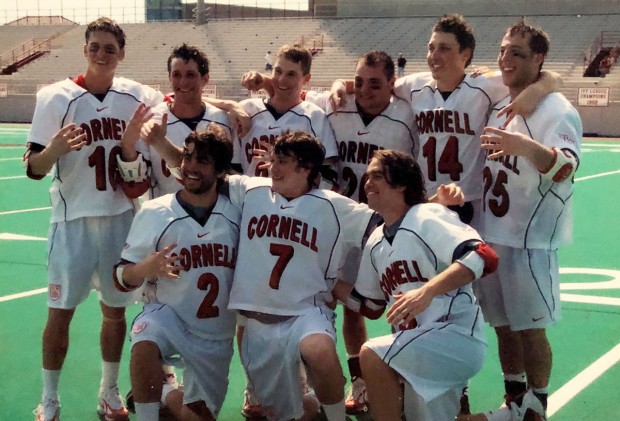 Dorothy shared, “If we were writing Drew’s obituary today and not eight years ago, we would have written ‘died by suicide’ just like a family might mention cancer, car accident, surgery complications or heart disease. More people need to understand that is another form of a brain disease and people shouldn’t be afraid to tell people or seek help.”

Drew’s older brother, Thurston Webb, gave the eulogy at his funeral and shared these wise words: “Depression is a disease. It is not a character flaw or weakness."

In addition to his family and friends, Drew was a beloved individual in the lacrosse community and considered to be a hero of the sport’s growth in Houston. His death shook players and coaches in the Houston area and around the country. 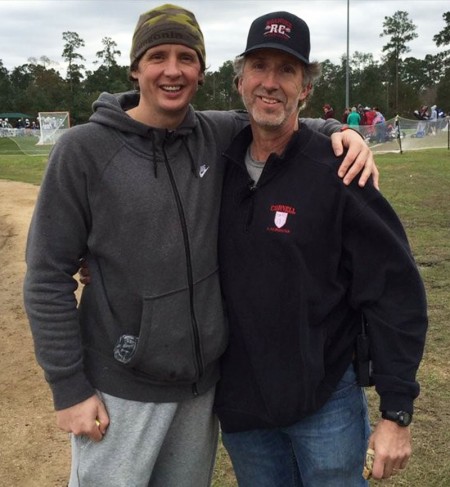 Matt Streibel (on left), Princeton and Major League Lacrosse midfielder with Dr. David Lintner, tournament founder. Matt never met Drew but he came down to the first tournament to give a clinic and bonded with Drew’s friends and family. He is a big fan of the tournament and has returned many times.

One of those people was Dr. David Lintner, chief of Sports Medicine at Methodist Hospital. Dr. Lintner founded the Houston Hurricanes, a competitive youth lacrosse team. He hired Drew, a college graduate and lacrosse star, as one of his first lacrosse coaches to help launch the program. Drew also coached Dr. Lintner’s two sons, Michael and Matthew.

A month after Drew’s funeral, Dr. Lintner shared with the Webbs that the lacrosse community wanted to coordinate a tournament to celebrate Drew and raise donations for the charity of their choice. Dorothy and Hall appreciated the idea and chose the Depression and Bipolar Support Alliance in Greater Houston.

The tournament was named 7s for 7 because Drew always wore jersey number seven and the tournament uses smaller fields with only seven players (instead of the usual 10). 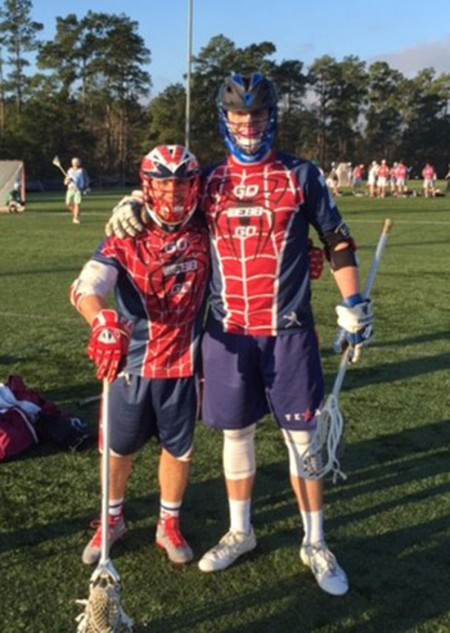 One of the people Drew coached was Matthew Lintner who is seen here with family friend, Ross Gillum. They are representing 7s for 7 team “Go, Webb, Go!” and sporting their Spiderman uniforms covered in “Webs”. Other funny team names have included the Mountain Drews.

Drew’s tragic death galvanized the Houston lacrosse community. The annual tournament is the community’s way of honoring his memory and raising funds to prevent such tragedies in the future.

That first year, Dorothy and Hall thought the tournament would be small with just a few teams. They were shocked when more than 30 teams participated. Since then, 7s for 7 has continued to flourish. Over the years, hundreds of people, from ages 9 to 66 years old, from across the United States (including many of Drew’s Cornell teammates) have participate with up to 90 teams some years.

“Hall and I are so touched that the tournament is still happening,” said Dorothy.

The Webbs wanted to be sure people recognize that a large part of the tournament’s success is due to the hard work of David and Katie Lintner, founders of the tournament, since the beginning in 2011. The past few years, Katie’s hard work behind the scenes has been aided by her logistics partner in crime, Mary Zimmermann, the tournament coordinator. 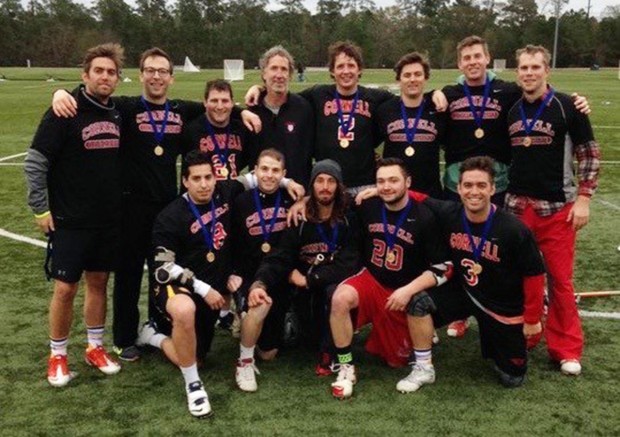 Drew's former Cornell lacrosse teammates fly in from all over the country to reunite, play lacrosse and toast to their buddy's honor.

“The fabric of the tournament is for everyone to have fun playing a game that Drew loved and for those that knew Drew to remember him.” said Dr. Lintner. “The main goal is to raise donations to put towards mental health care in young adults but, perhaps even more importantly, to raise awareness of this disease among young athletes and coaches. Our goal is for a young athlete with mental illness to be treated like an athlete with an ACL injury, low blood sugars or a disease like diabetes rather than feeling like or being treated as an outcast or weakling.”

Over the years, close to $300,000 has been raised for re:Mind. Elisa Dreghorn, re:MIND Development Director, said, “The funds raised from the tournament have been a great blessing to re:MIND.” She said she appreciates what a great forum the tournament is for creating awareness about depression among family members, especially young adults and athletes. “We are trying to take away the stigma and start dialogue. We also have the opportunity to make sure people are aware of re:MIND’s many free workshops located all over the greater Houston area as well at many other depression and bipolar resources available on our website.” 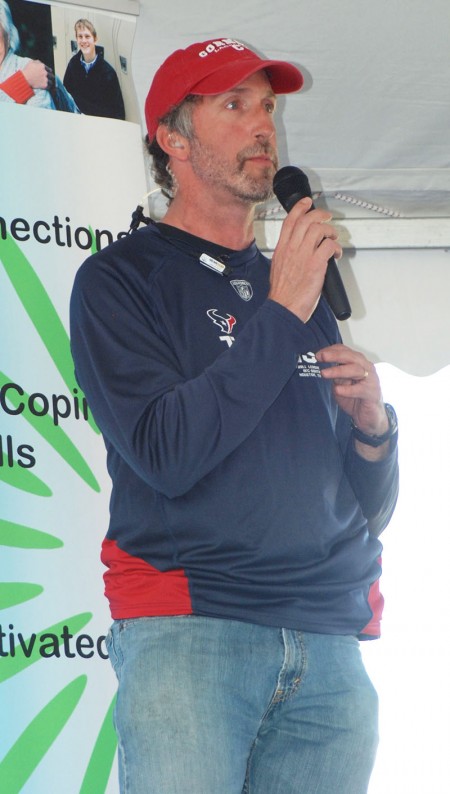 Dr. David Lintner, who’s also an alum of the Cornell lacrosse team, founded the 7s for 7 tournament in Drew Webb’s honor. Dr. Lintner is Head Team Physician for the Houston Astros as well as Team Physician for the Houston Texans. Here he’s pictured addressing the tournament audience with information about re:MIND and how the organization and its support groups can help families and individuals impacted by depression.

Other local tributes to Drew over the years included Episcopal High School retiring his #7 lacrosse jersey and the Houston Christian lacrosse team, who Drew helped coach, creating a scholarship in his honor.

Before Drew graduated from Cornell in 2008, he was interviewed for the school paper. In his own words he demonstrated his love and enthusiasm of lacrosse in Texas: “I would also like to say that some lacrosse memories that I cherish the most have to do with playing on Team Texas and beating other state teams that are considered typical hotbeds. Not only did I love the people on that team, but we played with a purpose, for our state.”

Dr. Lintner shared that one of the moments he loves most about the tournament every year is when Drew’s dad, Hall, will inevitably suddenly stop and, with a smile on his face, say: “Do you hear that noise? It’s laughter. Isn’t that wonderful?”

The 9th Annual "7s for 7" Lacrosse Tournament takes place Sat., Jan. 5, 9 a.m.-8 p.m. The deadline to sign up to participate in Weds., Dec. 19. Sign up here. The tournament, benefiting re:MIND, honors Drew and takes place at Bear Branch Sports Field in the Woodlands. Spectators and supporters are welcome to attend.