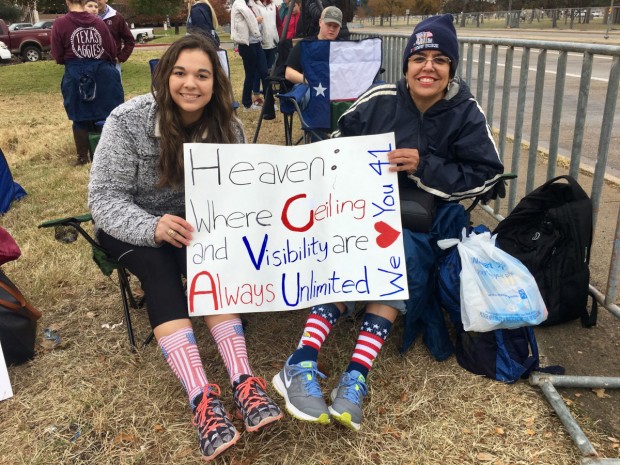 Had I given proper thought to hosiery when I headed to my old stomping ground, Texas A&M University, I would have tossed on my pair of blue and yellow tabby cat socks. Or maybe the red polka dot numbers with lime green stripes.

For this was a special socks kind of day. 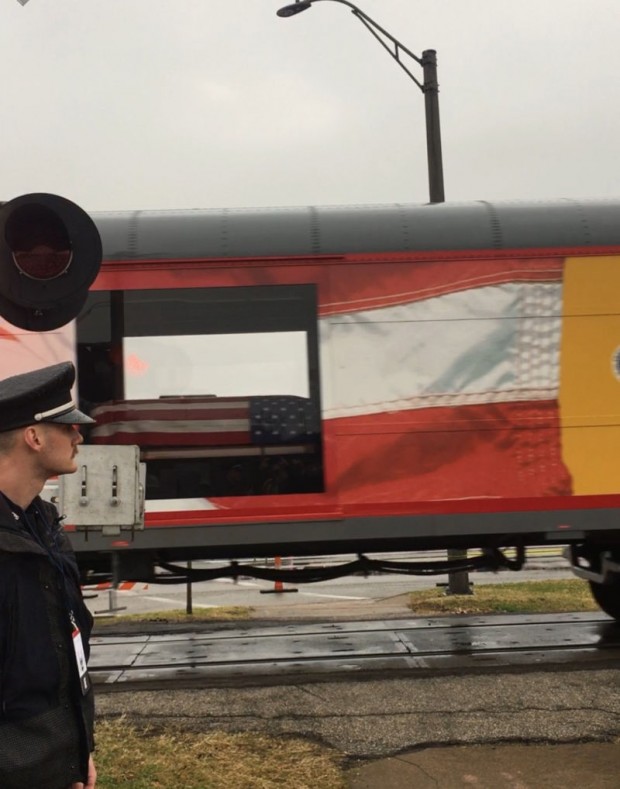 Along with the homemade signs, hats and T-shirts honoring former 41st President George Herbert Walker Bush, sock salutes abounded for the premiere hosiery diplomat as his flag-draped casket, in clear view through large plexiglass window, traveled by train to his final resting place in College Station.

Whoops went up and cameras came out as haunting whistle broke through dreary skies. Onlookers jockeyed for vantage points, even rooftops, to pay respects to the former president.

“The man had such class and his socks… oh my gosh. Of course, that’s the first thing we thought of coming here. We were going to represent,” says Taylor Janak, 21, a senior animal science major, sporting flag socks with mom Regina. Taylor, an admitted presidential history addict, recalls feigning illness at age 7 so she could stay home and watch President Ronald Reagan’s funeral. “So I sure wasn’t going to miss the Bush train.”

Socks were getting a bit soaked, though. 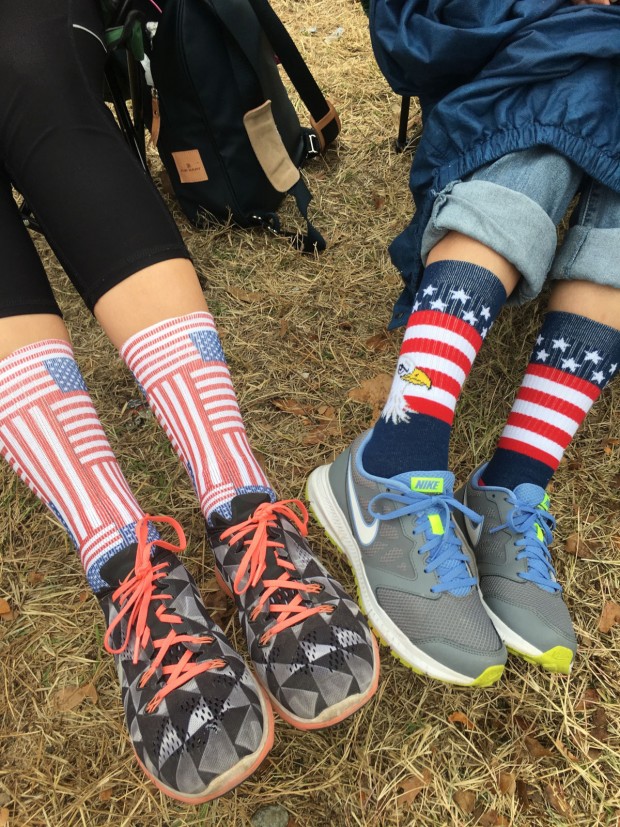 The weather was not Ceiling and Visibility Unlimited (CAVU), to borrow former Navy pilot Bush’s favorite acronym, meaning perfect flying weather. Temperatures dropped quickly and rain fell as the masses descended on my viewing spot, a grassy slope leading to the railroad tracks outside of a McDonald’s restaurant at the corner of George Bush Drive and Wellborn Drive. My quick talk with a policeman led to this coveted corner, the best place, closest to the railroad track.

I stood there for six hours with a handful of people including Taylor. We held to our front line status. As train headlights became visible, onlookers reached for cell phones and cameras, recording history. They waved flags, signs. George Bush, former First Lady Laura Bush and daughter Jenna waved to the crowd. 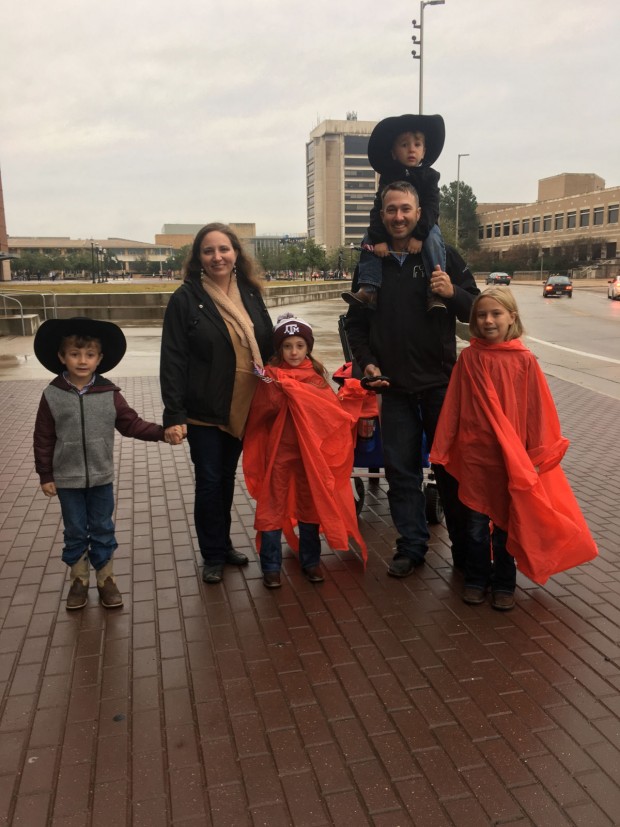 “I saw George Bush waving right at me. I can’t tell you how much I admire the Bushes. We took our kids out of school to see this,” he says of his four children. “We will never see something like this again in our lifetime, a train carrying our 41st president and our 43rd president too.”

Anastasia recalls going to the campus’s George Bush Presidential Library several years back, not realizing it wasn’t open to the public that day. “George Bush and his son George were there playing horseshoes. Nobody else around. They said hi to us and were having a great time, just smiling and laughing. They were so nice to us.” 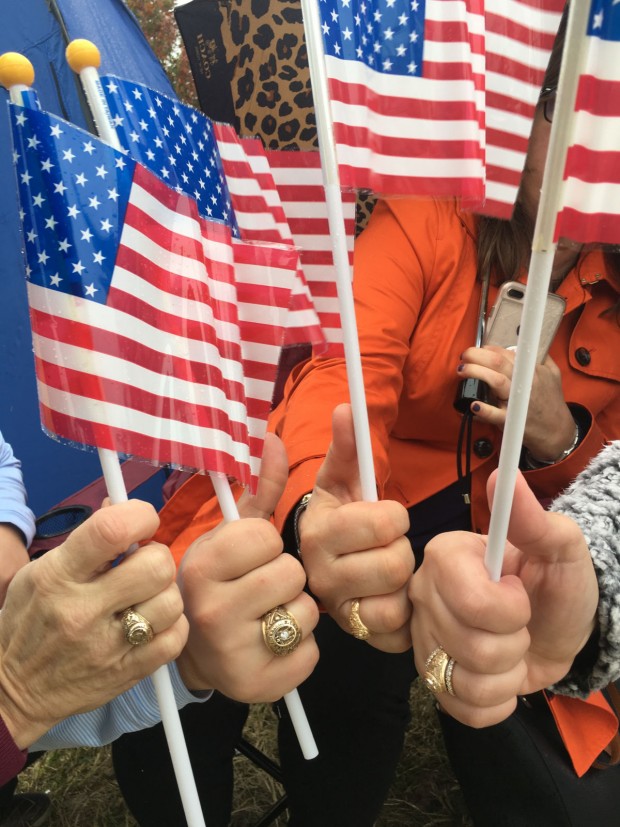 “Yeah, I just think they’re an amazing family,” agrees Taylor, who saw the plane carrying Bush, Special Air Mission 41, as it flew over College Station the day it headed to Houston for the funeral at his hometown church.

“There was a rainbow right before it flew over and then it flew off into the sunset,” she said of her viewing spot above the campus’s west parking garage. “I had chills. Everything just fell silent. It was perfect.”

Read more about the ceremony honoring George H.W. Bush at Ellington Airport on Monday morning, Dec. 3 and at City Hall that evening. 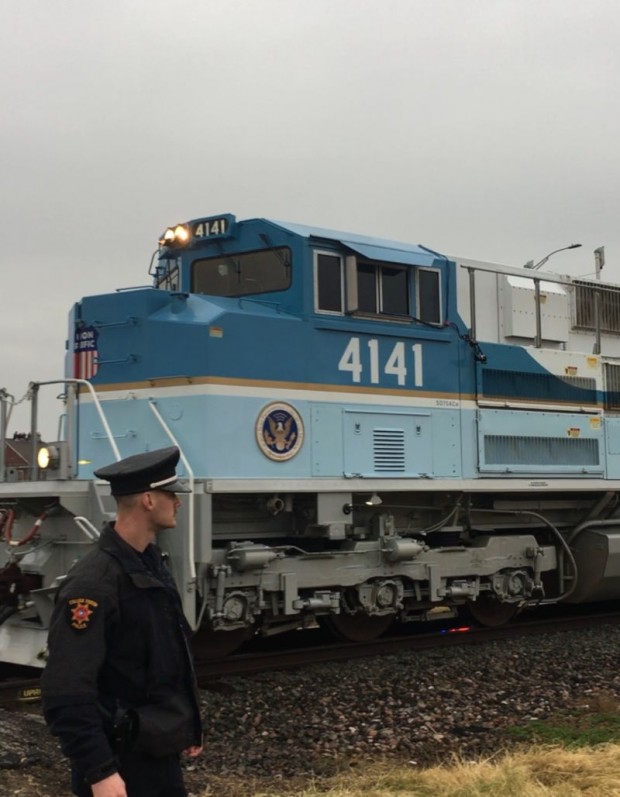 THE PRESIDENT’S TRAIN A police officer watches as the train passes crowds. 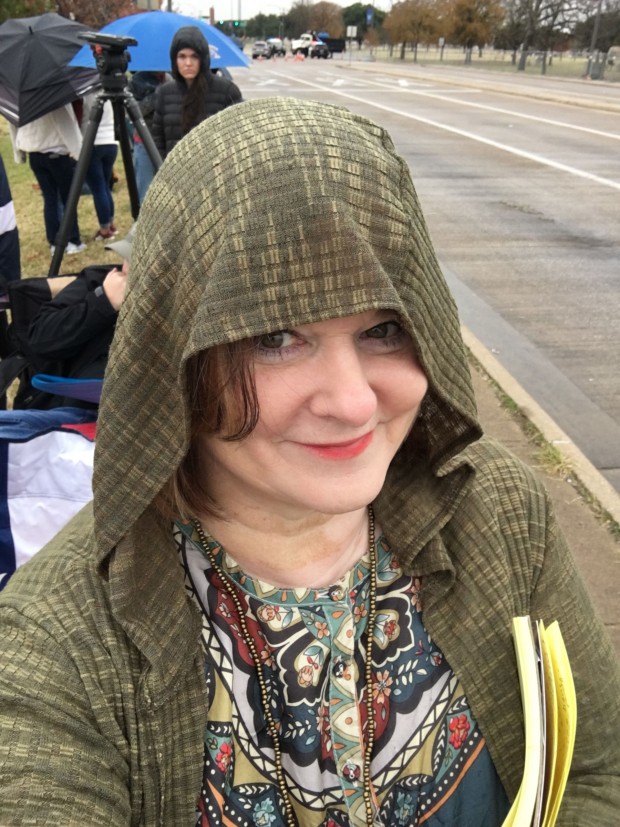 AGGIE CATHY  Writer Cathy Gordon, who earned a journalism degree at Texas A&M University, was one of many onlookers when the train carrying Bush passed through College Station. 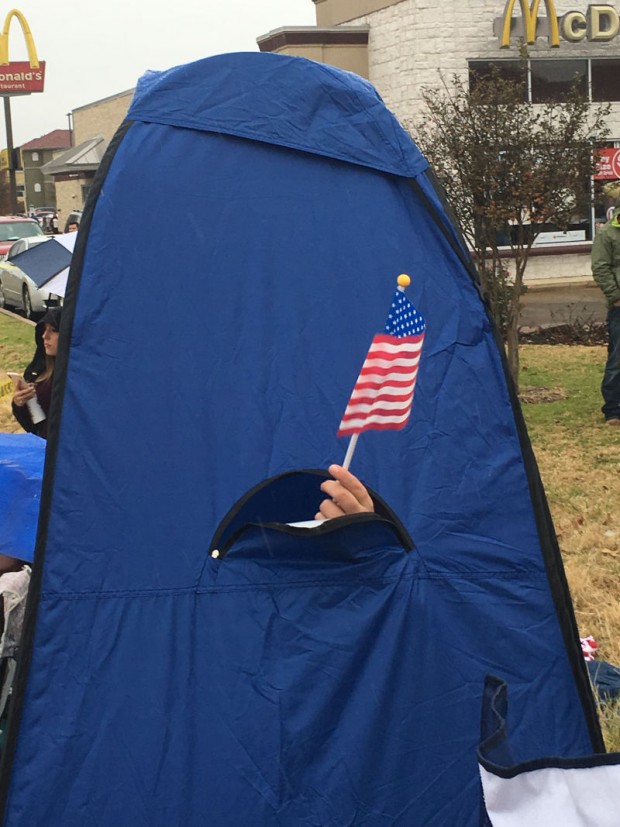 TENT PATRIOTISM An onlooker escapes the rain while waiting for the Bush train.