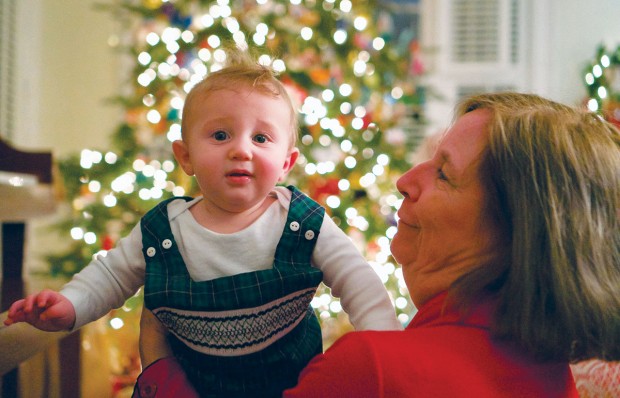 INSPIRATION Held by his grandmother, Olivia Fisher, little Mark Elliott Bellows models one of her many creations – this one was worn by his Uncle Richard a generation before. Olivia, a gifted needlepointer, makes Christmas stockings, wall hangings, outfits and more.

Even if you naturally have a crafty side, sometimes you need a little inspiration to motivate your creations. Like a baby. Or a grandbaby.

Decades before little Mark Elliott arrived, his mom Anne was his grandmother’s inspiration, along with his mom’s brother, Richard. They inspired his grandmother to spend thousands of hours crafting needlepoint creations and creating gifts, school-auction items and more.

Olivia, who is patiently waiting for Mark Elliott to dub her a grandmother nickname, has been a gifted needle pointer most of her life. Daughter Anne says her mom’s house is filled with needlepoint pillows, framed needlepoint, and benches. “Pillows only the baby is allowed to touch,” said Anne, smiling. “He gets away with everything.”

Olivia, who spends part of her time at her house in Wyoming, has found humor in the amount of needlepoint that she has crafted over the years. “My joke is that my needlepoint will probably be party favors at my funeral because my kids won’t want any of it,” she said, laughing. “No one needs all of that.”

Anne, a former middle school art teacher and now at-home mom, recalls falling asleep as a child to the sound of her mother’s sewing machine down the hall. “Now that I’m a mom to only one child, I wonder when my mom ever had time to make anything for us,” she said.

Anne says her mom always had a project. “Whether we were traveling or watching a movie, she’d carry her plastic bag with her canvas and threads everywhere.” When Anne left for college, she returned to find her dresser had become a workspace for Olivia’s collection of threads – filling the dresser with a rainbow of colors. 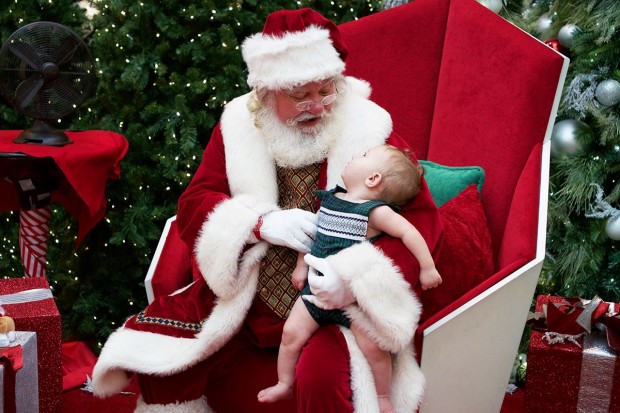 SANTA SIGHTING Mark Elliott Bellows wore his uncle's smocked outfit to meet Santa for the first time. The outfit was made by his grandmother Olivia Fisher.

Mark Elliott wears a smocked jumper that belonged to his uncle – Anne’s brother, Richard – when he was a little boy. The outfit has been saved for years to pass down to the next generation.

“I like to make funky things,” said Olivia. The Christmas stocking she made for Mark Elliott has a reindeer on it with his monogram inscribed above it, “MEB,” and little holiday lights hang from the antlers. Olivia also made a hippopotamus-themed wall hanging for his nursery.

Anne says her mom has been known to work on just one piece daily for six months. Olivia says she is not planning to stop anytime soon.

Another avid creator, Mia Appling can be found most days crafting the latest creation for one of her three (and one more on the way) grandchildren. She spent hours crafting special keepsakes for her own three children, although sometimes motherhood and a career as an obstetrician-gynecologist didn’t allot as much time. “The joke is that it took until [my son’s] 16th birthday to finally to finish his stocking,” laughed Mia.

Mia has three kids, oldest Amy McCauley, middle Laura Rueckheim and youngest Alan. Each one has a needlepoint stocking and Christmas ornament lovingly made by Mia.

Mia took sewing classes in high school and carried on the hobby as a newlywed. She also learned from her mother and mother-in-law, Nona Morazzani and Latrelle Appling. Her mom was always sewing and crafting, and Latrelle was into stitching. After a stroke left Latrelle partially paralyzed, she couldn’t stitch anymore. Mia carried on her passion. 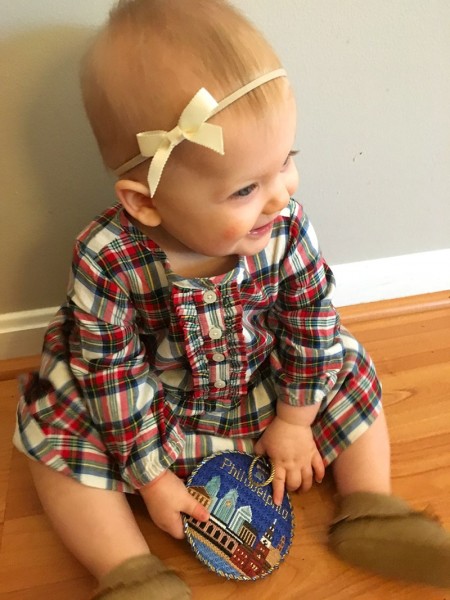 After her nest became empty and she retired as a doctor 10 years ago, she started back up. She has since made Christmas stockings for her children’s spouses, ornaments for cities her family members have lived in, “Shhh! Baby is sleeping” door hangers, nursery wall hangings and more. “There are so many different kinds of threads – every little piece is a different stitching pattern. Then it’s lots of fun to gather up different beads to put on it,” she said.

Mia’s skills have evolved over the years, and she reflects on how far she’s come. “I still have the [items] I made when we first got married,” she said. “It came from a kit at Michaels.”

The carefully thought-out Christmas stockings play a big role every Christmas morning, when the whole family gathers at her house. “We have coffee and breakfast, and then we move into the living room [to open] presents by the tree.”

After Christmas is over, the presents unwrapped, and families return to their homes, Mia carefully packs up the stockings for the next year – and more memories to come.

The Radical King and the Quest to Change America