Sarah Grace Continues to Make Houston Proud on 'The Voice' 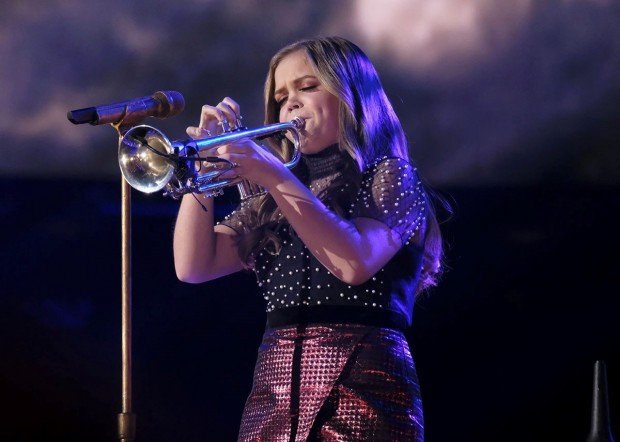 Sarah Grace demonstrates her trumpeting abilities during her blues-inspired rendition of “Amazing Grace,” which she performed on NBC’s The Voice on Monday evening. (Photo: Trae Patton/NBC)

“It definitely was a risk, but that’s what art is,” Sarah Grace said early Tuesday morning, about 12 hours after she performed a blues-inspired rendition of “Amazing Grace” on NBC’s The Voice.

Last week, Sarah Grace was voted into the top ten on season 15 of the hit NBC show The Voice. Her performance Monday will help determine whether she is voted into the top eight, which will be revealed on the next episode of the show airing this evening, 7 p.m. CT.

The 16-year-old contestant from Houston performed the hymn “Amazing Grace” mixed with production elements of the blues folksong “House of the Rising Sun” by The Animals. Sarah Grace said her performance was inspired by the Blind Boys of Alabama, a gospel group who previously performed the two songs together. But Sarah Grace made the mix her own by also incorporating a solo on the trumpet, the instrument she studies as a sophomore at the Kinder High School for the Performing and Visual Arts (HSPVA). The performance proved to be a hit, landing Sarah Grace a number three spot on the iTunes top 100 chart on Monday evening.

“I’m feeling really great and excited about how the performance turned out,” Sarah Grace said. She added that going into the performance, she wanted it to be one that she enjoyed and could be proud of.

Sarah Grace’s Houston fans were blown away by her performance. HSPVA has been supporting Sarah Grace all season long and had even planned a watch-party for its students for Monday evening. The school ultimately cancelled the party because the airing of George H.W. Bush’s memorial service delayed the Houston broadcast of The Voice. But Sarah Grace’s friends and fans were still watching the episode from their own homes.

“I loved it a lot, and I just think that when she sings she has so much passion,” HSPVA junior Jenna Hlavaty said on Monday night. “Sarah Grace is so sweet and so brilliant, and I think the decisions she made for this performance show her as a smart musician.”

Hlavaty, who plays the clarinet, is a part of the same band as Sarah Grace at HSPVA.