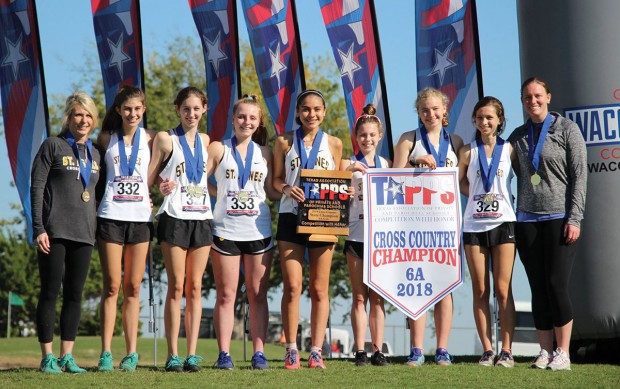 In truly dominant fashion, the St. Agnes Academy Tigers ran away from the field to capture the TAPPS 6A Girls State Cross Country Championship. With five of the eight top finishers, the Tigers finished first by a spectacular 71-point margin. The win also marks the largest margin of victory in TAPPS’ largest classification since back in 1991.

“We talked since August about running as a pack, and we’ve been working on that strategy all season,” said Tigers cross country coach Kristi Robbins. “We ran in a number of really tough races this season against great schools in all levels, so competing at state wasn’t intimidating in the least for our girls.”

Leading the pack of finishers for St. Agnes was senior Jackie Cruz, who finished first in 12:08 over the two-mile course to win the individual state championship. Following Cruz for St. Agnes were Camille Napier (4th), Sara Price (5th), Emily Heinz (6th) and Amelie Born (8th). In addition, Grace Wolfe finished 14th overall. “Jackie ran out fast and took the lead. She ran a great race,” said Robbins. “Then, to have a 40-second spread between your top five runners is pretty tough to beat. I’m so proud of all of them.” 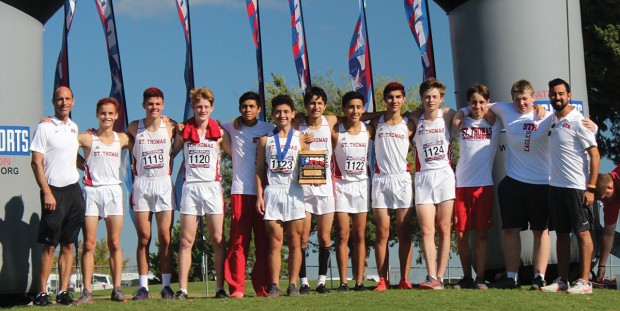 The St. Thomas Eagles ran a tremendous race while finishing a strong second place in the TAPPS 6A Boys State Cross Country Meet. “I was very proud of the way our team came together towards the end of the season,” said Eagles cross country coach Nathan Labus. “We’ve been running on a lot of muddy courses all season, but once we got to dry surfaces at district and state, the guys went out and performed really well.”

In the state meet, junior Blazek Skucius led the Eagles with a 10th-place finish overall. Skucius was followed by Travis Enochs, Nicholas Chandler, Joseph Romero and Isaiah Garza. For the team, the second-place finish was even more impressive considering that the Eagles’ top runner, Juan Vasquez, missed the entire season with a torn labrum.

“Juan would have been at least top ten or maybe even top three at the state meet, which would have been enough of a point swing for us to win a state championship,” said Labus. “It’s unfortunate, but Juan’s been extremely supportive all season and still a big part of our success. The exciting thing is that all five of our top finishers from state will return next year, so we should be in great position to bring back a state championship.” 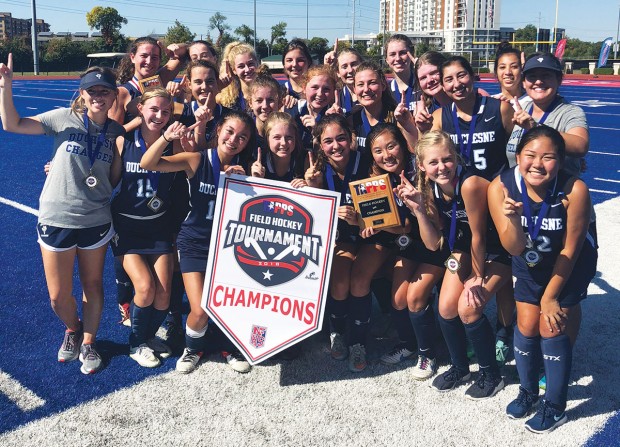 POWERFUL STICKS The Duchesne Academy of the Sacred Heart field hockey team made school history by winning the TAPPS 6A State Field Hockey Championship. The victory marked the first state championship in a team sport for Duchesne Academy.

The Duchesne Academy of the Sacred Heart field hockey team made school history by winning the TAPPS 6A State Field Hockey Championship. With its 6-1 victory over All Saints Episcopal School in the state final, Duchesne Academy won its first-ever state championship in a team sport. “The entire Duchesne community is so proud of this team,” said head coach Jenna Allen. “The girls played with heart and hustle. They worked so hard the entire season.” 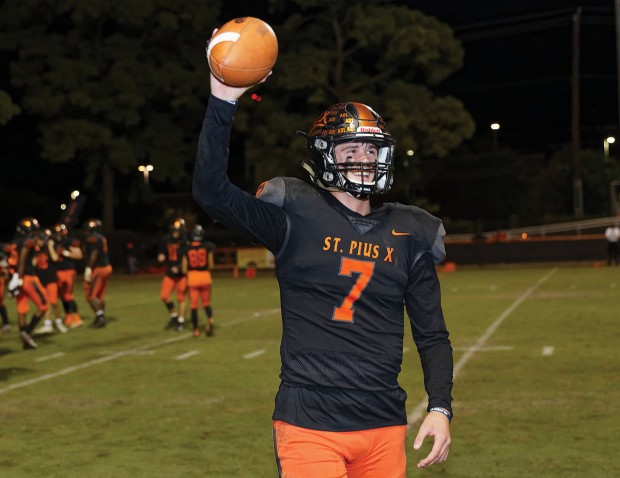 It was a monumental night at St. Pius X High School, as Panthers senior quarterback Grant Gunnell set the all-time Texas high school football record for most career touchdown passes. In the second quarter of the Panthers’ 55-14 victory over San Antonio Antonian, Gunnell connected on his 185th career touchdown pass, breaking the mark held by Refugio High School’s Travis Quintanilla. “It was extremely special for Grant to break that kind of record in front of our community,” said St. Pius X athletic director Jason Kimble.

Despite needing six touchdown passes to break the record in his final regular-season home game, Gunnell set the mark even before intermission with a touchdown strike to wide receiver Kaleb Ducros. “We called a timeout right after the record-setting pass, and our head coach gave him the game ball,” said Kimble. “We put it up on the video board, and Grant’s parents then came out to take photos. It was a tremendous moment.”